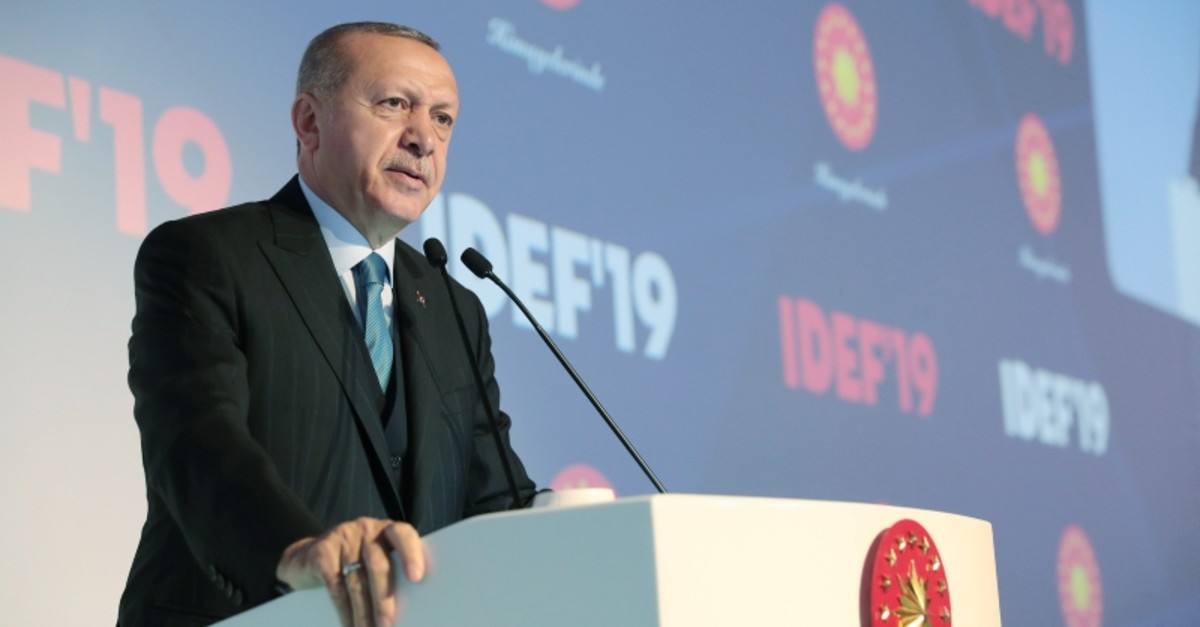 As a crucial partner for the multinational F-35 fighter jet project, Turkey is vital for the success of the program and its exclusion would only lead to the collapse of the entire project

The multinational F-35 stealth fighter program continues with the participation of eight countries, all members of NATO, including Turkey. A major partner of the program, Turkey has faced numerous threats regarding its exclusion from the program because of its decision to purchase the Russian-made S-400 surface-to-air (SAM) missile system.

In his inaugural speech at the 14th International Defense Industry Fair (IDEF'19) in Istanbul, President Recep Tayyip Erdoğan rejected Tuesday the threats regarding Turkey's participation in the F-35 program and warned, "The U.S. F-35 fighter jet program is 'doomed to complete failure' if Turkey's contributions are excluded.

"Turkey did not and will not accept any impositions in the defense realm, just as in the areas of politics, diplomacy and the economy," the president said and continued, "We think those trying to exclude us on an issue that we are a project and production partner can't see beyond the end of this."

Tension between the U.S. and Turkey has heightened in recent months with Turkey set to begin receiving the advanced S-400 system in July, which Washington says will jeopardize Turkey's role in the F-35 fighter jet program and could trigger congressional sanctions.

Turkish officials previously highlighted that it is not possible to remove Turkey from the program without the approval of the other members in the consortium, including Australia, Canada, Denmark, Italy, the Netherlands, the U.K. and Norway.

In June 2018, Turkey received the first two F-35 fighter jets in a ceremony held in Texas, and Turkish pilots started training at Luke Air Base in Arizona. Despite several attempts by U.S. senators to halt the delivery, Turkey was delivered two more jets in April and now has four jets in its possession with four pilots continuing their training program. The jets will remain in the U.S. for training activities and will be shipped to Turkey by November 2019. The country is expected to receive six F-35 jets by 2020. It will receive the remaining 24 jets in the first 30-jet order package by 2024. The country initially ordered 100 F-35 jets.

Turkey has been a partner in the F-35 Joint Strike Fighter project, a consortium of nine countries, since 1999. The Turkish defense industry has been playing an active role in the production of the fifth generation F-35 fighter jets, and the country has spent $12 billion on the project so far.

Turkish companies such as Alp Aviation, Ayesaş, Roketsan, Havelsan, Aselsan, Kale Aviation, Kale Pratt & Whitney and Turkish Aerospace Industries Inc. (TUSAŞ/TAI) not only participated in the production process of the F-35s, they also played an important part in the production processes of all the F-35 fighter jets that have been produced and delivered to member countries up to now.

The president said Turkey has become a leading actor in armed and unarmed unmanned aerial vehicles (UAVs) and has taken steps to make its own fighter jets.

"Hopefully the fleet of our Air Forces will consist of domestically produced combat airplanes soon. We are determined to establish the foundations that will provide for our and our friends' needs in terms of armor, optics, software, motor, simulation and detonating technologies, which are used by others to confront Turkey," the president said and added: "Those who hesitated to sell us the bombs used in our combat aircraft cannot hide their astonishment."

Ismail Demir, the head of the Presidency of the Defense Industry (SSB), highlighted in his speech at the opening ceremony that the projects carried out by the SSB make positive contributions to Turkey's foreign trade deficit as the defense industry exports continue to rise.

"The Presidency of the Defense Industry is following more than 500 cooperation projects in 70 countries as part of international collaboration," Demir said, speaking of the international projects in which the Turkish defense industry takes part.

The IDEF will unveil the defense platforms and systems developed by domestic and foreign companies with cutting-edge technology, Demir noted. He emphasized the importance of having a strong defense industry given the fragile region Turkey is in. "Today, the Turkish Armed Forces is using helicopters, unmanned aerial vehicles, military ships, armored vehicles, missiles and other platforms developed and manufactured by the Turkish defense industry," he said.

Turkish Armed Forces Deputy General Manager Sadık Piyade highlighted that the IDEF is one of the largest four defense fairs in the world. He also noted that around 70 deals will be signed during the event and 4,420 meetings were scheduled.