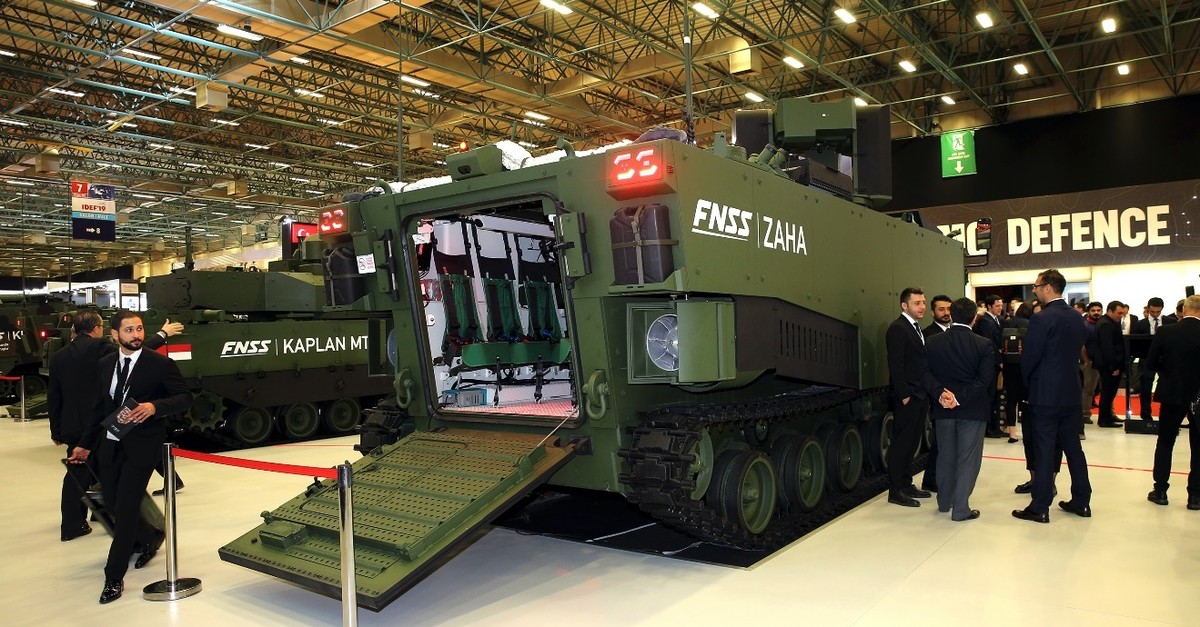 A prototype of armored amphibious assault vehicle, ZAHA, which is manufactured by FNSS, one of Turkeyu2019s leading defense contractors, is being showcased at the International Defense Industry Fair (IDEFu201919), Istanbul, May 1, 2019.
by Daily Sabah with AA May 02, 2019 12:07 am

The Turkish defense industry continued to unveil innovations on the second day of the giant international defense fair in Istanbul, which has also witnessed the signing of several defense agreements

Having already proved its skills in the international arena with a number of major platforms and systems it has developed in recent years, the Turkish defense industry is now showcasing its new innovations as well as new versions of previously developed products at one of the world's leading defense fairs, the International Defense Industry Fair (IDEF'19). Having gone through a busy first day on Tuesday, marked by a number of deals, the giant exhibition yesterday also witnessed the signing of multiple agreements. Over 70 countries, 148 delegations from three international institutions, over 480 local firms and 580 foreign companies are attending the four-day event, hosted by the National Defense Ministry under the auspices of the Presidency of the Republic of Turkey and the management and responsibility of the Turkish Armed Forces Foundation.

About 250 Turkish participants are small and medium-sized enterprises (SMEs).

For instance, a new national laser gun, developed by the Scientific and Technological Research Council of Turkey (TÜBİTAK) that can be mounted on Turkey's first locally designed and produced assault rifle, the MPT-76, was introduced.

The Rifle Mount Laser (TÜMOL), which has a deterrent effect up to one kilometer, will provide great advantages to Turkish Armed Forces (TSK), according to a statement by the Industry and Technology Ministry yesterday.

Speaking about the product, Industry and Technology Minister Mustafa Varank said: "It turns electricity into laser light. It has a very high effect at a short distance. Doesn't make a sound. Can be seen with an infrared camera. It can penetrate steel on the deck of a ship at a power level of 20 kilowatts."

Having a power level of up to 500 watts and a destructive laser light, the TÜMOL can be used effectively against many different types of targets, from handmade explosives to drones, according to the minister.

On the other hand, one of the leading defense manufacturers, FNSS, introduced its armored amphibious assault vehicle, the ZAHA.

The vehicle was designed to meet the requirements of the Turkish Naval Forces, said Nail Kurt, CEO of FNSS, on the sidelines of the fair. Speaking at the ZAHA prototype launch, he noted that the armored amphibious assault vehicle could only be produced by a limited number of countries.

Kurt added that as part of this project, FNSS would produce 27 vehicles. "Deliveries start in 2021 and complete in 2022," Kurt said, noting that the 21-personnel-capacity ZAHA's tests will be completed within two years.

With its extensive experience and know-how in missiles, ROKETSAN plans to produce tank munitions to meet the needs of the market by designing several alternatives, such as mounting the Tanok on ground vehicles or using it as a man-portable missile.

The long-range Tanok shell can strike targets 1 to 6 kilometers away.

İsmail Demir, the head of the Defense Industries Presidency (SSB), said the Altay project is a joint effort with several other corporations.

The SSB also signed a protocol with Turkish Airlines (THY) for logistics cooperation and an agreement with ASELSAN for low-altitude radar systems.

To meet the needs of the Ukrainian Armed Forces, ASELSAN and SFTE Spets Techno Export, a subsidiary of the Ukrainian state-owned defense industrial group Ukroboronprom, inked contracts for the sale of ASELSAN software-based military radio family and the supply of ASELSAN's Thermal Camera for the anti-tank missile system.

The agreement was said to have been signed between MKEK and Spets Techno Export. Thus, the two sides have agreed on the price of the missiles and final delivery process, while first delivery is expected in the upcoming weeks.

Zambia's defense minister praised his country's bilateral relations with Turkey and hoped that defense ties between the two countries would strengthen in the future. "Relations between Turkey and Zambia are so far so good," Davies Chama was quoted as saying by Anadolu Agency (AA) on the sidelines of IDEF'19.

"Heads of states have developed a personal relationship, which has enhanced ties between the Republic of Turkey and the Republic of Zambia," he said. "Interaction [between the two leaders] has been excellent," Chama said, referring to the recent state visit of President Recep Tayyip Erdoğan to Zambia and Zambian leader Edgar Lungu's visit to Turkey. At the invitation of Erdoğan, Zambian President Lungu attended Erdoğan's inauguration ceremony in Ankara after being re-elected president last June. In July, Erdoğan visited Zambia and met his counterpart in the first-ever official visit by a Turkish president to the south African country. During the visit, the two countries signed pacts to boost ties in sectors such as agriculture, stockbreeding, fishery, tourism, investment, sports and diplomacy.

"Framework agreements on defense issues between Turkey and Zambia have been finalized now. I hope that during my visit, we should be able to sign those agreements," the minister said. The Zambian defense minister hailed the "high-quality" products at the fair. "So far, I can see the high-quality products. You know Turkey is a part of NATO. There is no doubt in my mind that the products that I could see at this fair are of high quality," he said. He said that his country is looking at ways to "cooperate mutually and develop our defense industry together with the Republic of Turkey."