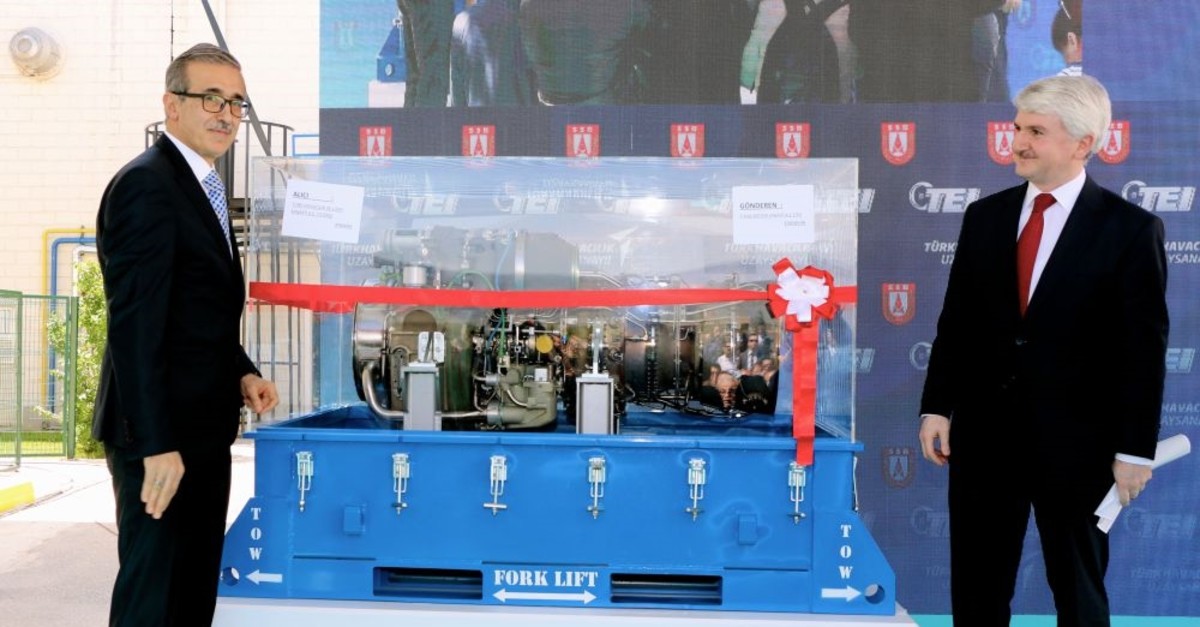 Def. Industries Pres. u0130. Demir (L) and TUSAu015e Engine Industries General Manager M.F. Aku015fit participated in the ceremony held for the delivery of first domestically developed turboshaft engine that will power the domestic Black Hawk helicopters to TAI
by Daily Sabah May 14, 2019 12:02 am

The first domestically designed and manufactured turboshaft helicopter engine was delivered to Turkish Aerospace Industries. The developer TEI will export the engine as part of a license deal with General Electric

Designed and manufactured by TUSAŞ Engine Industries (TEI), the first domestically produced T700-TEI-701D engine, which will power the domestic Black Hawk helicopter, was delivered to Turkish Aerospace Industries (TAI). The delivery took place at the TEI premises in the central Anatolian province of Eskişehir yesterday at a ground-laying ceremony for TR Engine, a new research and development center for turboshaft engines. Defense Industries President İsmail Demir, in his address at the ceremony, expressed that the companies investing in Turkey and partnering up with Turkish firms will reap their rewards. With regards to the engine design, Demir said that Turkey has taken concrete steps. He also noted that the activities on engine development for the domestic helicopter and the T129 ATAK Tactical Reconnaissance and Attack Helicopter are underway.

He particularly emphasized Turkey's necessity for turboprops, turbojets and turbofans.

Eskişehir Gov. Özdemi Çakacak drew attention to the significant role TEI plays in the development of a domestic defense industry.

"Today, we are witnessing the delivery of a locally manufactured turboshaft engine that will power the domestic Black Hawk helicopter. This success proves that Turkey has the know-how and experience for a bigger project," the governor said.

TEI General Manager Mahmut Faruk Akşit also noted that the domestic Black Hawk is being developed by TAI, TEI and ASELSAN. Akşit highlighted that 236 turboshaft engines will be delivered to the Turkish military within the specified period of 20 years.

"T700-TEI-701D is the first domestically produced helicopter engine with 2,000 horsepower and will power the Gökbey multipurpose helicopter."

The research and development center, which started construction yesterday, will carry out development activities of the turboshaft engine.

According to a previous release by the U.S. giant General Electric (GE), TEI has the export licenses for the turboshaft engine and will be able to sell it abroad.

In 2016, TAI signed a $3.5 billion agreement with Sikorsky Aircraft. As part of the deal regarding the Turkish Utility Helicopter Program, 109 T-70 type Black Hawk helicopters will be produced and delivered to the Turkish Air Forces, Turkish Armed Forces, General Commandership of the Gendarmerie, Special Forces Command, the Security General Directorate and the General Directorate of Forestry within the next 10 years beginning from the date of the deal. TAI is responsible for manufacturing, final assembly operations, tests and integrated logistic support of all airframe structures and composite rotor blades.

In addition to TAI's work scope, TEI-Turkish Engine Industries builds engines under a license of General Electric (GE). Aselsan will develop and integrate avionics and will co-develop with Sikorsky Aircraft an enhanced digital cockpit known as the Integrated Modular Avionics System (IMAS); Alp Aviation is responsible for production and assembly of landing gears, gearbox and dynamic components.

Within the scope of the Turkish Utility Helicopter Program, Turkey's requirements will be met and the Turkish industry will play a significant role in fulfilling domestic needs in military and civilian areas.