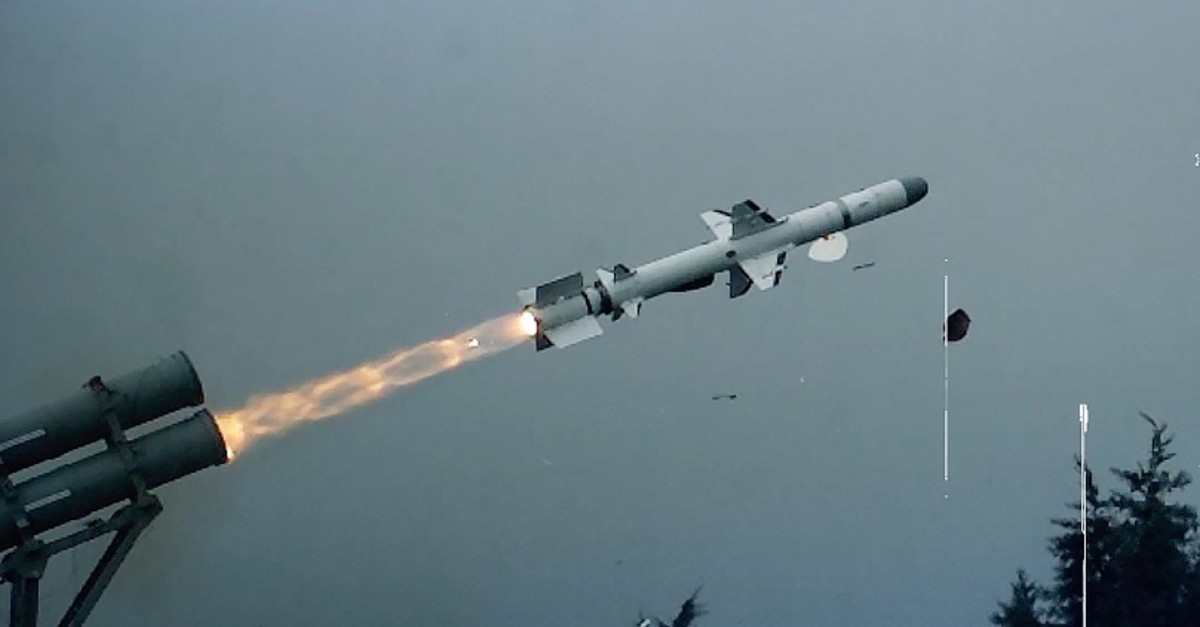 Developed by major Turkish defense contractor Roketsan, the first domestic maritime missile ATMACA, will be first integrated into the MILGEM (National Ship) corvettes.
by Daily Sabah with AA
May 14, 2019 12:02 am

Marked as a weapon system ready for service in modern naval platforms with its long range, low track and high target hit sensitivity, ATMACA is expected to lead to a new era in the field of surface-to-surface missiles.

The anti-ship missile, whose development dates back to 2009, completed its tests successfully in November 2018 and a deal for the missile's mass production was signed between the Presidency of Defense Industries (SSB) and Roketsan last year.

ATMACA, a modern guided missile that can be used in any weather, can be effective against fixed and moving targets thanks to its resistance to countermeasures, target update, re-attack, and task cancelation capabilities, and advanced routing system (3D routing).

The launch control systems and other equipment for the missile were produced by Turkish defense giant ASELSAN, while the fire control system was developed by the Turkish Naval Research Center Command (ArMerKom). The domestic missile was showcased at one of the world's leading defense fairs, the International Defense Industry Fair (IDEF'19) in Istanbul.

The missile has a range of up to 250 kilometers and hovers low above the water and can reach the target both on a linear and a vertical plane. With this feature the missile can reach a higher altitude when it gets closer to the target and land on the target ship from right above. The target of the missile can be changed even after the missile's launch while it is highly protected against electronic jamming.

Works on integrating ATMACA guided missile into the platforms of the Naval Forces inventory are underway, while firing tests are planned to be carried out in the near future.

Thanks to ATMACA, ROKETSAN will become the supplier of a critical system that will create the strike force of ships. There are only a limited number of solutions in the same class as ATMACA in the world.

"With the ATMACA missile, our ships will have a national power and their deterrence will increase significantly. This is done with an entirely national missile. It is a huge gain for our country," he added, pointing out that the launch of the project led to a decision to build an ATMACA missile with longer-range and a turbojet engine.

"This decision was very important. Because with these changes, ATMACA has become a much more advanced guided missile than its counterparts in the world," he further stressed.

He said that with a data link, a feature that separates the domestic missile from its likes in the world, the missile's task can be updated from a relevant authority, which can be a ship or a station, after the launch.

"So, it does not have to go back to its initial destination, meaning that you can give a new goal or cancel the task if the circumstances change," he continued. "This crucial feature highlights ATMACA compared to its counterparts. I can also say that we are one of the guided missiles that go the remotest range. We may take the lead in this scope. In this sense, we think we have achieved great success. We are also pleased to bring ATMACA to our navy and to our country."

Stressing that they were in the phase of conducting qualification studies on the mass production line, Özdemir said the ATMACA missiles will be seen on Turkish ships in a year or year and a half.

"We will give the ATMACA missile to all ships slowly under the planning of the Presidency of Defense Industries and the navy," he said. "Thus, with the active usage of this missile, we will attain an environment in which the Turkish Navy's deterrence is increased. ATMACA has great potential and superior features to its likes in the world. I think export is possible if the right conditions occur."