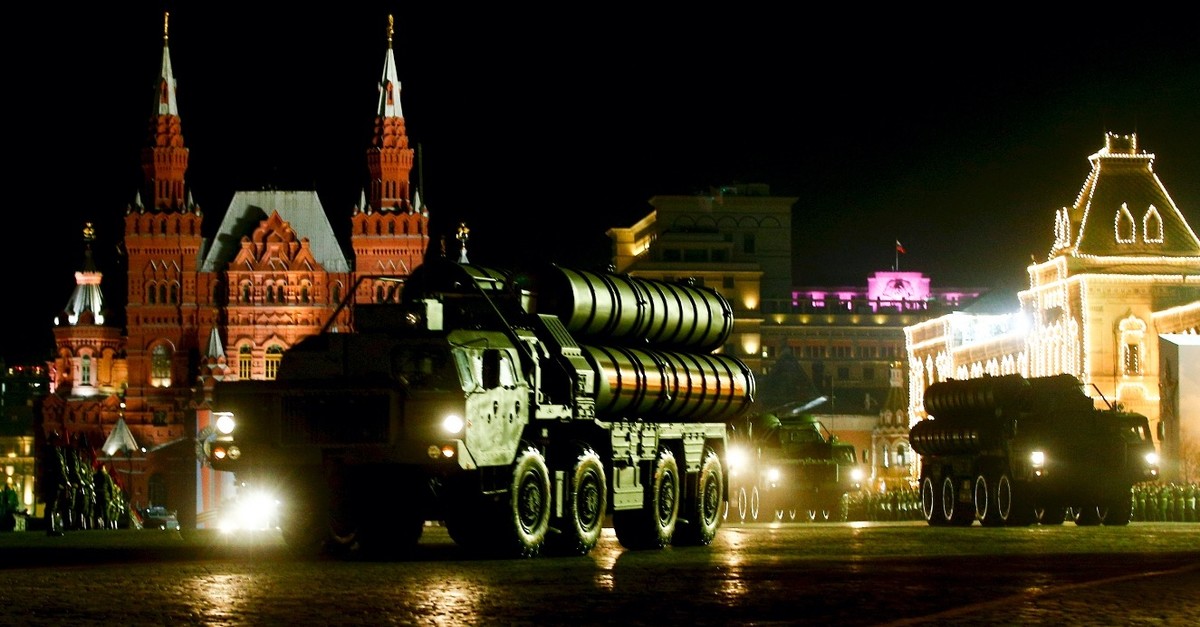 Russian servicemen drive the S-400 missile air defence systems during ceremonies in Red Square, Moscow, marking the 73rd anniversary of the victory over Nazi Germany in World War II, May 9, 2019.
by Daily Sabah May 23, 2019 12:13 am

Turkish soldiers are currently training in Russia on the use of the S-400 missile system, which will be delivered to Turkey in less than two months, while tension over the Russian-made defense system with NATO ally U.S. is still in the air

With less than months left for delivery of the Russian-made surface to air missile (SAM) S-400 system to Turkey, Turkish military personnel are currently in Russia, participating in training on how to use the Russian missile system, Defense Minister Hulusi Akar said late Tuesday. "We've sent personnel to Russia for S-400 training that will begin in the coming days and will span the following months," Akar told a group of journalists. "We need to set up an air defense system to protect our 82 million people and our country," Akar said, stressing that Turkey was under threat of air and missile attacks from the Syrian borders.

Turkey's region abounds with ballistic missile proliferation and rogue weapons of mass destruction (WMD) programs, as well as increasing terror threats by groups in northern Syria, including Daesh and the People's Protection Units (YPG) – the latter being the Syrian affiliate of the PKK, a terrorist group designated as such by Turkey, the U.S. and the EU. In due consideration of regional and global developments that pose grave risks to its national security, Turkey decided to meet its need for an air defense system from Russia and inked a $2.5 billion deal with Moscow in December 2017 after the U.S. repeatedly rejected selling Patriot missiles to Turkey.

Noting that S-400 systems only have defense capabilities, Defense Minister Akar said "no one should be bothered" by their use by Turkey.

Akar said the U.S. was still trying to dissuade Turkey from purchasing the Russian-made missiles, but Ankara was determined to go through with the deal. "We tell them it's a 'done deal' but they keep telling us 'no deal is a done deal'," the minister added.

"We are doing whatever normal bilateral agreements mandate. Though there are some issues from time to time, we are pleased that there has been no sharp turn until now... Turkey is also making preparations for the potential implementation of Countering America's Adversaries Through Sanctions Act (CAATSA) sanctions," he said.

The defense minister warned against attempts to relate the delivery of F-35 stealth fighter jets to Turkey with the country's purchase of the S-400 SAM system. He emphasized that the F-35 fighter jet was developed under an ongoing joint project, noting that Turkey had military personnel in the U.S. to receive training and for the planes' maintenance.

"We as the Republic of Turkey fulfill our responsibilities in a serious and sincere manner," he said, adding that the jets would later be deployed in Turkey's eastern Malatya province.

Turkey currently has four F-35 fighter jets in its possession but they are located at Luke Air Base in Arizona where four Turkish pilots are training for the use of the jets.

Turkey has been a partner in the F-35 Joint Strike Fighter project consortium since 1999, along with seven other countries – all members of NATO. The Turkish defense industry has been playing an active role in the production of the fifth generation F-35 fighter jets, and the country has spent $12 billion on the project so far. The country is expected to receive six F-35 jets by 2020. It will receive the remaining 24 jets in the first 30-jet order package by 2024.

Over the purchase of the S-400 missile system, Turkey and the U.S. have entered a prolonged period of strained ties and the tension has continued to flare up in recent months as the delivery of the Russian-made system to Turkey draws near.

Turkey responded it was the U.S.' refusal to sell Patriots that led it to seek other sellers, adding that Russia offered a better deal, including technology transfers.

When Turkey wanted to buy the Patriot system from the U.S. in 2009 during Barack Obama's term, the U.S. Congress declined the offer for the sale of the Patriot PAC-3 batteries worth $7.8 billion at the time.

Not selling the necessary missile systems to its NATO allies, Washington continued to provide extensive arms support to terror groups in Syria that have continuously attacked Turkey and claimed hundreds of lives. However, Turkey's firm stance on the S-400 deal has led U.S. officials to make Turkey an offer for the Patriot defense system at a much lower cost.

In January, the U.S. made an official offer to Turkey for a $3.5 billion sale of the Patriot missile and air defense systems during the visit of a U.S. delegation. The provision of credits, technology transfer and joint production were discussed during the visit. Defense Minister Akar noted that the U.S. delegation renewed their proposal at the end of March, updating some contractual terms including price, technology transfer, joint production and technology update.

The proposal came during his visit to France with Turkish President Recep Tayyip Erdoğan, he said, adding that a deal could be reached in the coming period as a symbol of "Turkish-French goodwill."