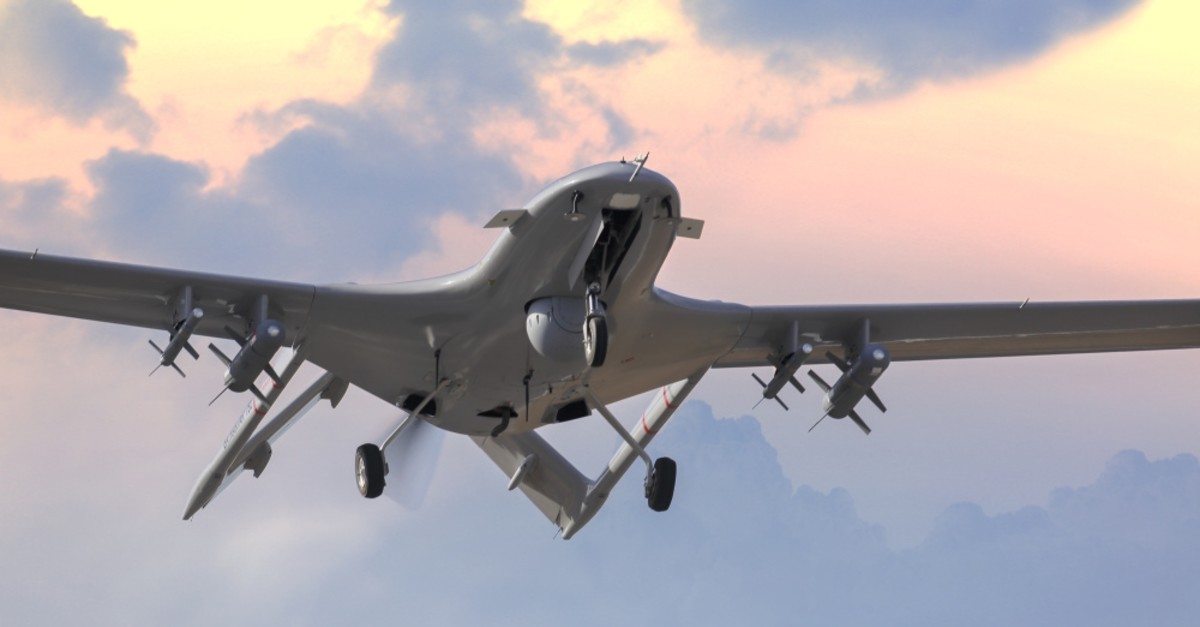 With a successful run in counterterror operations both at home and abroad, Turkey's domestically developed Bayraktar armed drone recorded a flight time of over 100,000 hours, a first in Turkish aviation history and a rare feat in the world

Turkey's indigenous armed drone Bayraktar Tactical Block 2 (TB2) has set a new record in Turkish aviation by completing a flight time of over 100,000 hours. A statement released by Baykar Makina highlighted that the armed unmanned aerial vehicle (UAV) Bayraktar TB2 has become the first domestically developed aerial vehicle to log such an extensive flight time. The Bayraktar TB2, manufactured by Baykar Makina, is one of the world's best-armed UAVs considering its capabilities and performance in Turkey's counterterror operations. The drone was first delivered to the Turkish Armed Forces (TSK) in 2014 and upgraded with armament for the first time in 2015. It is currently used by the Gendarmerie General Command, General Directorate of Security Forces and the National Intelligence Organization in their operations.

Turkish security forces have been deploying 86 armed Bayraktar TB2 in their military operations both at home and abroad since 2014. The Turkish military deployed Bayraktar TB2 in operations Hendek (Trench), Euphrates Shield and Olive Branch, helping experts achieve operational goals before the planned period and reducing casualties. Baykar Makina's armed drone performed more than 90 percent of all the aerial operations, flying over 5,300 hours.

With its advanced electronics, software, aerodynamic, design, submain systems, as well as flight automation and performance, the Bayraktar TB2 stands out as one of the most advanced UAV systems in its class.

The successful performance of the Bayraktar TB2, which has been followed closely by the global aerospace and defense sector, has accomplished Turkey's first export of an aerial vehicle fully developed by domestic means, taking one of the most important steps in the history of Turkish aviation.

In January, Bayraktar had signed an agreement with Ukrainian company Ukrspetsproject on the purchase of 12 Turkish Bayraktar TB2s for the Ukrainian army. Bayraktar also signed a deal with Qatar to sell six drones for the Qatari forces in March 2018. The negotiations for the export of the Bayraktar TB2 also continue with other countries.

Selçuk Bayraktar, chief technical officer of Baykar Makina, said in a statement the flight time of over 100,000 hours is a significant aviation success, stressing that only a couple of countries have so far accomplished this. He further noted that Turkey is one of the three countries that effectively use unmanned aerial vehicle technology.

"We continue to work with a view to developing far better systems than Bayraktar TB2," Bayraktar said.

Baykar Makina is currently developing a two-engine armed drone Akıncı, which is dubbed "the flying fish" given its shape and will start test flights soon. The Akıncı armed drone will be equipped with domestically developed sightline and satellite communication system, electronic support pod, multipurpose air radar, synthetic aperture radar and meteorological radar. The platform will operate with various ammunition configurations.

The Akıncı system can reach an altitude of 40,000 feet and has the capability of flying for 24 hours straight. It has a capacity of useful load of up to 350 kilograms. With these features, Akıncı can perform some of the duties of fighter jets.

Baykar General Manager Haluk Bayraktar stated that this success, which is important for Turkish aviation history, is a great source of pride for the Baykar family, "The Bayraktar TB2 armed unmanned aerial vehicles system has achieved many firsts through its technical features and export success. It has become one of the biggest supporters of our security forces in the field. In addition, it has been a first for our country that a national air vehicle completed 100,000 hours of successful flight. As the Baykar team, we are presenting this success to the Turkish nation who has always loved and supported us."

Bayraktar underlined that Bayraktar TB2 has attracted the world's attention with its success in Turkish Armed Forces (TSK) operations, saying that demands for exports are on the rise.

Emphasizing that they struggled against obstacles similar to those inflicted on Vecihi Hürkuş and Nuri Demirağ, Bayraktar noted, "However, with the vision of the National Technology Movement, we have always striven to go forward. The success of the national armed UAV, which was completed with a 93 percent local content ratio, is very important in terms of showing the place where our country and defense industry have reached. Due to this success, many countries in the world are interested in Bayraktar TB2 armed UAV systems. This year, we exported and delivered to two countries in Europe and the Middle East. In the coming period, we will focus more on exports to regions where we believe there is a potential and increasing demand, such as Europe, the Middle East, Far East and Central Asia."

The Bayraktar TB2 system, which has fully autonomous taxi, take-off, normal cruising and landing capability with its three-redundant avionics systems and sensor fusion architecture, has been actively used since 2014 as the first national tactical unmanned aerial vehicle system included in the TSK inventory.

The Bayraktar TB2, capable of carrying four MAM-L and MAM-C missiles produced by Roketsan on its wings, can make precise targeting with its built-in laser target marker.

This makes Turkey one of the six countries in the world producing its own armed drones and ammunition. The national drone, which was completed with a 93 percent local content ratio, is a system that offers a fast "see-and-shoot" all-in-one solution in order to prevent possible damage to areas close to the target. Armed for the TSK, the system enables reconnaissance, continuous aerial surveillance, target detection and destruction.

The company engages in engineering operations in five main areas, including electronics, software, communication systems and design of air vehicles with a team of young engineers. Domestically developed UAVs are manufactured at Baykar's facility in Istanbul.