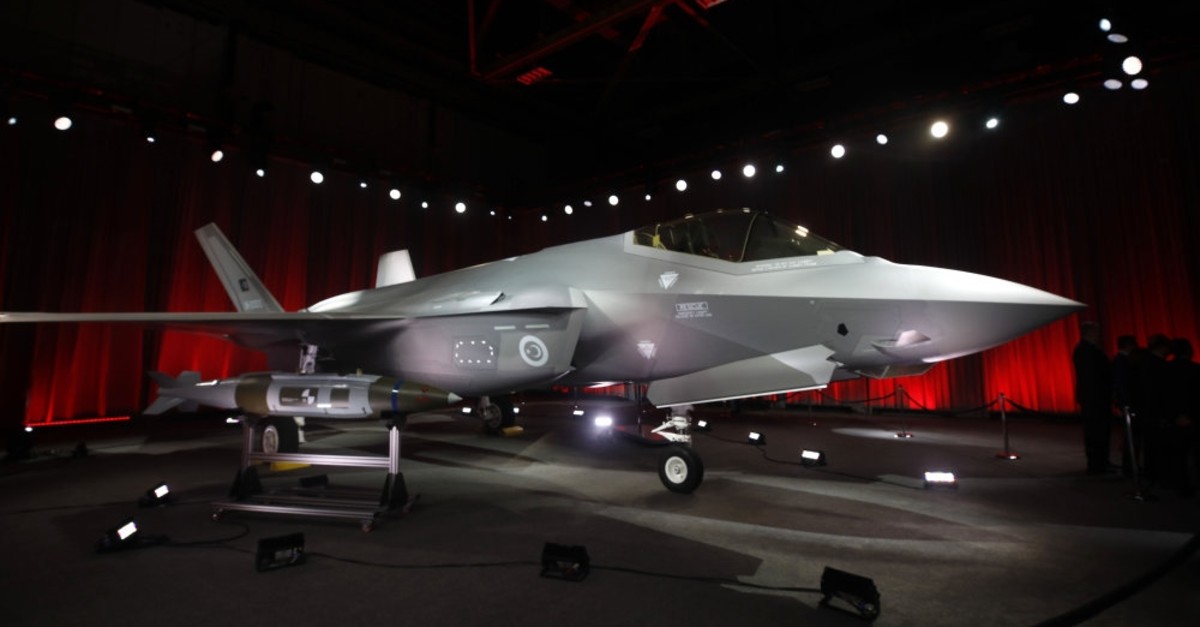 Although Turkey has received four F-35 stealth fighter jets in the last year and sent Turkish pilots and engineers to Arizona for training, the U.S. removed Turkish partners from the program over its S-400 missile system purchase from Russia.
by Daily Sabah Jul 19, 2019 12:07 am

Turkey's removal from the F-35 program over its purchase of the S-400 system is the result of U.S. policies that do not conform to alliance decorum. Albeit a grave mistake on the U.S. part, open dialogue could still be maintained between the two NATO partners

Ankara has censured the U.S.' decision to remove Turkish partners from the $428 billion F-35 stealth fighter jet program over the country's purchase of S-400 surface-to-air-missile system from Russia. "This unilateral step is incompatible with the spirit of alliance and does not rely on any legitimate justification," the Foreign Ministry said in a statement, rejecting Washington's claim that Turkey's purchase of the S-400 system would weaken the F-35 program.

While the U.S. continues to ignore the fact that Turkey's decision to buy S-400 missiles was the result of Washington's policies that have damaged bilateral relations, particularly in the last five years, it needs to acknowledge that Ankara made a sovereign and independent decision to protect is interests and ensure the country's national security to the maximum extent. The efforts of Turkish officials to maintain an open dialogue on the S-400 purchase and Turkey's participation in the F-35 program as a 67-year member of NATO have been left unanswered by U.S. officials. "The fact that our proposal to establish a working group with NATO to discuss this issue has been left unrequited is the most obvious indicator of the prejudice on the U.S. side and the lack of will to resolve this issue in good faith," the ministry said.

Turkey has been a partner in the F-35 Joint Strike Fighter project, a consortium of nine countries, since 1999 and one of the major partners of the program with more than 10 companies manufacturing nearly 900 parts for the fighter jets. Initially having ordered 30 F-35 jets, Turkey intended to buy 116 stealth fighter jets and the country has already received four of them. However, although Turkey has fulfilled all the necessary financial commitments to the program, its four F-35 fighter jets will not be delivered and the Turkish pilots will return to home by July 31 since their training has been suspended.

"Turkish companies have fully delivered their commitments to F-35 program and they will continue to do so," the head of Turkey's Defense Industry Directorate İsmail Demir said yesterday.

Demir said the move was unilateral and not in line with the agreement signed between the parties, and added that Turkey would continue meeting its commitments until its exclusion from the program is finalized.

"Other countries involved in the F-35 program would face extra costs of $7 million to $8 million per jet as a result of the move," he said and underscored that Turkish companies are continuing to produce.

Demir also said Turkey will not purchase foreign defense equipment from now on unless it is absolutely necessary.

Shifting the production to U.S. facilities would also come at a cost. The status of the money Turkey put down to purchase the fifth-generation aircraft is uncertain, however, with the Pentagon official saying only that they are "discussing the specifics about the aircraft they have purchased so far."

Turkey stands to lose over $9 billion in program work share from the over 900 parts it was to make over the life of the program, Lord added.

US actors should be reasonable, cooperate with Turkey

After the blatant military support of Turkey's long-standing NATO ally, the U.S., for terrorist groups in northern Syria and its decline of Ankara's offers to buy air defense systems, Turkish state seized other opportunities to fortify its defense capability against threats emanating from increasing clashes and conflicts in its immediate region and decided to purchase the Russian-made S-400.

In addition to U.S. support for terror groups in Syria that pose grave risks to Turkey's security, the purchase of the S-400 has been the most-debated cause of strained Turkish-American relations for the last two years.

Despite U.S. President Donald Trump's sound statements that clearly outlines why Turkey had to purchase a Russian-made defense system as a NATO country, the U.S. State Department, the Pentagon and U.S. Congress have not refrained from exacerbating the tension with unreasonable policies toward Turkey.

Trump made a public and supportive statement concerning Turkey's situation, which he described was the result of his predecessor Barack Obama's policies. During a G20 meeting with President Recep Tayyip Erdoğan in late June, the U.S. president said on Tuesday that the current situation with Turkey over the F-35 jets was not fair, as the country wanted to buy U.S. Patriot missiles before but Washington refused at the time.

"Trump acts reasonably when it comes to the American policy toward Turkey, however the rest of the actors, including the U.S. State Department, the security bureaucracy in the U.S. and some members of U.S. Congress, prefer unreasonable policies, undermining the established Turkish-American alliance," Kemal İnat, a Turkish foreign policy and international relations scholar at Sakarya University, told Daily Sabah.

"The Pentagon and the U.S. State Department paired with several Congress people are making immense efforts to damage Turkey's relations with the U.S. and NATO," he explained.

But the reason for their irrational policies lies under their immense efforts targeting the Turkish government.

"By removing Turkey from the F-35 program until the deliveries of S-400 parts take place, they aim to aggravate the tension in the bilateral ties and alienate Turkey from the NATO alliance," İnat said.

"This clique in the American diplomacy and the security bureaucracy, he remarked, intensifies the pressure on the Turkish government and the S-400 has become the most useful instrument for them. They even compel the U.S. president to develop a certain attitude toward Turkey and remove it from the F-35 program, but their primary aim is to corner Turkey and weaken the government," he underscored.

Commenting on the NATO Secretary-General Jens Stoltenberg's remarks, İnat also stressed that NATO is well aware of Turkey's importance as both have benefited from a mutually inclusive relations for more than six decades.

"Stoltenberg and Trump," İnat stated, "represent the rational policy makers in the West when it comes to Turkey."

Speaking at the Aspen Institute's annual security forum in Colorado, Jens Stoltenberg said he was concerned over Turkey's expulsion, as he highlighted the country's countless contributions to the bloc.

"I am concerned about the consequences of the Turkish decision because it means Turkey will not be part of the F-35 program," he said and added, "It is not good, it's bad for all of us."

"Turkey's contribution to NATO runs much deeper and much broader than the F-35. That is important," said Stoltenberg, adding the international coalition in Syria was able to defeat Daesh because of the contributions of Turkey.

İnat recalled that Turkey made a sovereign and independent decision to buy a Russian-made defense system, which the country was gravely in need of.

"Numerous efforts to buy a U.S.-made system backfired and the U.S. partners continued to support terror groups threatening Turkey. Therefore, the country made a decision to safeguard national interests and ensure its security."

When Obama supplied massive arms to the People's Protection Units (YPG), the Syrian affiliate of the PKK terrorist group, in late 2015 as part of a train-and-equip program in the fight against Daesh, Turkish-American relations witnessed a new low point. The PKK is a U.S. and EU-designated terrorist group that has been threatening Turkish national security for the last four decades and its members have killed thousands of civilians and soldiers in the country

During Obama's term, U.S. Congress declined the sale of the Patriot PAC-3 batteries worth $7.8 billion at the time to Turkey.

Not selling the necessary missile systems to its NATO ally, Washington continued to provide extensive arms support to terror groups in Syria that have continuously attacked Turkey and claimed hundreds of lives.

In January, the U.S. made an official offer to Turkey for a $3.5 billion sale of the Patriot missile and air defense system during a visit of a U.S. delegation.

In a statement on Wednesday, the Turkish Foreign Ministry once again called on the U.S. to stand by its commitment to its strategic partnership with Turkey, which it said must go beyond just words, especially in the fight against terror groups such as Daesh, the PKK, YPG and the Gülenist Terror Group (FETÖ). "We call on the U.S. to take back this mistake, which is bound to inflict irreparable harm on our relationship," the ministry said.

The future of Turkey's rapport with the U.S. and NATO, İnat elaborated, now depends on whether the parties within U.S. diplomacy and the military bureaucracy, which have been hostile toward Turkey in recent years, will acknowledge that Turkey is an independent country. "Without further intensifying the tension, these parties should work to establish security cooperation with Turkey on an equal basis and any cooperation between the Western partners and Turkey should be based on mutual respect of sovereignty and independence," İnat said.

Commenting on Turkey's removal from the F-35 program and the recent tension in Turkey-U.S. relations, Turkish Heritage Organization (THO) President Ali Çınar told Daily Sabah that Turkey will certainly take steps to protect its rights related to the F-35 program. "However, the security cooperation between the two NATO allies might further be damaged. The continued dialogue between Turkish and American presidents will prevent the crisis from further escalation," he remarked.

The Turkish lira was steady Thursday, shrugging off the U.S. decision to remove Ankara from the F-35 fighter jet program after it began receiving delivery of the Russian S-400 missile defense system last week.

Işık Ökte, a strategist at TEB Yatırım/BNP Paribas, said the statement from the Pentagon on Wednesday regarding Ankara's removal from the F-35 program was more moderate than expected. "It is seen as certain that the U.S. will impose CAATSA sanctions but a much harsher statement could have been made by the Pentagon," he said, referring to a 2017 law known as the Countering America's Adversaries Through Sanctions Act (CAATSA).

The lira's decline has been stemmed by lower domestic demand for dollar, uncertainty over an expected interest rate cut by the central bank on July 25, as well as an increased global risk appetite on expectations that the U.S. Federal Reserve will lower rates, Ökte said.