Ankara's S-400 purchase from Russia a priority for national security 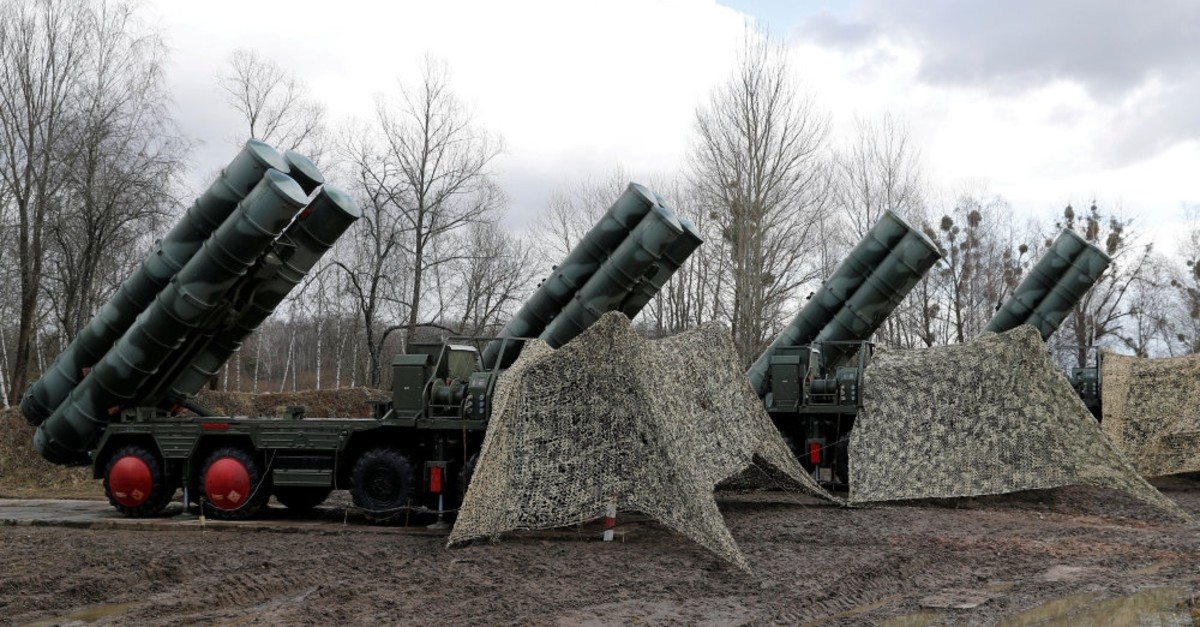 Turkey's decision to acquire the Russian S-400 missile defense system is a matter of national security, President Recep Tayyip Erdoğan once again reiterated on Friday, emphasizing the country's resolute determination to mobilize all resources to implement security priorities. The president, during his address to the ruling Justice and Development Party's (AK Party) provincial heads meeting in the capital Ankara, also called on Turkey's ally the U.S. to act with common sense and to come to terms with Turkey's most pressing security concerns. As a member of the 70-year-old NATO alliance, Turkey's move to purchase a critically important Russian-made defense system has been the top issue that has spurred contention between Ankara and Washington for more than a year. The latter even removed Turkey from the multinational defense F-35 Joint Strike Fighter program, of which Turkey is a reliable production partner. In a clear response to the threat of sanctions and Turkey's removal from the F-35 program, Erdoğan said, "Sanctions by the U.S. or Turkey's removal from the F-35 fighter jet program will not deter Ankara from fulfilling its security needs."

The president said he hoped U.S. officials would be "reasonable" on the question of sanctions, adding that Turkey may also reconsider its purchase of advanced Boeing aircraft from the United States.

"Are you not giving us the F-35s? Okay, then excuse us, but we will once again have to take measures on that matter as well and we will turn elsewhere," he said.

"Even if we're not getting F-35s, we are buying 100 advanced Boeing aircraft, the agreement is signed... At the moment, one of the Boeing planes has arrived, and we are making the payments, we are good customers," he said, adding, "But, if things continue like this, we will have to reconsider this."

Although the U.S. suspended Turkey's participation in the F-35 program, partners in Washington, elsewhere in Europe and in NATO are well aware that Turkey cannot be alienated from the alliance as the stakes would be higher – a fact acknowledged on many occasions by NATO Secretary-General Jens Stoltenberg and Pentagon officials. Therefore, Ankara and NATO will have to work to prevent an identity crisis within the pact and eliminate further geopolitical risks.

Turkey also has a domestic fighter jet project, the TF-X national combat aircraft. Defense experts suggested that the country should accelerate the development process of the TF-X project to compensate for its removal from the F-35 program.

Erdoğan also stressed that Turkey will start using the S-400 missile system in April 2020 after the completion of training and assembly operations.

Meanwhile, the Defense Ministry said on Thursday the first part of the delivery of the Russian S-400 missile defense system has been completed. The ministry said the 30 planeloads of S-400 hardware and equipment were delivered to the capital Ankara from Russia as part of the first batch.

"There could be more sanctions to follow, but frankly, what we'd really like is the S-400 not to become operational," Pompeo told Bloomberg in an interview. "That's our objective."

"It's what we've been talking with the Turks about for months and months. We've told them that it's simply incompatible with the F-35."

U.S. President Donald Trump reportedly told Republican senators during a closed-door White House meeting Tuesday that he is not in favor of implementing penalties within the framework of the Countering America's Adversaries Through Sanctions Act (CAATSA) on Turkey for its acquisition of the Russian S-400 anti-air missile system.

The Trump administration has maintained that the S-400 could expose the advanced fighter to possible Russian subterfuge and is incompatible with NATO systems. Turkey, however, counters that the S-400 would not be integrated into NATO systems and would not pose a threat to the alliance.

Pompeo called on Ankara to reconsider its decision, saying, "We're all working, everyone's working together to do our best." "We've made clear to the Turks that the activation of the S-400 is unacceptable," he added.

On Twitter, Sen. Lindsey Graham said the U.S. and Turkey "must find a way to avoid the damage to the relationship that comes from Turkey activating" the S-400 missile system. "When it comes to Turkey, we are looking for a Win-Win, not a Lose-Lose," Graham wrote. The senator also wrote, "It is my hope that we can have a stronger relationship with our allies in Turkey by discussing and negotiating a free trade agreement," said Graham, taking a more conciliatory tone than in his recent rhetoric.

Since the outbreak of the issue, Turkish authorities have been explaining the reason for its choice of a Russian arms deal to their American counterparts. When Ankara asked to buy the American version of the S-400, Congress and the then-U.S. administration under Barack Obama refused to sell Ankara Patriots. This explanation has also been echoed by Trump, who has repeatedly pinned the blame for Ankara's purchase of the Russian defense system on his predecessor Obama. Moreover, he has so far not stated that he will impose sanctions on Turkey.

Trump is currently carrying out a policy of balancing Turkey and Congress, which is calling for sanctions on Ankara over the purchase of the Russian-made defense system. He appears to be playing "good cop" for Ankara when it comes to dealing with Congress about the current U.S. policy toward Turkey.

However, the U.S. president still decided to remove Turkey from the F-35 stealth fighter program, a statement released by the White House said last week. Therefore, Trump's decision on sanctions is a source of curiosity.

Citing two Republican resources, CNN reported on Wednesday that Trump made it clear to the senators that "he does not want to sanction Turkey over its purchase of a Russian missile system."

"Trump has made clear publicly that he is reluctant to sanction Turkey over the purchase, blaming the Obama administration for Turkey's purchase of the Russian missile system," the CNN report said.

Trump may exempt relevant persons and institutions from sanctions or may delay the sanctions for a period of up to 180 days or remove some of them. But whichever option he chooses, the U.S. president has to convince Congress and offer evidence substantiating his decision. In this case, Trump is likely to choose the lightest options from the set of 12 sanctions and put off the process for six months. According to the law, the president can extend the delay period for a second term of 180 days 15 days prior to the expiration date of the first round.