US to develop new missiles after INF treaty exit 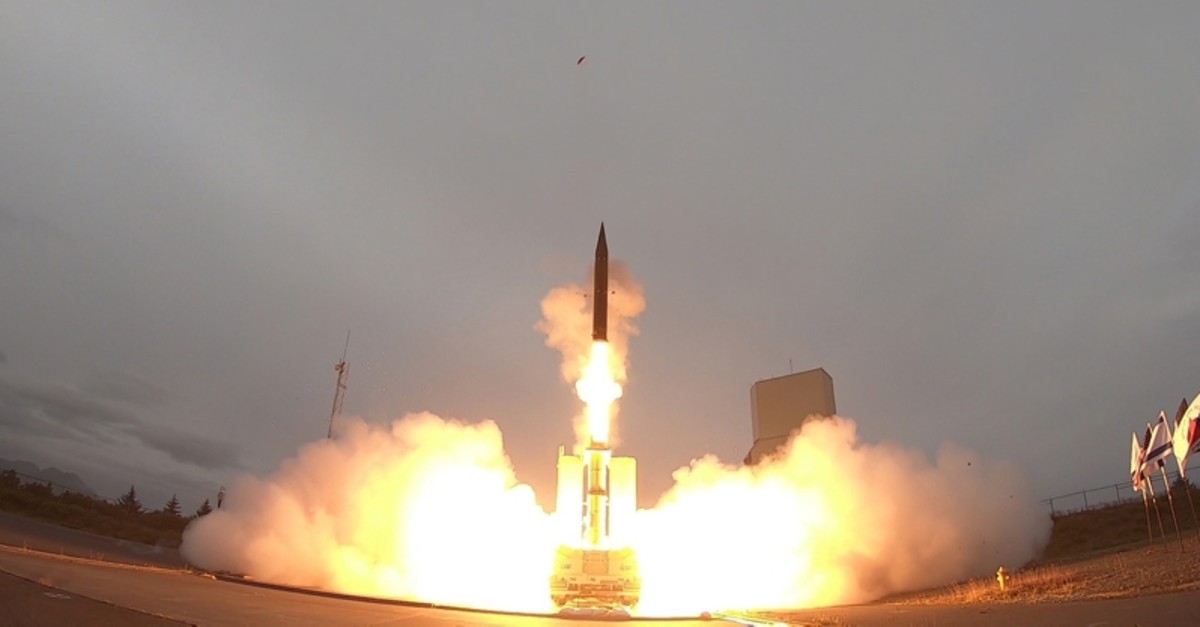 A handout picture released by the Israeli Ministry of Defense on July 28, 2019 shows the launch of the Arrow-3 hypersonic anti-ballistic missile at an undisclosed location in Alaska. (AFP Photo)
by Compiled from Wire Services Aug 02, 2019 10:29 pm

The United States is to accelerate its development of new cruise and ballistic missile systems following its withdrawal from a nuclear treaty with Russia, the Pentagon said on Friday.

As the United States had "scrupulously complied" with its obligations to the 1987 treaty until its formal withdrawal, "these programs are in the early stages," Esper said in a statement.

"Now that we have withdrawn, the Department of Defense will fully pursue the development of these ground-launched conventional missiles as a prudent response to Russia's actions.

"The Department of Defense will work closely with our allies as we move forward in implementing the National Defense Strategy, protecting our national defense and building partner capacity," he added.

Russia described the U.S. withdrawal as "a serious mistake."

It's defense ministry claimed that the main reason for the U.S. exit was the desire to get rid of the limits set by the treaty.

In announcing the U.S. pull out, Secretary of State Mike Pompeo said Russia "is solely responsible for the treaty's demise," adding that Moscow had "a final opportunity to correct its noncompliance" over the past six months.

Russia's development and fielding of a "treaty-violating missile system represents a direct threat to the United States and our allies and partners" and Russia's noncompliance under the treaty "jeopardizes U.S. supreme interests," Pompeo said.

The INF treaty had been widely seen as a cornerstone of European security in the post-Cold War era after the U.S. and Russia signed it in 1987. It prohibited both countries from possessing and testing ground launch missiles with a range between 300-3,100 miles.

Trump announced in October that the U.S. would exit from the pact, accusing Moscow of violating it.

The U.S. withdrawal began in February, starting a six-month deadline for the parties to return to the agreement.

The Obama administration in 2014 first publicly accused Moscow of violating the INF by testing a treaty-busting cruise missile, and the Trump administration pressed the accusation. Russia denies it has cheated, and counters with a contention that America's armed drones and missile defense system in Europe are violations.

U.S. military officials have said 95% of China's ballistic and cruise missiles would have violated the treaty.

"Since the strategic environment has changed rapidly since the end of the Cold War, we need to find ways to use arms control to address the rise of China's nuclear arsenal, the increase of Russia's non-strategic weapons stockpiles, and the emergence of new technologies like hypersonic weapons," said Texas Rep. Michael McCaul, the top Republican on the House Foreign Affairs Committee.

Chinese U.N. Ambassador Zhang Jun on Friday challenged what he said were efforts to make his country "an excuse" for the demise of the treaty: "You know, the United States is saying China should be a party in this disarmament agreement, but I think everybody knows that China is not at the same level with the United States and the Russian Federation."

The point of arms control is to limit or stop a competition in weapons that, if left unconstrained, could endanger not just the big powers but much of the rest of the world. Nuclear weapons are the clearest example of this, but advances in technology, the rise of China and the spread of nuclear capabilities to smaller countries like North Korea have complicated the problem.

That is one reason many in the Trump administration argue that extending the New START agreement with Russia, which is set to expire in February 2021, might not make sense. It is the only remaining treaty constraining the U.S. and Russian nuclear arsenals.

New START imposes limits on the number of U.S. and Russian long-range nuclear warheads and launchers. The deal was made in 2010, but the limits didn't take effect until 2018.

Trump has called New START "just another bad deal" made by the Obama administration, and Trump's national security adviser, John Bolton, said in June it is unlikely the administration will agree to the five-year extension to New START that the treaty allows and which can be done without legislative action in either capital.

David Wright, co-director of the Global Security Program at the Union of Concerned Scientists, said if Trump doesn't extend or replace New START it will be first time since 1972 that the U.S. and Russia will be "operating without any mutual constraints on their nuclear forces."

Gen. Joseph Dunford, chairman of the Joint Chiefs of Staff, has publicly expressed doubt about arms agreements with Russia in light of what he calls Russian violations of the INF treaty.

Dunford's view is at odds with that of many private arms control advocates, including Thomas Countryman, a former senior State Department official and now chairman of the Arms Control Association.

In congressional testimony last month, Countryman, who retired from diplomatic service in 2017, said it would be "national security malpractice" to allow New START to expire in 2021. He said the Trump administration is engaged in a "dangerous fantasy" by thinking Russia needs the New START treaty more than the United States does.