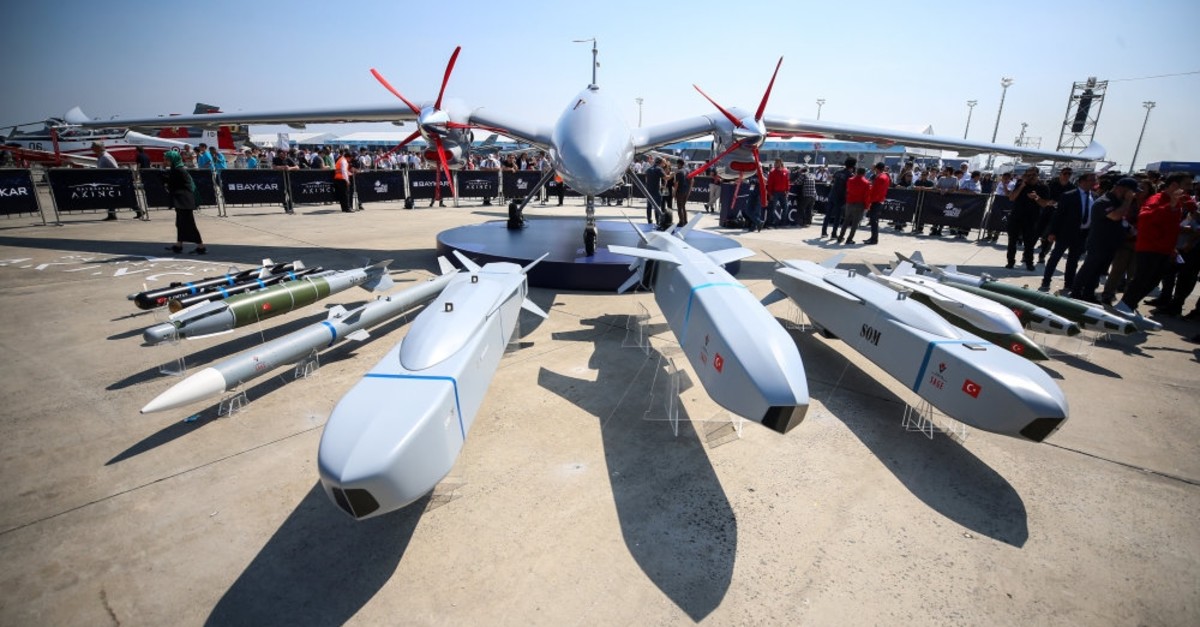 Large crowds continued to arrive Wednesday in the now-closed Atatürk Airport to examine Turkish defense companies' cutting-edge products exhibited on the sidelines of Teknofest Istanbul, Turkey's largest aerospace and technology event and the second-biggest aviation event in the world. Industry representatives met with domestic and international visitors, especially students of all ages, during the ongoing event, which will run through Sunday.

The event is jointly organized by the Turkish Technology Team Foundation (T3) and the Industry and Technology Ministry. Having become one of the leading aerospace events in the world by hosting more than 550,000 visitors in its inaugural year, the event is expected to attract more than 1 million visitors this time.

The festival boasts a host of activities such as aviation shows, seminars, workshops, drone championship, contests and concerts.

One workshop, in particular, proved to be a hit among TEKNOFEST's attendees. The "Designing My Rocket" workshop, held by the Defense Research and Development Institute (SAGE) of the Turkish Scientific and Technological Research Council (TUBITAK) — a national agency playing a leading role in the creation of a science and technology culture in Turkey — had initially been planned to be held in eight separate sessions in the first two days of the festival, but due to high demand 12 sessions were organized.

The drone – developed for exploration, surveillance and intelligence purposes – is capable of performing tasks in both open and closed spaces. Thanks to its size, the drone is silent and can barely be seen, its creators noted.

The device can stay in the air for at least 25 minutes and broadcast clear live footage from a distance of 1.5 kilometers. ASELSAN claims the drone, which took around a year to develop, has superior performance compared to its peers in terms of size and weight. The company said it plans to deliver the drones to the Turkish Armed Forces (TSK) next year.

Selçuk Bayraktar, the chairman of the T3 Foundation and the chief technology officer of the leading unmanned aerial platform (UAV) developer Baykar Makina said yesterday that they would be cooperating with Ukraine on turbo engines.

"The engines we will use in the unmanned aerial vehicle Akıncı are a matter of mutual production, and production in Turkey. You can see [Turkey and Ukraine] as two different countries with complementary abilities. Therefore, this cooperation will have very positive results for both countries," he told Anadolu Agency's (AA) Finance Desk in an interview on the sidelines of the festival.

Last month, Baykar Makina established a joint venture with Ukrainian arms trade company Ukrspetsexport, a subsidiary of Ukroboronprom. The main mission of the joint venture is to combine the defense capabilities of both countries and ensure the mass production of new modern defense products for their respective armies.

Dubbed "the flying fish," the Akıncı drone is an important step for Baykar to upgrade its UAV technology.

The drone has just recently completed its first engine test and is expected to officially start serving Turkish security forces in 2020. Bayraktar yesterday said they aim for Akıncı to carry out its first flight in October.

Baykar Makina's high-tech flying car prototype is also currently on show at the Teknofest. The country's first indigenous flying car, Cezeri, was produced in a lightning-fast nine months. Cezeri can currently carry one person but its next version will have room for more.

The vehicle is to be used for urban transportation in the future.

On the other hand, one of Turkey's largest commercial and defense vehicle producer BMC will develop at least seven different models of its newest armored pickup vehicle, which was showcased for the first time on the sidelines of the festival, one of the company's board members said yesterday.

BMC Board Member Taha Yasin Öztürk told Anadolu Agency that they initially started to design the vehicle two years ago to meet the operational needs of security personnel working under the Interior Ministry, adding that they are now developing different versions for different areas.

The vehicle weighs six tons, has 280 horsepower and can carry five people. A machine gun can also be mounted on the back of the vehicle. The pickup is mine sensitive, has a BR 7 ballistic protection level and is resistant to up to 3 kilograms of TNT.