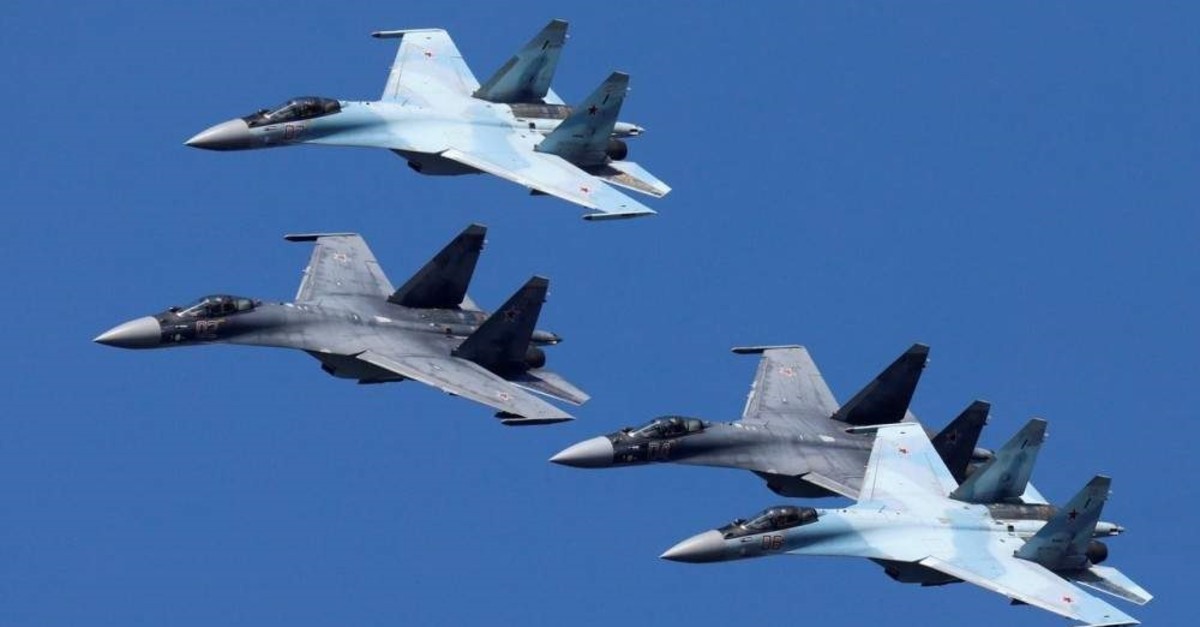 Sukhoi Su-35 jet fighters of the ,Sokoly Rossii, (Falcons of Russia) aerobatic team fly in formation during a rehearsal for the airshow in Krasnoyarsk, Russia August 1, 2019. (REUTERS Photo)
by Daily Sabah Oct 25, 2019 4:25 pm
Turkey is close to reaching a deal with Moscow over the purchase of Su-35 fighter jets as well as co-manufacturing some components of the Russian-made jets, Turkish sources said Friday.
Turkish and Russian officials are discussing the details of the sale of a total of 36 Su-35 fighter jets to Turkey, two months after President Recep Tayyip Erdoğan’s visit to the International Aviation and Space Salon (MAKS) aviation show outside of Moscow.
Sources added that officials are also discussing Turkey’s possible involvement in the production of some components of the fighter jets, including its precision weapons and ammunition.
At a visit to MAKS-2019 on Aug. 27, Erdoğan was shown the newest generation of Russian stealth aircraft, the Su-57 fighter jet, Su-35 fighter jets, the Ka-52 military helicopter and Mi-38 transport helicopter.
Soon after Erdoğan’s visit, Sergei Chemezov, the head of Russia’s state-owned manufacturer Rostec, said they would be willing to sell Russia's top air superiority warplane to Turkey if Ankara "expresses the desire."
Turkey has been at odds with the United States over its deal with Russia for S-400 missile systems. The U.S. suspended Turkey, a fellow NATO member, from its F-35 stealth fighter program in reaction to Ankara's purchase. Washington argued the S-400 would be incompatible with NATO systems and expose the F-35 to possible Russian subterfuge. Turkey, however, emphasized the S-400 would not be integrated into NATO systems and would not pose a threat to the alliance and refused to step back from the deal.
Last Update: Dec 20, 2019 1:14 am
RELATED TOPICS