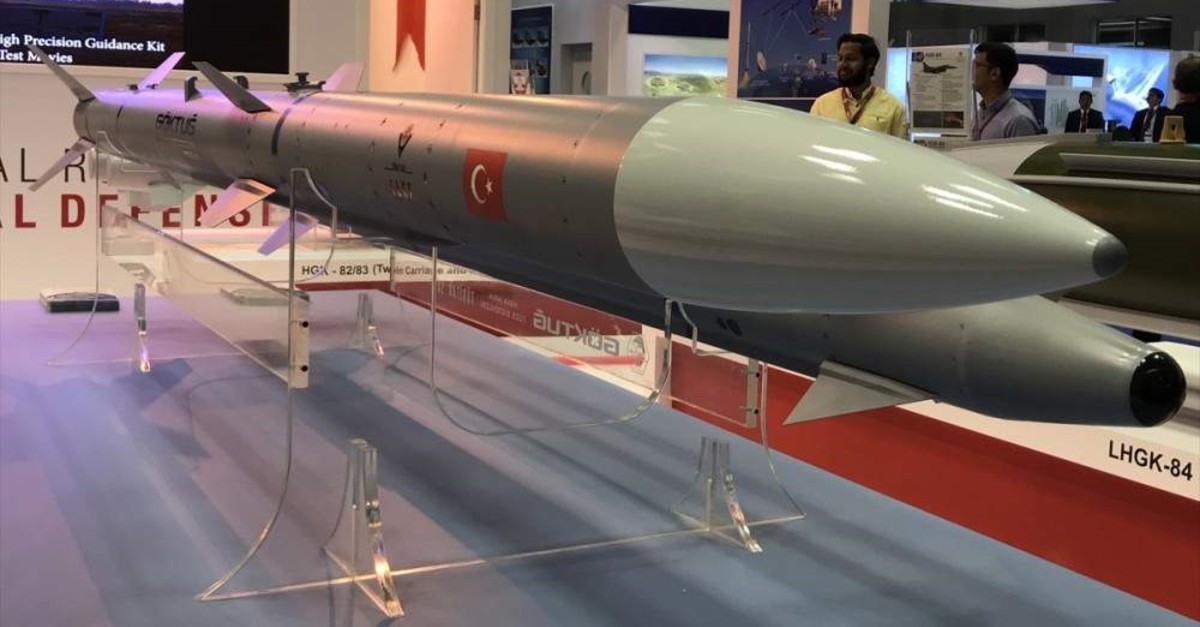 AA Photo
by Daily Sabah Nov 26, 2019 7:22 pm
One of Turkey’s first homegrown air-to-air missiles Bozdoğan (Merlin) has successfully completed its guided launch pad test firing, Turkey’s president announced Tuesday. The missile will enter the inventory of the Turkish Armed Forces (TSK) next year after it completes air-launch tests and be integrated with military aircraft.
Addressing the members of his ruling Justice and Development Party (AK Party), Erdoğan said Turkey is counting down the days for the mass production of the indigenous air-to-air missiles, which are normally purchased from abroad for millions of dollars.
“Our air-to-air missile Bozdoğan, which will be integrated into our fighter jets, successfully hit its targets in a guided test firing from the ground. Flying well above the speed of sound and having high maneuverability, this missile will undergo test firing from an aircraft next year,” Erdoğan said.
Bozdoğan and Gökdoğan are two air-to-air missile systems that have come from the Göktüğ project being run by the Scientific and Technological Research Council of Turkey (TÜBİTAK) Defense Industries Research and Development Institute (SAGE).
SAGE’s work on air-to-air missiles began in 2013. It developed Gökdoğan as a short range, high maneuverability, infra-red seeker, and Bozdoğan as a long-range, active radar seeker missile.
Bozdoğan will enter the inventory of the TSK next year after it completes tests, a statement by the Industry and Technology Ministry said Tuesday.
“Our air-to-air missile, which is being produced by only nine countries in the world, will be integrated into our national combat aircraft and F-16s. Thus, in addition to our air-ground weapons used in our warplanes, our air-to-air missiles will also be local and national,” the president added.
Following their introduction at the International Defense Industry Fair (IDEF) in May 2017, both missiles underwent ballistic launches from the ground. These tests measured the rockets' engine performance, without the guidance and the ability to destroy targets. The tests were successfully completed in the Black Sea province of Sinop.
The missiles are equipped with high thrust-low smoke solid fuel technology, full electronic rocket engine safe start and ignition system with high reliability and safety level, and a continuous fuse for high safety and reliability.
Last Update: Dec 20, 2019 1:57 am
RELATED TOPICS