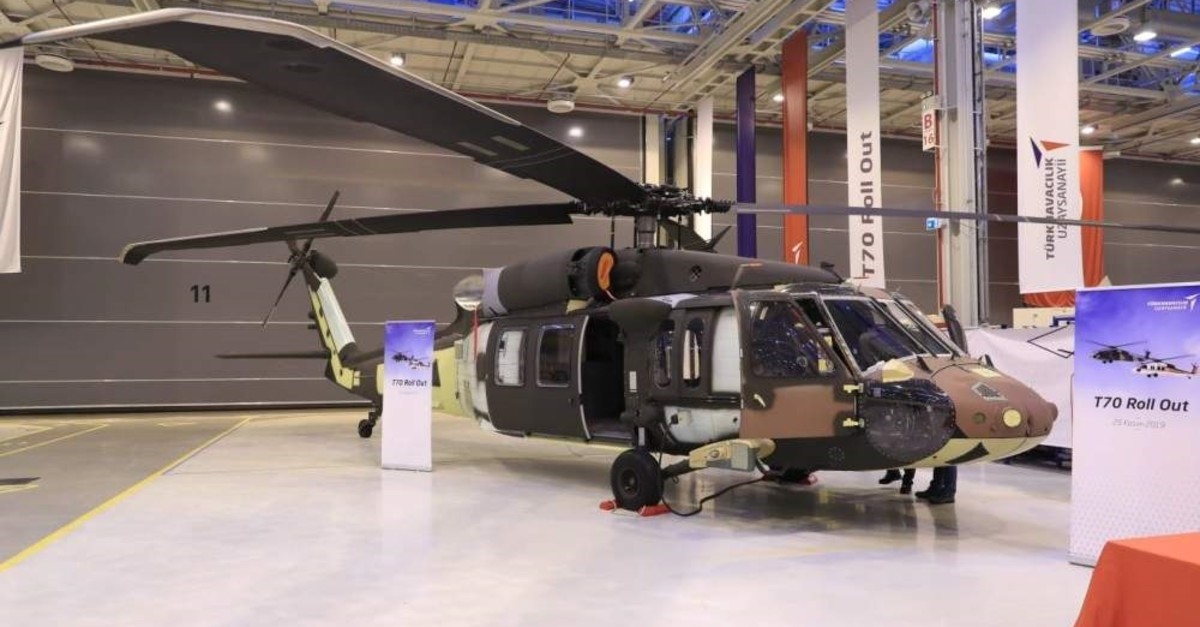 Photo: @IsmailDemirSSB
by Daily Sabah Nov 27, 2019 4:27 pm
The first of the multi-role Turkish-built Black Hawk type helicopter was rolled out of its hangar, İsmail Demir, head of Turkey's top defense body, announced late Tuesday.
“The first of the 109 T-70 helicopters we are developing within the scope of the ‘Utility Helicopter Program [TUHP]’ has been rolled out of the hangar,” Demir said over his social media account.
Within the scope of TUHP, multi-role T-70 helicopters are being customized based on the S-70i Black Hawk helicopter of Sikorsky Aircraft, a Lockheed Martin Company.
In 2016, Turkish Aerospace Industries (TAI) signed a $3.5 billion agreement with Sikorsky Aircraft. As part of the deal, 109 T-70 type Black Hawk helicopters will be produced and delivered to the Turkish Air Forces, Turkish Armed Forces (TSK), General Commandership of the Gendarmerie, Special Forces Command, the Security General Directorate and the General Directorate of Forestry within the next 10 years beginning from the date of the deal. TAI will customize T-70 helicopter in two configurations, for utility and firefighting.
Jason Lambert, Sikorsky TUHP program director, previously told Defence Turkey, an English language magazine, that for every T-70 helicopter that TAI assembles for the Turkish end users, TAI will also assemble an S-70i helicopter that Sikorsky will purchase from TAI for Sikorsky to sell to the international market
He had also noted that Sikorsky and TAI will partner together to identify export markets for these helicopters.
Lambert underscored that even though the initial number of helicopters to be exported is 109 units, this number could reach as high as 300 units depending on the T-70 options exercised by Turkey’s Defense Industries Presidency (SSB).
TAI is leading the program as a prime contractor of this program with other subcontractor companies; Sikorsky Aircraft, Aselsan, Turkish Engine Industries (TEI) and Alp Aviation.
TAI, is responsible for final assembly operations, customization and flight tests for each T-70 aircraft. Additionally, TAI also will manufacture the helicopter fuselage, empennage and composite rotor blades.
Sikorsky is the main subcontractor to TAI, delivering the technical data, technical training, technical assistance, aftermarket support, and helicopter components in the form of kits to enable TAI to build the T-70 helicopter based on the S-70i Black Hawk platform.
TEI is responsible for engines built under a license of General Electric (GE). The T-70 will be powered by GE Aviation T700 engines. The first domestically produced T700-TEI-701D engine was delivered to TAI in May this year.
Aselsan develops and integrates avionics and co-develops with Sikorsky Aircraft an enhanced digital cockpit known as the Integrated Modular Avionics System (IMAS). This enhanced digital cockpit will provide Turkish pilots with powerful smart displays, point-and-click functionality to speed input of pilot commands, and ergonomic enhancements to the Pilot Vehicle Interface that will reduce pilot workload.
Alp Aviation is responsible for the production and assembly of landing gears, gearbox and dynamic components.