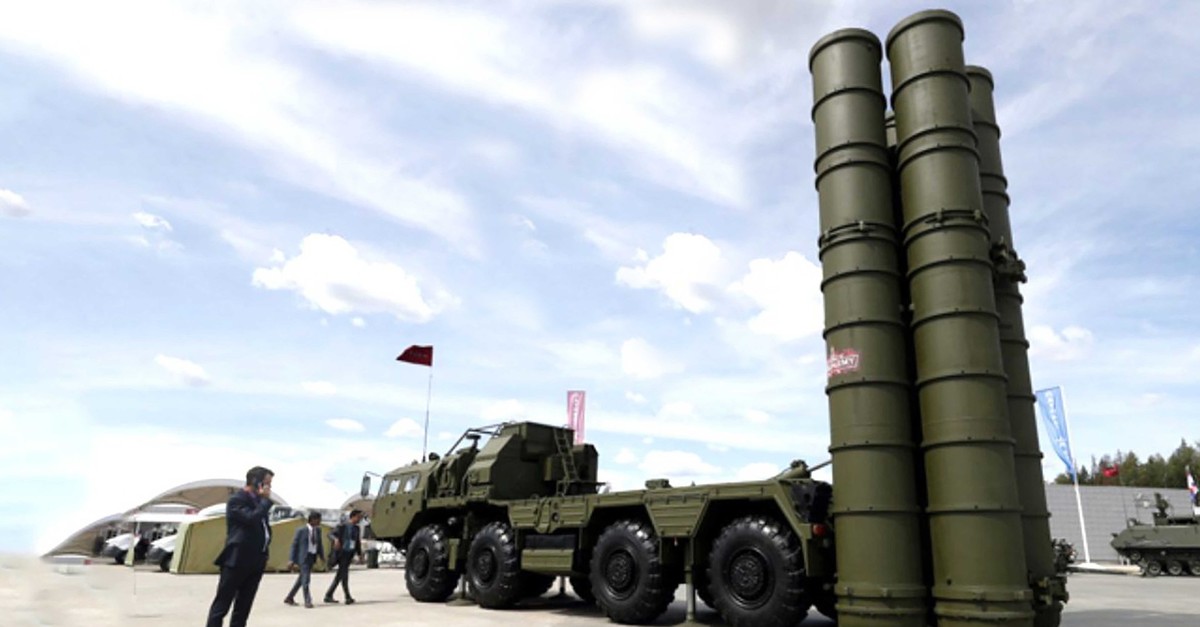 Turkey needs the S-400 air missile defense system and will continue to hold talks with the U.S., Foreign Minister Mevlüt Çavuşoğlu said yesterday, adding that it will not, however, accept any imposed measures or conditions.
“You don’t buy a product to keep it in a box. We need it,” Çavuşoğlu said in a joint conference with his Somali counterpart Ahmed Issa Awad in the capital Ankara.
"The S-400 battery alone is not enough, Turkey needs new and additional air defense systems," he added.
The foreign minister noted that Turkey needed to procure the missile defense system since the country does not produce its own, having thus been forced to purchase it from Russia in light of the U.S.’ refusal to sell its Patriot missile system.
Sensing that the country’s protracted efforts to purchase Patriots from the U.S. were bleak, Turkey signed a $2.5 billion deal with Russia in 2017 to acquire the S-400 anti-missile shield. Russia delivered two batteries of the S-400 system to Turkey between July and September this year. Security sources earlier suggested that the Russian systems will be deployed in Ankara and will be fully operational by April 2020.
The purchase has been a sticking point between Turkey and the U.S. for some time, as Washington has argued that the S-400 system would be incompatible with NATO systems and would expose its advanced fifth-generation F-35 jet to possible Russian subterfuge.
Turkey, however, emphasized that the S-400 would not be integrated into NATO systems and would pose no threat to the alliance, rejecting calls to back out of the deal. Turkey even proposed the setting up of a commission to clarify any technical issues, but the U.S. has failed to respond.
“We proposed the U.S. establish a working group led by NATO, but the U.S. rejected our offer,” Çavuşoğlu said.
He further reiterated President Recep Tayyip Erdoğan's earlier remarks that Turkey can purchase Patriot missiles if the U.S. guarantees it.
Çavuşoğlu’s remarks come after Turkish media on Monday reported that F-16 warplanes would fly over the country’s capital to test the S-400 system, but officials have yet to confirm that such tests took place.
However, an unnamed Turkish defense official was cited as confirming the tests while speaking to Bloomberg News.
“It is concerning,” U.S. Secretary of State Mike Pompeo said Tuesday when asked about the reports over Turkey’s tests of the defense system, but added that talks between Washington and Ankara to resolve the issue were still underway.
Pompeo said the United States has made it clear to Turkey that Washington wants to see Ankara move away from full operation of the S-400 air defense system.
At their meeting at the White House earlier this month, Erdoğan and his American counterpart Donald Trump agreed to ask their respective ministers and national security advisers to “immediately work on resolving the S-400 issue.” On Monday, Erdoğan told reporters that Turkish and U.S. officials would make efforts to resolve the dispute between the NATO allies over the defense system until April.
Saying that S-400 issue was mentioned at President Erdoğan's visit to Washington, Çavuşoğlu stressed that Turkey and the U.S. dissent and this is one of the issues that negatively affect Turkey-U.S. relations.
The acquisition of the Russian system prompted the U.S. to remove Turkey from the F-35 fifth-generation joint strike fighter program, in which Ankara was a major buyer and manufacturer, in July. Washington warned it would impose sanctions beyond removing Turkey from the F-35 program.
"We are partners in this project, we have made very serious investments," said Çavuşoğlu.
He said Turkey has so far invested some $1.4 billion in the F-35 program and has made a production worth a total of $2.2 billion.
"In a worst-case scenario, if we cannot buy the F-35 we will have to look for alternatives," he said.
Erdoğan recently said that he told his U.S. counterpart that Ankara would seek alternatives if the U.S. did not adopt a more compromising stance regarding the F-35s.