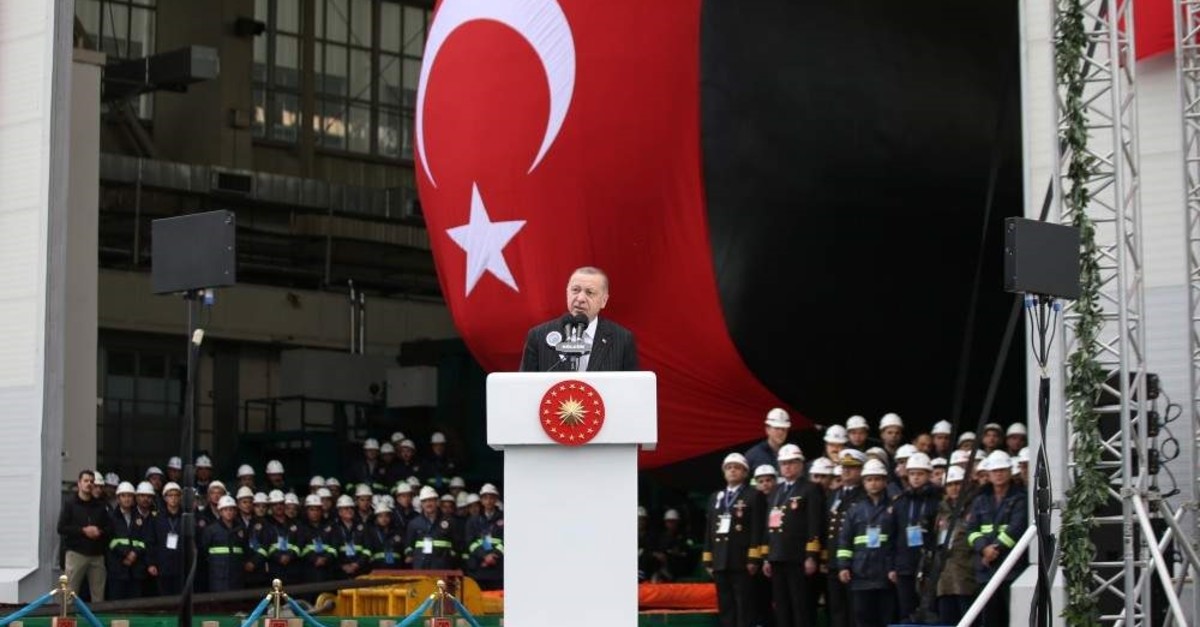 Expanding its locally made arsenal, Turkey continues its works on a fleet of six new submarines that will boost Turkish naval strength. The country plans to launch one submarine every year between 2022 and 2027

Turkey on Sunday achieved another milestone in its New Type Submarine Project, which looks to boost the capabilities of the Turkish navy in the Aegean and Mediterranean seas.

In a ceremony at the Gölcük Shipyard in northwestern Turkey, the Pirireis, the first submarine developed as part of the project, hit the water in line with the next phase of production. The ceremony also featured the ceremonial welding of the first sheet of metal on the fifth ship, the Seydialireis.

In a speech to mark the occasion, President Recep Tayyip Erdoğan said a total of six new submarines, one each year, would join the Turkish Naval Forces between 2022 and 2027.

The country launched construction of the first submarine, the Pirireis, four years ago, Erdoğan said, emphasizing that the submarine would be put into service in 2022.

Besides the Pirireis, the president recalled that the country had earlier overseen the inaugural first welding on another three submarines, the Hizirreis, the Muratreis and the Aydınreis and initiated their construction processes.

Turkey is constructing a fleet of six new Type-214 air-independent propulsion submarines as part of a contract signed with German ThyssenKrupp Marine Systems in 2009. Construction on the first boat in the class, the TCG Pirireis started in 2015.

Erdoğan said the construction of the latest submarine in the class, the Selmanreis, would be initiated by the end of next year.

He said he hoped that the submarines would be of use to the country, the nation, the army and the sailors. He emphasized that each of the submarines was named after "truly monumental personalities."

While the Pirireis has now been pulled to the water, the equipment of the second submarine Hizirreis, as well as the hull manufacturing of the third and fourth submarines, continues. The project is being carried out by the Defense Industry Presidency (SSB).

Submarines will have the ability to perform long-term operations in confidentiality, high-speed advanced torpedoes, and guided missile that can be thrown to surface targets (including land).

The submarines are the first in the Turkish Navy to use a fuel cell technology known as Type-214, as well as an air-independent propulsion system. Equipped with weapons against underwater, surface, and land targets, the submarines are capable of firing many types of torpedoes and missiles as well as laying mines.

Turkish defense contractors are taking part in the delivery of a majority of submarine systems. The submarines use systems developed by ASELSAN, HAVELSAN, MilSOFT, Defense Technologies Engineering and Trade Inc. (STM), Koç Information and Defense, Scientific and Technological Research Council of Turkey (TÜBİTAK), and AYESAŞ, while local manufacturers such as Gürdesan, Sirena Marine, Arıtaş, İ-Marine are also contributing to the construction process.

The gains achieved thus far, in terms of maximizing domestic industry participation, will be a strong reference for domestic and national submarines intended to be built under the National Submarine (MİLDEN) project.

Works on the Submarine Information Distribution System, dubbed "The Heart of the New Type Submarine," started in 2011 and was developed by HAVELSAN, which used real-time embedded software technology for the system. Meanwhile, seamless integration was achieved with 105 different units within the submarine.

The first system was completed in eight years with a number of additional features. In 2019, the ability to record data for at least 50 days was added. Some 400,000 lines of code were written for the system, as part of a project benefiting from the work of 111 engineers, technicians, and experts contributed to the project. The trademark registration of the Submarine Information Distribution System was completed in 2014, followed by a patent application, which was completed in 2015.