Turkey says no policy change unless Egypt respects national will 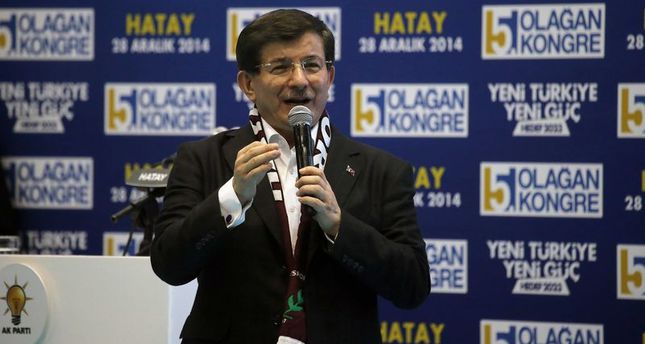 Prime Minister Ahmet Davutoğlu said on Sunday the sour relations between Turkey and Egypt could be brought to a better level if the Egyptian regime takes necessary steps to be a country of law and pay attention to the national will of its own people.

"Our Egypt policy is based on principles. We have no issues with Egypt or Egyptians. Our problem is with the administration that came into power when a military coup ousted an elected president and killed 3,000 to 4,000 [people] in demonstrations," he said.

Commenting on Turkey's stance, Egyptian Foreign Minister Sameh Shoukry said, Egypt would always be ready to positively interact with Turkey as soon as Ankara refrained from interfering in Egypt's affairs.

The Egyptian foreign minister said his country had not adopted any negative attitude toward Turkey. "We should not waste our time trying to reply to offences already decided at the international level," he added.

Deputy Prime Minister Bülent Arınç also commented on Turkish relations with Egypt saying that Turkey wants "zero problems" with its neighboring countries. "If there is deterioration in relations between the two countries, we are not the destructive party."

Relations between Turkey and Egypt have been tense since July 2013 when the country's first democratically elected president, Mohammed Morsi, was ousted by current President Abdel-Fattah al-Sissi, a former army general.

"We want peace to dominate in the region and countries to have good relations. We also want to improve our relations with all countries including Egypt. However, the Egyptian government should change its current policy over human rights violations. Unfair accusations, illegal trials and political executions in the country should stop," he said.

Turkey has put forth conditions indicating that normalization of relations with Egypt is unlikely in the immediate future, Foreign Ministry spokesman Tanju Bilgiç recently said. "If Egypt returns to full democracy, if the Egyptian people's will is really represented in political and social life, then our relations with Egypt may normalize," he added.


Doha had supported the Muslim Brotherhood, in power prior to the 2013 coup that led to Sissi as president of Egypt.

Bilgiç highlighted that Turkey had always supported Egyptians but that the 2013 coup had been "cruel and used disproportionate force against civilians."

Bilgiç also said Qatari officials had made no "effort to mediate for Egypt and Turkey" during Thani's visit last week to Ankara.