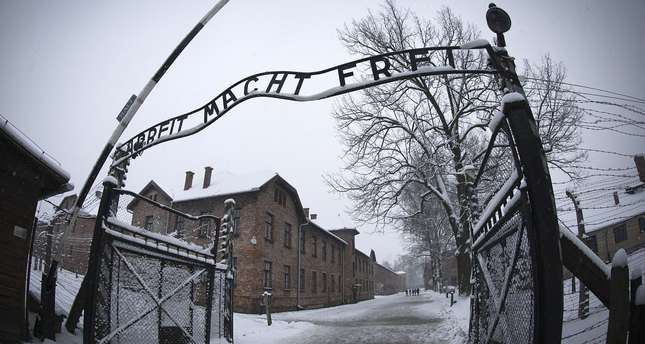 by Nurbanu Kızıl Jan 27, 2015 12:00 am
Turkey's Ministry of Foreign Affairs has issued a press release regarding the remembrance of January 27 as the "International Holocaust Remembrance Day."

"January 27 marks the day on which the Auschwitz-Birkenau Death Camps, established in the territory of Poland by the Nazi regime and where the highest numbers of people were massacred, were liberated" the statement said, adding that it is a meaningful day to commemorate the victims and survivors of the Nazi brutality in Europe.

The statement noted that this year marked the 70th anniversary of the liberation of the camps and that the Turkish foreign ministry respectfully remembers the millions of innocent people who lost their lives, primarily the Jews, while conveying their condolences to the relatives of the victims.

The foreign ministry expressed their hope that awareness is developed about the Holocaust, -recognized as "one of the darkest times of human history-" and wished that states throughout the world will work together to prevent such tragedy from taking place again.
It was noted that anti-Semitism, which formed the basis for the brutal Nazi ideology, still survives today and Turkey believes it is necessary to fight against this inhumane ideology and continues to carry out activities to raise awareness about the Holocaust.

In the 1930's, Turkey opened its doors to hundreds of Jews fleeing persecution in Germany and Austria. They also tried to help innocent people during World War II.

"Turkish diplomats serving in some European countries at that time managed to save a considerable number of people from being taken to the concentration and death camps by displaying great examples of courage," the press statement noted.

The statement underscored that Turkey highlights the importance of international relations to be conducted on a more humanitarian basis and pays exclusive attention to humanitarian issues.

Turkey's Foreign Minister Mevlüt Çavuşoğlu was scheduled to represent Turkey in the commemoration ceremony to be held on Tuesday in the Auschwitz-Birkenau Death Camps. The delegation accompanying Foreign Minister Çavuşoğlu will include representatives of the Turkish Jewish Community as well.

The speaker of the Turkish Parliament Cemil Çiçek attended the Holocaust commemoration activities held by the Parliament of the Czech Republic in cooperation with the European Parliament in Prague on 26-27 January 2015 and delivered a speech to the international forum organized in this scope.