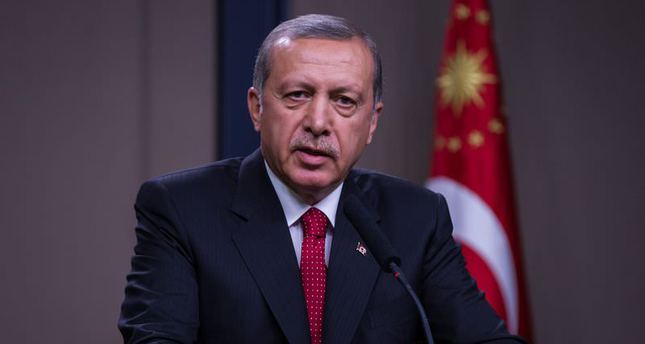 by Nurbanu Kızıl Jan 29, 2015 12:00 am
President Recep Tayyip Erdoğan will visit Latin America from Feb. 9 to Feb. 12, according to an official announcement made by presidential spokesman İbrahim Kalın on Wednesday.

The president will first head to Colombia on Feb. 9 and stay there until Feb. 10 when he will go to Cuba, and his last stop will be Mexico on Feb. 11 until Feb. 12.

"Trips to Latin America are significant for Turkey and its relations with that region," Kalın said, explaining that Erdoğan will try his best to visit all countries who are members of the G20 as a preliminary meeting before the summit that will take place in the Mediterranean province of Antalya in November.

A total of 300 businessmen will accompany the president with a focus on expanding commercial ties with Mexico due to its proximity to the U.S. market and growing economy.

In response to allegations about Erdoğan attending the groundbreaking ceremony of the first mosque to be built in Cuba, Kalın has said that this was not included in Erdoğan's schedule.

Erdoğan will continue to visit Latin America later in the year, according to Kalın. He is expected to visit Brazil, Argentina and Chile in March.

The discussion between the two countries over the mosque, which will be a copy of the famous Ortaköy Mosque in Istanbul, has continued for the past few months, with the Presidency of Religious Affairs (DİB) being the leading interlocutor with Cuban officials. There is said to be about 4,000 Muslims in Cuba.

Turkish media outlets claim that five acres of land in the Old Havan district of the Cuban city have been allocated for the mosque as DİB is working to construct the mosque.

Erdoğan's visit to Cuba is also significant since he will be the first president in modern Turkish history to make a visit there. Turkey has only paid visits to Cuba at the ministerial level before.

He will also pay official visits to other countries in the upcoming months including Iran, Saudi Arabia, some member states of the EU, Kazakhstan and Uzbekistan.

Turkey's efforts to develop stronger relations with Latin American countries can also be seen in a memorandum of understanding that was signed in 2014 by the Turkish Cooperation and Coordination Agency (TİKA) and the Mexican Agency for International Development (AMEXCID) to improve cooperation regarding international and regional aid initiatives.