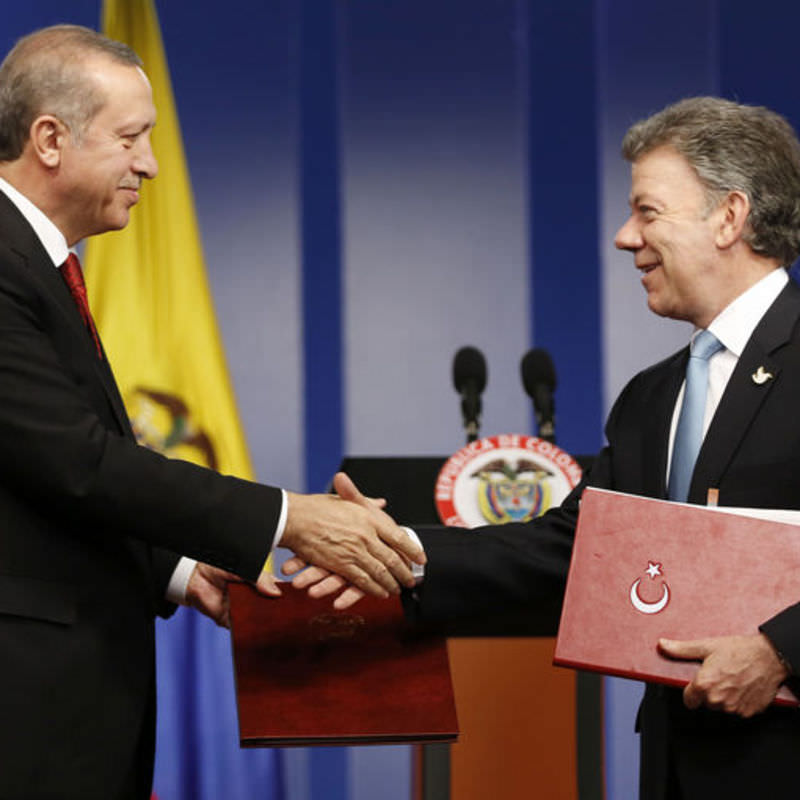 "We have signed cooperation agreements in various fields including in the agricultural, livestock and fishing industries," Calderon said, adding that Turkey has become Europe's leading nation in these fields.

The agreements include the Turkey-Colombia Cooperation Framework Agreement, a plan for cultural cooperation, a memorandum of agreement in the tourism sector and a memorandum of understanding in the agriculture field.

"Colombia has transformed into a dream come true," Erdoğan said. "Colombia instills hope and excitement in its zone."

Erdoğan said that only three Turkish construction companies are active in Colombia, which he said was insufficient. He also asked more Colombian companies to invest in Turkey.

The Turkish president also said that the Turkish Cooperation and Development Agency (TİKA) will establish a branch in Colombia soon.

"Our TİKA office will cooperate with Colombia in the fields of education, culture and all others," he added. "Turkey and Colombia have signed a letter of intent to promote the Spanish language."

Highlighting the importance of cooperation against terrorism, Erdoğan said that international solidarity was crucial.

The Turkish president added that Turkey had already paid a heavy price because of terrorism and was aware how terrorist activities can cause major damage to nations.

Calderon said that the countries' common struggle was terrorism.

"Turkey is currently the joint chair of the Global Counterterrorism Forum," said Calderon. "We are also part of the global forum and are sharing our experiences in the field."

The Global Counter Terrorism Forum is an informal, multilateral counterterrorism platform formed in 2011 and is currently co-chaired by Turkey's foreign minister and the U.S. secretary of state.

The two leaders also touched upon the issue of tourism.

"We are making serious investments in tourism," Erdoğan said. "We will continue to do so."

Erdoğan said that when he first became Turkey's prime minister 12 years ago, only 13 million tourists came to Turkey every year, bringing in $8 billion in revenues.

Calderon noted that Colombia and Turkey signed a tourism cooperation agreement in order to benefit from Turkey's experience in the sector.

Calderon said that Turkey is seen as an important touristic destination in the world and Colombia also has very high potential in the field.

Colombia's president said the communication link between the countries would be boosted with direct flights by Turkey's national carrier Turkish Airlines.

Erdoğan was welcomed in a military-style ceremony and said he was thankful to Colombia. Calderon said that Erdoğan's visit was important, as it is the first visit by a Turkish president and comes during Turkey's interim presidency of the G20 group.