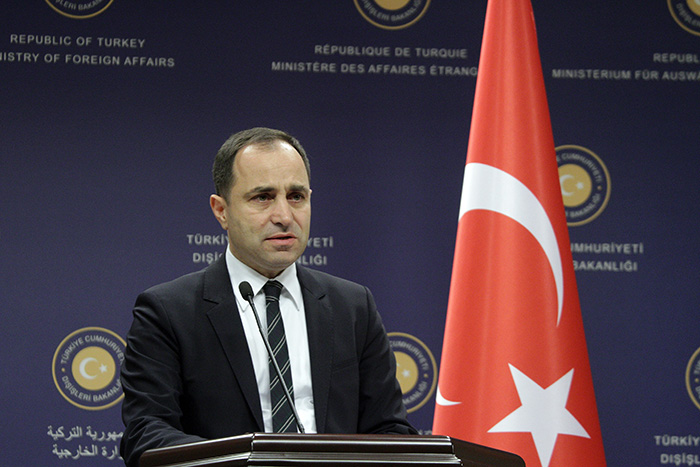 |Photo: AA
by Anadolu Agency Mar 14, 2015 12:00 am
The human rights report 'Annual Report on Human Rights and Democracy in the World in 2013', adopted by the European Parliament, lacks historical reality and legal basis, the Turkish foreign ministry said on Saturday.

The European Parliament adopted the report on Thursday. Article 77 of the report, which was called "ahead of the 100th anniversary of the Armenian Genocide, on all the member states to legally acknowledge it, and encourages the member states and the EU institutions to contribute further to its recognition," was harshly criticized by the foreign ministry spokesman Tanju Bilgiç.

"We find the statements remarkably problematic in every aspect and regret them," said Bilgiç in the statement.

Bilgiç added that the report interpreted the event with a one-sided approach, and disregarded Turkey's realistic and constructive initiatives relating to the matter. The report also raised "illogical and unlawful" demands, he said.

"These steps, which were taken by those who do not know this historical event, damage Turkey-EU relations and make it difficult for Turks and Armenians to build their future together," said Bilgic.

"We expect our European partners not to deepen the problem further, but rather to find constructive contributions to the solution and encourage the Armenian side towards dialogue and reconciliation," he added.

In January, Turkish President Recep Tayyip Erdoğan sent invitation letters to more than 100 leaders, including Armenian President Serzh Sargsyan, to participate in the commemoration of the Battle of Çanakkale on April 24.

Sargsyan reportedly denounced Erdoğan's invitation as a "short-sighted" attempt to overshadow the 100th anniversary of the 1915 events.

The famous battle coincides with the 1915 events that took place during World War I. A portion of the Armenian population living in the Ottoman Empire sided with the invading Russians and revolted against the empire. A decision by the Ottoman Empire to relocate Armenians in eastern Anatolia followed the revolts and there were some Armenian casualties during the relocation process.

Armenia terms the events as "genocide" and has demanded compensation, whereas Turkey officially refutes this description, saying that, although Armenians died during relocations, many Turks also lost their lives in attacks carried out by Armenian gangs in Anatolia.
Last Update: Mar 15, 2015 10:44 am
RELATED TOPICS