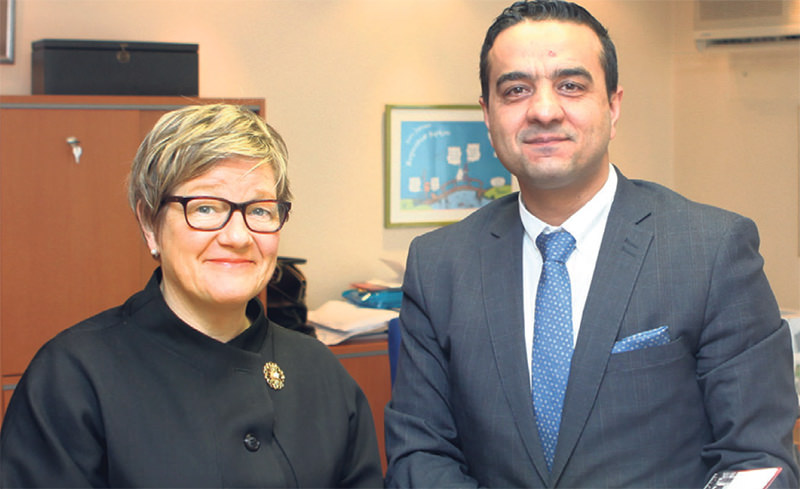 | Photo: Ugur Yildirim
by Ali Ünal Mar 16, 2015 12:00 am
Finland is the country that has played a significant role in Turkey's EU accession process. The city of Helsinki remains associated in the EU's collective memory by the granting of candidate status to Turkey in 1999, and since then Finland has been one of the vocal and strong supporters of Turkey's European Union membership. In addition, both countries enjoy strong relations that have historical roots. To further discuss Turkish-Finnish relations, Daily Sabah sat down with the Finnish ambassador to Turkey, Nina Vaskunlahti, and discussed various topics, including present and future Turkish-Finnish relations.

Last year, Turkey and Finland celebrated the 90th Anniversary of the establishment of a diplomatic friendship agreement. How do you evaluate the importance of the relationship between the two countries?

I am happy to express that relations between Turkey and Finland are excellent. In 2014, we celebrated the 90th Anniversary of friendship. As a matter of fact, in the following year, 2016, it will also be the anniversary of establishing diplomatic relations.

A number of high level visits take place every year: Ministers, parliamentarians and high ranking civil servants come to Turkey to meet their counterparts and exchange ideas. For instance, last year in addition to three ministerial visits, we hosted two visits from the Finnish parliament: Mr. Eero Heinäluoma, the speaker of the Finnish parliament – Eduskunta – visited Istanbul and Ankara in May with a sizeable delegation. The "Committee for the Future" of the Finnish Parliament also visited Ankara and even had time to visit Cappadocia. They were mesmerized by the landscape! Just recently, the Turkish Minister for European integration, Mr. Bozkir, was in Helsinki and had extensive talks with Foreign Minister Tuomioja and Minister for European Affairs Mrs. Lenita Toivakka. He was also the special guest of the Foreign Affairs Committee of the Finnish Parliament.

Despite a wide-range of European Union countries strong oppositions towards Turkey's EU bid, Finland has been displaying a very supportive stance since the beginning of the process. What are the motives behind such support?

We really believe that Turkey would be an asset for Europe from both an internal and external point of view. Turkey's membership in the EU would also set an example to the neighboring countries of Turkey. Turkey's accession would enrich the EU in terms of culture, economy and politics. Turkey is a great nation that has a lot to offer. EU Minister Volkan Bozkır when in Helsinki a few weeks ago said that Turkey aspires towards European values and standards. We firmly believe in European values and standards. At the same time, the accession criteria have to be fulfilled. I think Turkey's accession would contribute to the EU as wells as to Turkey.

I would like to move on to another issue. How did the events following the Russian annexation of Crimea affect Finland, which also borders Russia?

Russian annexation of Crimea is something we don't accept. Russia clearly has broken the principles of international law and the basic security principles of Europe. We believe in the Minsk Agreement. That's the only way to restore peace in Ukraine. Some people might say that annexation of Crimea is a fact of life. That might be a fact, but that doesn't mean that it is acceptable. It is not up to one country in Europe to start unilaterally moving the borders. Finland as a member country of the EU supports the sanctions against Russia. As our foreign minister recently said, "Sanctions are not a policy but an instrument." It is an instrument to dissuade Russia from what it is doing. Of course, it will take a while before the sanctions have any impact. But we think that any impact on Russia is reasonable, particularly when Russia is also suffering from the decrease of oil price and a weakening ruble.

In recent weeks former NATO Chief Rasmussen said a Russian attack on the Baltics is "highly probable." Do Finnish people have concern or fear on this issue?

I don't think there is fear in Finland. It is true that the international situation is marked by instability and tensions between the countries. There is no way of denying that. There is instability in the whole neighborhood. Finland shares a 1,300 kilometer border with Russia, and the border works well There is good cooperation between the frontier guard services. But Finland has always paid careful attention to its own defense. We still have a conscription army, which is exceedingly rare in today's Europe. The purpose of our defense policy is to maintain our military capabilities and credible defense.

While the discussion of an emergence of a dipole world order is increasing, would Finland reconsider becoming a NATO member?

It is an issue discussed in Finland. Recently, there was an opinion poll concerning NATO membership: Around 28 percent of the Finnish people support NATO membership, and interestingly, that has been the figure for many years. In that perspective nothing has seriously changed. At the same time, we have to remember that since 1994 Finland has a partnership with NATO. The mutually appreciated cooperation has been going on ever since, and the commitment for cooperation was renewed again at the NATO Summit in Wales last September. The cooperation is called Enhanced Opportunities Program (EOP), and there are four other EOP countries alongside Finland. The Enhanced Opportunities Program offers possibilities for joint exercises, training and participation in joint crisis management operations and also for political dialogue.

When you look at Finland, it is a small country with a population of 5.3 million. Up in the north, we are a democratic country, and we have an open society based on equality, rule of law and transparency. We have consciously built Finnish society ever since independence in 1917. We are also a country that has relied on its own forces and ingenuity. We have also won the respect of our neighbors. It looks like we have made the right choices in the course of time. Finland is also engaged in Nordic Defense Cooperation, NORDEFCO, established in 2009. Traditionally, cooperation in the defense area is strong between Finland and its close neighbor Sweden. In concrete terms, the two countries have joint crisis management operations, training and joint material purchases.

Finland has been a member of the European Union for 20 years. We joined the Union in 1995, at the same time as Sweden and Austria. Being a member of EU also characterizes our place internationally and in the broad sense of security. In the referendum whether to join the European Union or not – or in those days the European Community – I voted "yes" because for me the membership was to mark the rightful place of Finland in Europe with its European value base.

As Islamophobia is on the rise throughout Europe and Islam is seen as a threat, Finland public broadcasting is reading the Quran. What are the political motives behind this?

That is an interesting question. The timing of the program is quite amazing, as it had been decided two years ago to do a program about the Quran. Yle, the Finnish Public Broadcasting Company, wanted to make a series on Quran and Islamic culture, and it took all this time to do the necessary background work. The broadcasting of the program has now started. In the program, the Quran is read, and then the contents are discussed between Professor Jaakko Hämeen-Anttila (who has translated the Quran – Koraani – into Finnish) and Anas Hajjar, who is an imam and representative of the Islamic Society of Finland.

When I talked to Yle, they said some people in Finland see the Quran as "mythical," and thus, they wanted to show that there is nothing mythical in it through discussing it for the masses.

Fortunately, Islamophobia is not a big issue in Finland. Finnish people in general are broad-minded. We are a small nation with a 5.3 million population, and we believe that in order to survive, you have to be open to ideas, other cultures and other people. Of course in Finland, like in every other country, there are people who are afraid of change, afraid of something different, but these people are a minority.

Last month Finland and Turkey signed the JETCO deal to develop trade relations. What are some other fields the two countries can enhance relations on?

Minister of Foreign Trade Lenita Toivakka signed the JETCO agreement with Economy Minister Mr. Zeybekci in February when she visited Turkey. We hope with this agreement we can further develop trade and economic cooperation between Finland and Turkey. Yes, we have excellent political relations, we have good trade and economic relations, but there is room for further development. Our trade volume is about 1.1-1.2 billion euros for the last three years. We should find ways to increase the figures. JETCO will bring together business representatives and also give them the opportunity to discuss the issues directly with ministers and decision makers.

Within the JETCO framework, we can look for the solutions for technical barriers to trade and bring the right people together, and after that it's up to businesspeople to make the most of it. Turkey is an interesting market for Finnish companies. We think that there is a lot that Finnish companies can offer the Turkish market. For instance, what we call clean technologies; we have know-how in solar and wind power and are efficient in energy usage. Finland produces mining equipment; Turkey is a country of mines. We have expertise in IT. We are looking for opportunities on how to cooperate more in research, development and innovation. Finland puts roughly 4 percent of its GDP into R&D and development, Turkey somewhat less. So we think that we can join forces in that chain as well.

Turkey is a very competitive market. You can only succeed if you have something special to offer!

How is Turkey perceived among the Finnish citizens, considering that the number of Finnish tourists visiting Turkey has more than doubled in recent years?

Yes, it has doubled. I think last year something like 240,000 Finnish people visited Turkey. It is almost 20 percent of our population. Turkey is among the top 10 destinations for Finnish travellers. Why do they go to Turkey? Sunshine is guaranteed. Finland is a nice country; it has long summer days, but you can't be sure if there will be proper sunshine. Turkey has nice beaches, nice hotels, interesting historical sights, interesting cultural events, and Istanbul is unique of course. It is among one of the places you have to see before you die.

The price/quality ratio is very good. Turkey is close. Turkish Airlines now flies twice a day; during the peak season there are also flights to Antalya, İzmir and Alanya as well. Two thousand to 3,000 Finnish people live permanently in Turkey, especially in the Alanya region.