Erdoğan: Armenia will not gain anything from propaganda 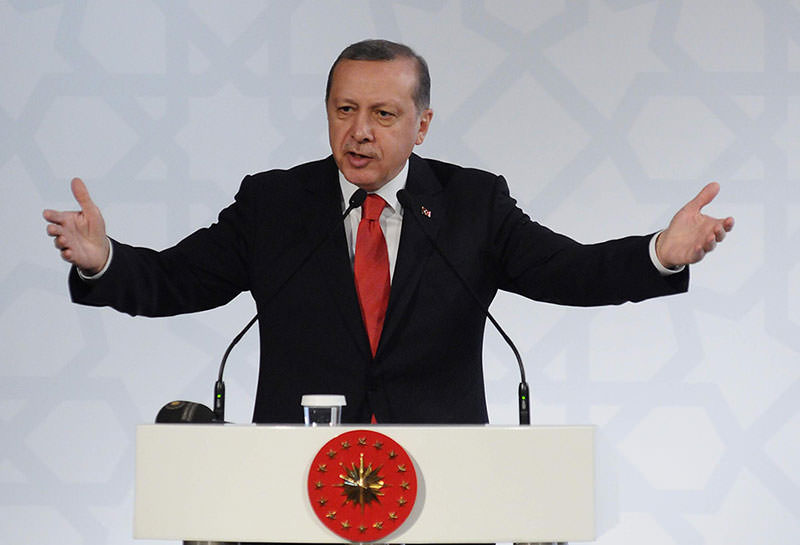 | Photo: DHA
by Daily Sabah with AA Mar 19, 2015 12:00 am
President Recep Tayyip Erdoğan has said Armenia will not gain anything from propaganda against Turkey. "The purpose of this campaign against Turkey is to treat our country as an enemy instead of keeping alive Armenians' sorrow," Erdoğan said on Thursday in Istanbul, as Armenians prepare to commemorate the 100th anniversary of the 1915 incidents on April 24.

Erdoğan also called on Armenians to study archives pertaining to the era in order to uncover what actually happened between the Ottoman government and its Armenian citizens. The president said Armenia had never answered Turkey's call to study the archives, adding: "You cannot gain anything from the propaganda against Turkey with bribing countries, immoral ways and lobbying."

He claimed that the purpose was not to find the truth, but to damage and attack Turkey, adding: "We do not have to account to anyone on this issue. If we pursue our nation's 100, 150 years of sorrow we can find more than Armenian allegations." Not just Armenians were affected by the war, but hundreds of Muslims, too," he added.

Turkish-Armenian relations have remained strained for decades due to Armenia's constant demand for Turkey to officially accept the Armenian claim of "genocide." Tensions peaked in 1993 when Turkey closed its border with Armenia in reaction to the war in Nagorno-Karabakh in support of its close ally Azerbaijan.

Nevertheless, last year, Erdoğan made attempts to thaw the tensions between the two countries by issuing a message ahead of the 99th anniversary of the 1915 incidents. In an unprecedented move, as prime minister, Erdoğan extended condolences to the grandchildren of Armenians who lost their lives in the 1915 events.

The debate on using the term "genocide" and the differing opinions between the present-day Turkish government and the Armenian diaspora, along with the current administration in Yerevan, still generates political tension between Turks and Armenians.

During World War I, the Ottoman Empire approved a deportation law for Armenians amid an uprising with the help of the invading Russian army. As a result, an unknown number of people died in civil strife and forced migrations. Turkey's official position against the allegations of genocide is that they acknowledge that the past experiences were a great tragedy and that both parties suffered heavy casualties, including hundreds of Muslim Turks. Turkey agrees that there were Armenian casualties during World War I, but that it is impossible to define these incidents as genocide.