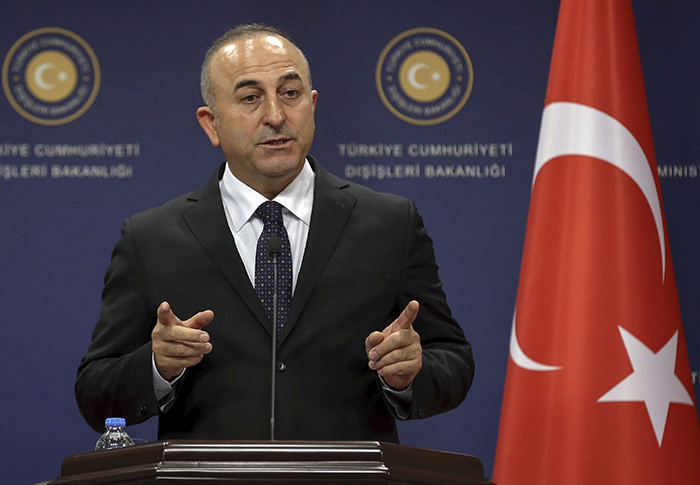 |Photo: AA
by Anadolu Agency Mar 27, 2015 12:00 am
The Turkish foreign minister has ruled out military support for a Saudi Arabian-backed operation to halt Shiite Houthi rebels in Yemen.

Mevlüt Çavuşoğlu said the situation in Yemen had to be stopped immediately and that there was "no need for a sectarian war."
During a televised interview on Friday, Çavuşoğlu said: "We said we can give every kind of support, including intelligence, but not military support."

Çavuşoğlu also said Turkey will consult with Gulf countries about what kind of support it could offer.

In an interview with French network FRANCE 24 on Thursday, Erdoğan said that Ankara may consider providing "logistical support" to the mission.

"We support Saudi Arabia's intervention," Erdogan told FRANCE 24. "Turkey may consider providing logistical support based on the evolution of the situation," he added.

Saudi Arabia has been leading a coalition of Arab countries, all of them U.S. allies, to launch airstrikes against Houthi positions since late Wednesday.

Riyadh said the strikes were in response to calls by Yemeni President Abd Rabbuh Mansour Hadi for military intervention to "save the people from the Houthi militias."

Fractious Yemen has been in turmoil since last September, when the Shiite militants overran the capital Sanaa, from which they have sought to extend their influence to other parts of the country.

Media reports in Turkey on Thursday said that Turkish Airlines had suspended flights to Yemen.

Speaking about the belated train-and-equip program for Syrian fighters opposed to the regime of Bashar al-Assad, Çavuşoğlu said the U.S. and Turkey were deciding everything together.
When asked about why the program has not started yet, Cavusoglu answered: "Because of the geographical distance of the U.S. their preparations for the train-and-equip program came late."

On February 20, Çavuşoğlu said that around 2,000 Syrian fighters would take part in a train-and-equip program in Turkey to fight Daesh and the Assad regime, starting in early March. The program has yet to start.

Turkey expects no 'attitude change' from US on Armenia


When asked about any potential change in attitude from the U.S. on the 100th anniversary of the 1915 Armenian incidents in the Ottoman Empire, Çavuşoğlu answered: "We expect no attitude change from the U.S. Otherwise, our relations would be damaged immensely. But we know the U.S. government has the same sensibility."

"I have consistently stated my own view of what occurred in 1915, and my view has not changed," said Obama.

The debate on "genocide" and the differing opinions between the present-day Turkish government and the Armenian diaspora, along with the current administration in Yerevan, still generates political tension between Turks and Armenians.

During the First World War, the Ottoman Empire approved a deportation law for Armenians, amid their uprising with the help of the invading Russian army. As a result, an unknown number of people died in civil strife.

Turkey's official position on the "genocide" allegations is that it acknowledges that past experiences were a great tragedy and that both parties suffered heavy casualties, including hundreds of Muslim Turks.

Turkey agrees that there were Armenian casualties during World War I, but that it is impossible to define these incidents as "genocide."
Last Update: Mar 27, 2015 2:38 pm
RELATED TOPICS