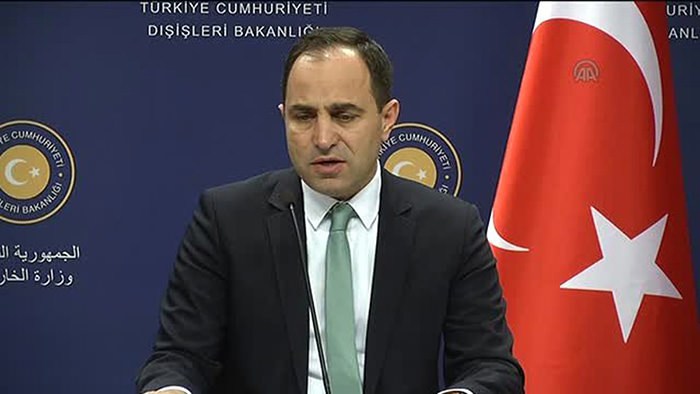 by Anadolu Agency Apr 01, 2015 12:00 am
Turkey has strongly rejected the remarks of Arab League Chief Nabil el-Araby of Egypt, who claimed that Turkey was one of the countries that "interferes" in the region.

Following the end of the Arab League summit in Sharm el-Sheikh, Egypt on Sunday, Araby was asked to name the foreign powers behind the chaotic environment in Arab countries. "I will answer this question indirectly," Araby said. "There is meddling by some neighbors; Israel on one side and Turkish and Iranian interference in several countries."

During his weekly address to the press, Foreign Ministry spokesman Tanju Bilgiç said the ministry had summoned Mohammed el-Fattah Naciri, the representative of the Mission of the Arab League in Turkey, on Monday. "We harshly expressed to Naciri that the statements of Araby can never be accepted," said Bilgiç.

Bilgiç added that Araby's statements did not reflect the ideas of all Arab people, but rather he spoke under the influence of his nationality. Relations between Egypt and Turkey have soured dramatically since the ouster of Mohammed Morsi, Egypt's first freely elected president, in mid-2013 following mass protests against his rule.

He said there were no changes to President Recep Tayyip Erdoğan's visit to Iran after allegations of a possible cancelation surfaced following Erdoğan's criticism of Tehran for trying to "increase its influence" in the region. Erdoğan had spoken to reporters on Monday at Istanbul Atatürk International Airport and said there were no changes to his planned April 7 visit to Iran. Bilgiç also said that during the visit, the second meeting of the Turkish-Iranian High Level Cooperation Council will take place and the leaders will discuss bilateral relations and regional and international developments. "Apart from living in the same region and sharing the same border, what makes relations with Iran special is that we can handle all the issues, including disagreements," Bilgiç said.

Regarding the Saudi-backed operation to halt Shiite Houthi rebels in Yemen, Bilgiç said: "There are no specific developments in logistical or intelligence cooperations." In an interview with FRANCE 24 last week, Erdoğan said that Ankara may consider providing logistical support to the mission. Meanwhile, Foreign Minister Mevlüt Çavuşoğlu said: "We said we can give every kind of support, including intelligence, but not military support." When asked if Turkey was playing a part in ensuring dialogue between the parties, Bilgiç said: "There is no mediation on the Yemen issue, but we are closely following it."

He said that claims that Turkey helped rebels stage an assault on Idlib in northwestern Syria are groundless and are "originated by the Syrian regime." The Syrian General Revolution Commission has said revolutionaries completely seized control of the city on March 28. Syrian opposition factions, under a single military group named the Army of Conquest, had started military operations against Syrian regime forces in Idlib last week. Bilgiç added that there was no unusual situation at the border gates. "There is no immigration pressure on Turkey's border, where controls have recently been tightened," he said. Syria has been gripped by constant fighting since President Bashar Assad's regime launched a violent crackdown in response to anti-government protests in March 2011, triggering a conflict that has spiraled into a civil war that has left more than 210,000 people dead, according to the U.N.