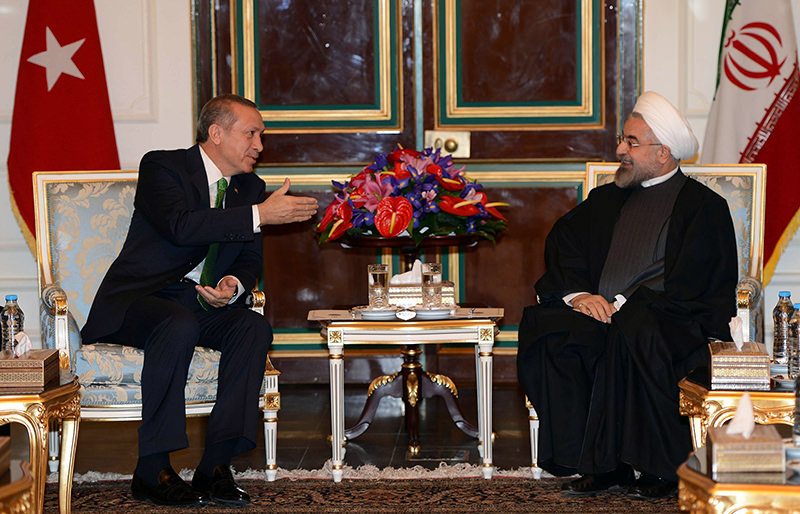 by Fatih Şemsettin Işık Apr 06, 2015 12:00 am
President Recep Tayyip Erdoğan is paying an official visit to Iran to attend the Second Turkey-Iran High Level Cooperation Council and to handle bilateral relations regarding regional and international developments. While Erdoğan is expected to hold separate meetings with Iranian President Hassan Rouhani, Iranian Supreme Leader Ayatollah Ali Khamenei is also among those with whom Erdoğan will meet in the capital Tehran.

Tensions have grown between the countries following the harsh criticism levied by Erdoğan against Iran regarding the country's involvement in the region and the visit has become a matter of debate in Iran. Last Sunday, 65 deputies from the Iranian parliament urged Rouhani to seriously warn Erdoğan over his latest statements about Iran. However, Erdoğan indicated before that it is Turkey that will decide about the future of the visit, and said: "They are not the ones who will decide on our visit. Indeed, we will. We are protecting our schedule and we are following Yemen."

The official state-run Iranian Islamic Republic News Agency reported on Sunday: "The head of the Iran-Turkey Joint Commission for Economic Cooperation Mahmoud Vaezi said that Turkish President Recep Tayyip Erdoğan is to pay an official visit to Iran on Tuesday." The first meeting of the council was held on June 9, 2014, in Ankara and was co-chaired by Erdoğan, prime minister at the time, and Rouhani.

Adnan Tabatabai, an Iranian political analyst from the Berlin-based think-tank Center for Applied Research in Partnership with the Orient (CARPO), underlined that the removal of sanctions following the nuclear deal signed between the P5+1 and Iran necessarily brings better Turkish-Iranian economic ties. "I think Iran and Turkey have been good partners in trade despite the sanctions regime imposed on Iran. But there is no doubt that an economically strengthened Iran through sanctions relief can be a stronger partner for Turkey. Without sanctions and politically delicate issues, cooperation with Iran will become more beneficial for Turkey."

Tabatabai said: "I therefore believe it is in the interest of Ankara to support the process toward the Joint Comprehensive Plan of Action, i.e., a final nuclear agreement to be achieved by the end of June.

The four-year civil war in Syria is still a source of conflict between the two countries. While Turkey maintains that Syrian President Bashar Assad has lost legitimacy since killing thousands of Syrians and causing many to flee to neighboring countries as refugees, Iran is known as an ardent supporter of Assad and backs the regime financially, militarily and politically.

Yet Tabatabai believes that there is potential for regional cooperation between Turkey and Iran and areas of cooperation must be explored in a careful manner. "The region of the Middle East is in dire need of regional cooperation. I see good reasons for Turkey and Iran to highlight common interests in terms of security, environmental issues, tourism as well as trade. If these grounds are explored in a meaningful manner, a constructive cooperation can evolve. As neighboring countries, this is in the direct interest of the Turkish and Iranian people," he said.

Erdoğan's visit is the first presidential-level visit to Iran from Turkey after a four-year hiatus. Between February 13 and February 16, 2011, former President Abdullah Gül paid an official visit to the country upon the invitation of then Iranian President Mahmoud Ahmadinejad.