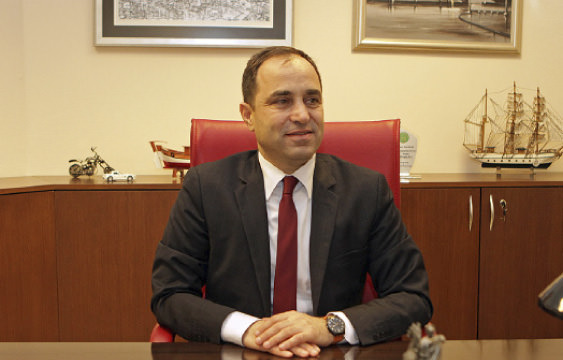 As crises and conflicts increase, especially in regions neighboring Turkey, which have larger implications, the international community, foreign policy and diplomacy are again in the limelight. Relaying a country's response to developments, spokesmen are an essential part of foreign policy and diplomacy. Daily Sabah spoke with Tanju Bilgiç, spokesman for the Ministry of Foreign Affairs, on the features of spokesmanship, foreign policy and its relation with human rights and the supposed isolation of Turkey from the international community.

Could you please define your duty as a ministry spokesman?

It is a unique and, due to its nature, crucial duty. Let me elaborate: When I say unique, it is to emphasize the fact that spokesmanship is only possible in certain government institutions. Beside government spokesmanship, this post is available in the Presidency and foreign affairs.

Naturally, as a spokesman, you are speaking on behalf of your institution, and every word is crucial. Your statements, your expressions, may be binding regarding foreign policy. To promulgate our opinions to local and international communities is one of our chief responsibilities, along with observing every development in foreign policy in the interest of our country and working quickly and in coordination with the ministry's units.

It is obvious how Turkish foreign policy increased its area of influence in the past 15 years. Spokesmanship is a challenging duty, as the media and Internet have contributed to the speed of communication, thus information; however, it is still a satisfying and enjoyable duty.

Spokesmanship in the ministry is a temporary duty. What were the most challenging aspects of your transition from your previous post to spokesmanship?

I have been in posts in which bilateral and multilateral diplomacy was essential. In every task, I have gained invaluable experience regarding my career. I have learned a lot from my senior officers. In my last duty, I was honored with the duty to represent Turkey as the consul general in St. Petersburg. I had close relations and cooperation with the media there.

Spokesmanship, on the other hand, is an exceptional line of work, as it is with many countries' foreign affairs ministries. Your responsibilities are great, and there is little room for error. You became the face and voice of the institution. You are trying to get by at a racing pace without any mistakes. The most challenging part for me was adapting to the busy travel schedule; nevertheless, the human body adapts. The duty's requirement of knowing all aspects of Turkish foreign policy is also another challenge. I am trying to overcome my shortcomings, if they happen, by consulting my colleagues who are experts in the subject matter. I, hereby, would like to thank my colleagues. On this occasion, I should also mention that the Ministry of Foreign Affairs is an exemplary institution in regards to effective teamwork.

All of the furniture in your room is black, except for your chair, which is red. Is there a specific reason for this?

If you remember, the phone line between Washington D.C. and Moscow was called the "red line" or "red phone." With the attribution of red to one of the most crucial communication lines, the color also gained meaning in diplomacy. My chair symbolizes the crucial nature of our jobs, our race against time, and the precision necessary to avoid making mistakes. I acquired this chair when I took the post as spokesman. My main aim was to always remember all of these sensitive properties of my duty. I will pass this chair on to my successor. Maybe it will become the symbol of the ministry, a reminder of the crucial duty of a spokesman.

How are your relations with your counterparts? Are there any spokesmen whom you are in contact with?

I have professional relations with my counterparts who are representing their states. With some of them, I also have a friendly relationship. I have the chance to establish contacts with my counterparts in countries with which we make bilateral or multilateral visits when I accompany our minister. These contacts have important contributions to the execution of our duty. I communicate, especially with spokesmen of the region's states and our allies, when needed, and I consult with them.

Along with your career, you also possess a doctorate. Your dissertation concerns the utilization of human rights in foreign policy. Could you talk about this, please?

Of course. I analyzed why a country would include human rights in its foreign policy and would be interested in the violation of it in other countries.

Human rights emerged as an inevitable revolutionary concept and started to transform people via basic rights, democracy and freedom movements. Through this transformation, human rights have affected states and their foreign policies, restructuring foreign affairs on the basis of human rights. In other words, states reevaluated and revised their national interests in accordance with human rights.

The most accurate example of human rights' effect on foreign policy is the transformation that started in the USSR, which was felt throughout the world, especially Europe, and ended the Cold War. At the end of this process, the Warsaw Pact was abolished, Europe's disunity was concluded, and Germany was united. Some of the former members of the Warsaw Pact joined the EU and NATO. Some intellectuals regard this transformation as the "end of history;" however, perceiving it as the triumph of human rights would be much more accurate.

If we evaluate this subject in the frame of Turkish foreign policy, protection and development of human rights is among the priorities of Turkey. In recent years, there have been extensive reforms to instill democracy and the rule of law in Turkey. As a country, we are in league with international organizations that advocate the protection of human rights, and we maintain close relations with them; we always support universal rights and values.

We are trying to maintain our principles, despite numerous crises and serious trials.

In your statements, you often state that the understanding of a "humane foreign policy" is essential in shaping Turkish foreign policy. Could you elaborate on this?

Absolutely. We are in a period of time in which our region and the whole world is going through an extensive transformation process. This process naturally causes some instability. When we look at current developments in foreign policy, we can see that most of these developments concern regions near Turkey or that these developments originate in these regions. It is our top priority to maintain a visionary, multidimensional and active foreign policy due to developments around the globe and in our region. We are trying to take preventive measures against developments, while also trying to direct them. Our foreign policy is based on our principles and universal values we advocate. These values, actually, consists of the protection of human rights, the rule of law and democratization. We do not establish our foreign policy on short-term gains or interests.

If you look at our foreign policy, you will see that we are always consistent with our principles and values, and, whatever the conditions may be, we always express them.

What is your response to comments about Turkish foreign policy isolating Turkey?

Naturally, our principled approach may cause discontent among countries that do not agree with our policies; however, as a result of this discontent, claiming Turkey is becoming isolated is a farce. When we look at the international initiatives in which our country takes part, term presidencies and the international events we host, it is obvious that our foreign policy is not isolating us from the rest of the world. On the contrary, Turkey, in recent years, has become a country whose cooperation and council is sought by the international community.

To give an example, the Alliance of Civilizations, which we co-chair with Spain, is the most populous initiative in the EU with its 141 members. We are co-chairing "Mediation for Peace" with Finland and "Global Counter-Terrorism Forum" with the U.S. From July 1, 2014, on, we have acquired the term presidency of the "Global Forum on Migration and Development" and from December 1, 2014, on, the G-20 term presidency. In November 2015, we will be hosting the G-20 summit in Antalya. Next month, we will be hosting the Foreign Affairs Minister's Meeting of NATO in Antalya. We will become the term president of the Organization of Islamic Cooperation in 2016 and host the 13th Islam summit meeting in our country. Again, in the same period, we will be hosting the 23rd World Energy Congress, along with the "World Humane Summit," which will be organized for the first time. In 2016, we are also going to bring EXPO for the first time to our country through organizing the World Botany Expo. There are many more examples.

In addition to all of these, we are furthering our relationship with Africa and Latin America, which we have been doing for 10 years. At the end of 2014, we organized the Second Turkey-Africa Cooperation Summit in Malabo, Equatorial Guinea. Our president visited Colombia, Cuba and Mexico in February. With these visits, we have signed crucial treaties that will further our political, economic and military relations. Our foreign affairs minister has also visited Vietnam, Cambodia and Thailand in the Asia-Pacific. We are increasing our relations with these countries, which are coming forth in the economy.

Also, our country, with its increasing status in the international community, has become one of the regional headquarters of the U.N. Recently, many U.N. institutions established bases in Istanbul for regional activities, including the U.N. Development Program, U.N. Women and the U.N. Population Fund.

Simultaneously, the number of our missions and embassies are increasing by the year. We have established 50 new missions in the last five years. With our 228 embassies, permanent missions, and consulates, we are the sixth country regarding the number of diplomatic representations.

In 2002, our country had 166 embassies, consulates and international organization representation. Today, this number has increased to 254. Istanbul is second after New York in having the most consulates in the world.

This is the solid evidence against comments that Turkey has become isolated. I can assert that Turkey's international status and activities are increasing by the day. This is, undoubtedly, the result of our principles.