Serbian parliament speaker: Our relations with Turkey are on the right track 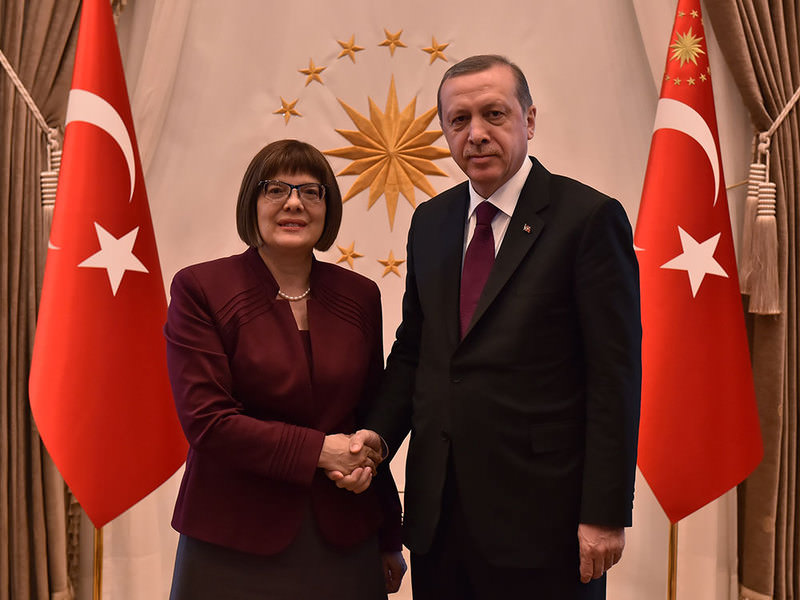 by Ali Ünal Apr 13, 2015 12:00 am
After almost two years of stagnation, Turkish-Serbian relations are regaining momentum with the visit of the President of the National Assembly of Serbia, Maja Gojkovic, to Ankara. On the first day of her official visit, Gojkovic met with President Recep Tayyip Erdoğan and she will conclude her visit after meeting with Parliament Speaker Cemil Çiçek and Prime Minister Ahmet Davutoğlu on Tuesday in Ankara.

Speaking exclusively to Daily Sabah, Gojkovic said that her visit to Turkey is a clear indication that relations are on the right track "High-level meetings with Çiçek, Erdoğan and Davutoğlu additionally consolidate the commitment of the two countries on furthering relations. I am certain that we can agree that every hurdle and every challenge has to be faced with readiness to engage in an open dialogue and determination to enhance cooperation wherever it is possible."

Serbia had postponed trilateral meetings between Turkey, Serbia and Bosnia-Herzegovina over the-then Prime Minister Erdoğan's remarks on Kosovo at the end of 2013. Relating to the question of the possibility of restarting the trilateral meetings, Gojkovic said that the role of parliament is to enhance and promote relations in the interest of peace and stability and the people it represents. "Serbia is fully committed to further promotion of good neighborly relations and regional cooperation. To be precise, the trilateral meeting you have referred to does not fall within the dimension of parliamentary cooperation, but I would like to underline that the policy of Serbia is committed to timely and effective dialogue and promotion of cooperation in the interest of all stakeholders."

Regarding the question of whether Serbia sees Turkey only as an economic partner, Gojkovic stressed that the two countries pursue cooperation not only in the economic sphere, but also in the spheres of politics and culture. "Good economic relations are more than just mere economy, and as Serbia fully acknowledges the importance of economic cooperation, at the same time, it is fully committed to promoting other forms of cooperation as well," she said.

After years of tough negotiations Serbia began accession negotiations with the EU in 2013. Touching upon this issue, Gojkovic underlined that the process of accession to the EU is the key foreign policy priority of the Republic of Serbia: "We hope that the European institutions will recognize the importance of the current political moment for Serbia and the region, and that the support for the EU's enlargement policy will be continued."

"We believe that the process of enlargement of the European Union is both in the interest of Serbia and the European Union, and that it should be perceived as the process of making Europe complete. Accordingly, Serbia has a plan that it is intensively pursuing – and that is to bring inline its legislation with the EU acquis by the end of 2018 in order to be fully prepared to become a full member of the EU. On the other hand, the dynamics of the European integration process is not something that is decided by a candidate country, but by European Union members, and Serbia wishes every success in this endeavor for itself and for Turkey, as well as the whole region and is therefore ready to promote cooperation in our common interest," she said.