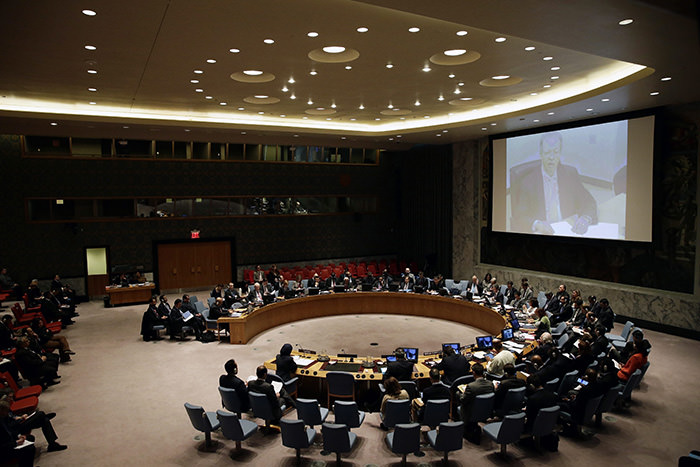 UN Special Adviser on Yemen to the United Nations, addresses the United Nations Security Council (UNSC) on the situation in Yemen, 22 March 2015. (EPA Photo)
by Anadolu Agency Apr 15, 2015 12:00 am
Turkey has welcomed the UN Security Council's resolution on Yemen to impose an arms embargo against Houthi fighters, the Turkish Foreign Ministry said in a statement Wednesday.

"We welcome the UN Security Council resolution regarding the situation in Yemen that poses a threat to regional and international security and stability," the statement said.

"The resolution constitutes a clear message and warning from the international community to the Houthi rebels towards ending violence, withdrawing from territories they have seized, including the Yemeni capital of Sanaa, and not threatening its neighboring countries," it added.

The Turkish statement added that Turkey saw the sanctions, including a general assets freeze, travel ban and arms embargo as the "right step."

Turkey expects all the parties in Yemen, particularly the Houthi group, to comply with the resolution for the unity, integrity and welfare of the country.

Turkey will continue to give any kind of contribution for ensuring peace and stability in Yemen, the statement added.

The UN Security Council adopted the resolution on Tuesday, which was submitted by Jordan; it received 14 votes in favor with Russia abstaining.

The resolution imposed a global asset freeze and travel ban on Ahmed Saleh, son of former Yemeni president Ali Abdullah Saleh, and Abdul Malik al Houthi, a Houthi leader. It also said that the Houthi militants must withdraw from seized territory and government institutions they seized.

Yemen has been in turmoil since last September, when the Houthis overran the capital Sanaa and from where they have sought to extend their influence over rest of the fractious country.
Last Update: Apr 15, 2015 4:30 pm
RELATED TOPICS