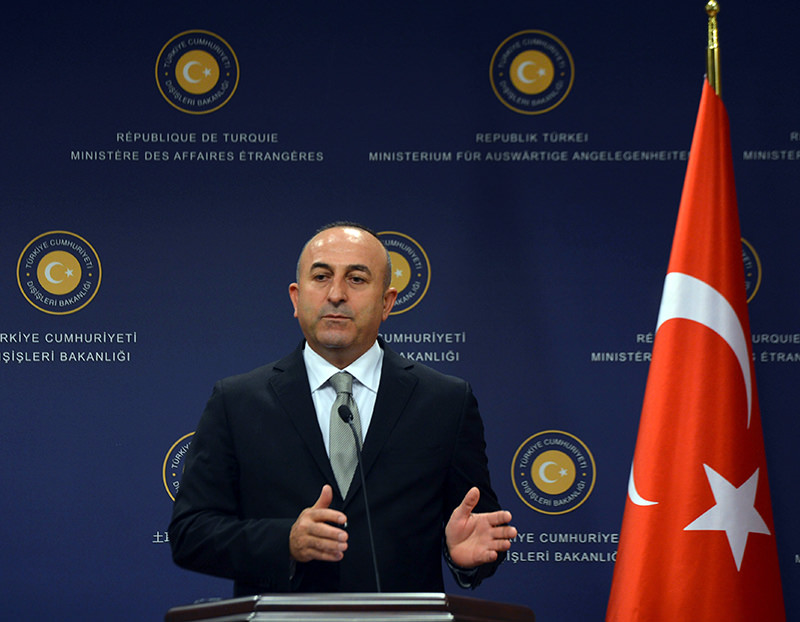 | AA Photo
by Merve Aydoğan Apr 16, 2015 12:00 am
Prior to Turkey's Foreign Minister Mevlüt Çavuşoğlu's working visit to the U.S. on April 18, the ministry's spokesperson, Tanju Bilgiç, held a press conference on Thursday in Ankara outlining the details of the minister's visit. Bilgiç stated that in discussions with U.S. officials, the foreign minister will talk about the crisis in Yemen, neighboring Syria and Yemen. Deportation demand of Turkey for the U.S. based controversial imam, Fethullah Gülen – who is listed as prime suspect in three different legal cases and accused of leading a terrorist organization – will also be on Çavuşoğlu's agenda.

During the press conference, Bilgiç reiterated Turkey's stance in regard to Pope Francis's labeling of the 1915 incidents as "the first genocide of the 20th century," saying "the pope has discriminated between Christians and Muslims with his recent remarks." Continuing his statements by providing the details of Foreign Minister Çavuşoğlu's visit, Bilgiç added that Çavuşoğlu is expected to discuss developments in the region, notably in Ukraine, Libya and Yemen along with all aspects of U.S.-Turkey cooperation in the fight against the Islamic State of Iraq and al-Sham (ISIS), Syria and Iraq, with his counterparts during the comprehensive meetings. Additionally, critical issues such as the extradition of Fethullah Gülen, who lives in self-imposed exile in the U.S., is also expected to be discussed during meetings. Gülen is accused of leading a criminal organization called the Gülen Movement and officials have reported sufficient solid evidence has been discovered proving his crimes,.

Foreign Minister Çavuşoğlu, who has been invited by U.S. Secretary of State John Kerry, will visit the Turkish American Community Center (TACC) on Sunday in Maryland. Çavuşoğlu will then continue his visit by meeting with representatives from the Turkish-American community on Sunday in Washington. As part of his visit, Minister Çavuşoğlu will meet with his counterparts in the U.S. Administration, as well as with senior members of Congress, and address the Carnegie Endowment for International Peace on Monday. Çavuşoğlu will also participate in a round table meeting with the executives of several think tanks and opinion leaders in Washington.

On April 21, Minister Çavuşoğlu will meet with the U.S. Republican Majority Leader Mitch McConnell of Kentucky, and the minister will continue his working visit by attending a meeting with the U.S. Secretary of State Kerry and other senate members, which is expected to last for two hours. Çavuşoğlu will discuss recent remarks relating to the 1915 events, and other relevant issues. Bilgiç has also underlined that Turkey's Foreign Minister will meet with U.S. National Security Advisor Susan Rice on Tuesday, in which Çavuşoğlu is expected to discuss strategies to fight terrorism and the regional crises. Moreover, the U.S. Secretary of State Kerry and Çavuşoğlu will also hold talks on current bilateral, regional and global issues.

In regard to the upcoming commemoration ceremonies in Turkey marking the 100th anniversary of the World War I Battle of Gallipoli on April 24 and April 25, Bilgiç said the presidents of 21 countries as well as 24 ministers have confirmed their attendance at the ceremonies to be held on April 24. Bilgiç also added that to date, nearly 80 countries have confirmed their attendance, as nearly 100 invitations were given. Commenting on Pope Francis' recent remarks and the European Parliament (EP) passing a resolution calling on Turkey to recognize Armenian genocide claims, Bilgiç reiterated and underlined the recent statement released. He once again said, "We do not take seriously those who adopted this resolution by mutilating history and law. The participation of EU citizens with a rate of 42 percent in the 2014 elections already implies the place that this parliament occupies in the political culture of the EU." Bilgiç also added to his statements during the press conference that the word "genocide" is not a generic term that can be used to describe any incident. He also reaffirmed that the EP must be recognized separately from the EU institutions.