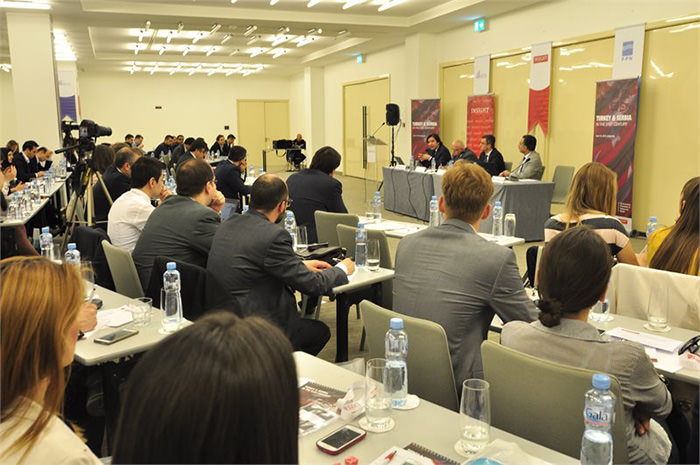 by Ali Ünal Apr 17, 2015 12:00 am
The future of Turkish-Serbian bilateral relations and its regional dimensions was discussed at a conference entitled "Turkey and Serbia in the 21st Century" in Belgrade, Serbia on Thursday.

The three-session conference was organized as an annual conference by Insight Turkey, an English-language quarterly academic journal published by the SETA Foundation, in cooperation with the Faculty of Political Sciences, University of Belgrade.

Delivering a keynote speech at the conference, Gökhan Çetinsaya, chief advisor to the Prime Ministry, said that in the last two centuries, Turkey has faced three major challenges, namely: regional challenges with the Russian Empire; the emergence of nationalism, and financial dependency on the West. Çetinkaya emphasized that Turkey has gradually become more active in foreign policy by overcoming these challenges, and making reforms that move with the changing security environment. Touching on Turkish-Serbian bilateral relations, Çetinkaya underlined the importance of relations in terms of regional stability in the Balkans. "Turkish-Serbian bilateral, regional and international initiatives will play an important role in our future," he added.

The first session of the conference was called "Party Politics & Political Transformation in Turkey and Serbia." Speaking at the session, Galip Dalay, research director of al-Sharq Forum, said that there is a new political model in Turkey that was introduced in 2002 and the concept of "New Turkey" has emerged as a result of this new political model. Claiming that there is no rupture in Turkey's democratization process, Dalay said that the deputy candidate list of all the political parties for the upcoming June 7 general election can be seen as proof of a continuation of the democratization process. "For the first time in Turkey's history, political parties represent their deputy candidates from a Kurdish background, from Alevi and Roma communities, and also from the minorities, an example of the pluralism in their party. Despite criticism, even this single example reveals that Turkey's democratization process continues to evolve," he said. Commenting on the remarks, SETA President Burhanettin Duran from İstanbul Şehir University said that with a new voice of Turkey, the country is becoming a regional power while consolidating its own democracy.

Regarding Serbia's political transformation, President of Active Serbia and Political Analyst, Dusan Janjic, said that political parties are not the main players in the political transformation. Touching on the issue of Kosovo, Janjic said that Serbia has to face it. "Kosovo is a serious task and a challenge for Serbia. Serbia has to face the Kosovo issue. That is the only way for Serbia to survive," Janjic said.

The second session, entitled "Foreign Policies of Turkey and Serbia: Convergences , Divergences and Possible for Cooperation," began with a presentation by SETA Researcher Dr. Mehmet Uğur Ekinci. Speaking on Turkey's approach to the western Balkans and Serbia, Ekinci said that the Balkans were not the priority for Turkey in the 1990's due to domestic crises. However, he added effectiveness increased during the Justice and Development Party (AK Party) period. Mentioning the Turkey-Serbia-Bosnia Trilateral mechanism, Ekinci said that the mechanism had a good basis, but was negatively affected by non-political promotions and accidents. Regarding the future of bilateral relations, Ekinci underlined that he expects a considerable improvement in relations in the near future in political, economic and cultural terms.

Journalist Bosko Jaksic from Politika newspaper, who spoke about Turkey's image in Serbia and approaches towards Turkey, said that the political image of Serbs toward Turkey was formed the during the Yugoslav war and after the conflict in Kosovo. Pointing out that there are elements of change, Jaksic said that talks between Serbia and Kosovo in Brussels will also contribute to improved relations with Turkey.

The third session of the conference, entitled "EU Accession Processes of Turkey & Serbia," started with remarks by Dimitar Bechev from the London School of Economics. Speaking on the future of EU enlargement with the integration of the western Balkans and Turkey, Bechev said that the EU is trying to deal with the euro crisis, and also has a large geopolitical crisis in Ukraine . Explaining the similarities and differences between Turkish and Serbian foreign policy, Becev said that Turkey has tried to assert itself as an independent foreign policy actor, while Serbia tries to balance foreign policy options.

Chair of the Center for Strategic Research (SAM), Prof. Ali Resul Usul, spoke on Turkey's EU accession process and its future. Stressing that the EU process should depend on a meritocratic process, Prof. Usul claimed that the EU has brought in different conditions and has "changed the rules." Defining the Cyprus question as the big problem on Turkey's way to the EU, Prof. Usul said that there have been serious mistakes made by EU officials regarding Cyprus.

"There was a great pressure on Turkey to solve the Cyprus issue, but Turkey cannot do it alone. There are two sides for negotiation. Turkish Cypriots accepted the Annan Plan in 2004 and the Greek side refused it. Notwithstanding, the EU accepted one side as the representative of the whole island. This is one of the biggest reasons for the Greek side's reluctance for peace talks." he added.

Nikola Jovanovic, Program Director for the Belgrade-based Center for International Relations and Sustainable Development, said that free trade agreement and abolishment of visas revealed that there is a ground for geo-economic strength with Turkey. "Turkey should be very welcomed in the Balkans, and it will become a major player in the Middle East, so different outcomes can be expected," Jovanovic said. "Turkey has recently become the main gas corridor from Azerbaijan and Russia to the EU, the Balkans is also seen as an important bridge," he further said.

"Insight Turkey," a quarterly journal in circulation since 1999, is published by the SETA Foundation. Currently in its 16th volume, Insight Turkey covers a broad range of topics related to Turkish domestic and foreign policy as well as developments in Turkey's adjacent regions such as the Middle East, the Caucasus, the Balkans and Europe. Covered by major indexing and databases, Insight Turkey is a refereed academic journal with a policy-oriented perspective. Insight Turkey has held its previous annual conferences in Washington, D.C. (twice), Cairo, and Brussels.
Last Update: Apr 17, 2015 3:19 pm
RELATED TOPICS