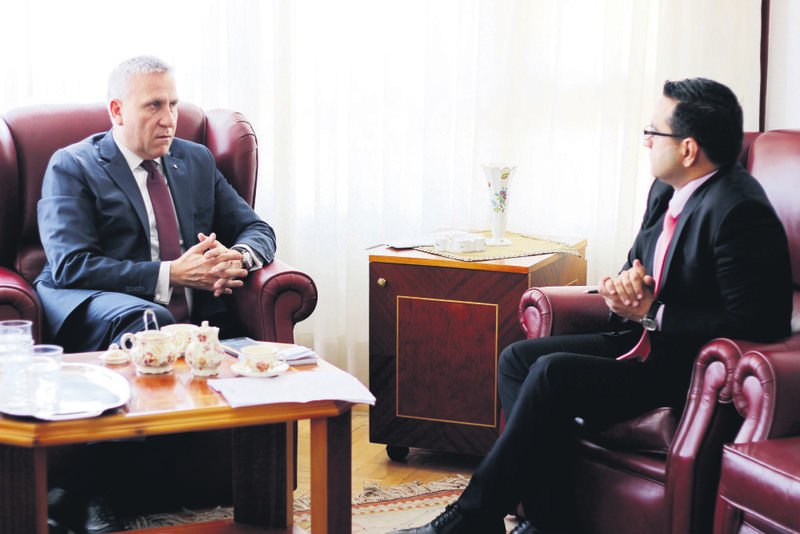 After bilateral relations with Turkey were further strengthened in recent years, Hungary is now looking forward to Ankara's support in reaching markets in Africa, the Middle East and the Far East, Hungarian envoy to Ankara told Daily Sabah in an exclusive interview

Historically intertwined, Turkey and Hungary have carried their exceptional relation into the 21st century. Hungary, one of the staunchest allies of Turkey in the EU membership process, was visited by then prime minister, President Recep Tayyip Erdoğan in 2013, which resumed the relations between the countries. Since then, both countries have shown enthusiasm in furthering their bilateral relations, whether politically, economically, or socially. Daily Sabah spoke with H.E. Gabor Kiss, Hungarian Ambassador to Turkey, about Turkey and Hungary's historical ties, the multidimensional cooperation between the two countries and Hungary's advocacy for Turkey's EU membership.

n Despite the series of battles between the Ottoman Empire and the Kingdom of Hungary for almost three centuries – and later, the Austro-Hungarian Empire – negative perceptions between the Hungarian and Turkish peoples do not exist. How would you evaluate these positive attitudes toward each other?

That is quite unique because as some history books say, we fought against each other for 150 years. I'd say that there were serious battles against each other, but you see, Hungarians were also divided by foreign powers at that time. So, there were combats and alliances with the Ottoman forces. I can assure you that Hungarians see the Ottomans as respected heroes and victims. I could quote a number of examples from literature and history alike that illustrates our joint respect for each other. For instance, Hungarians honored the memory of Buda's last pasha with a tomb epigraph that praises the pasha's heroism saying "kahraman düşman, rahat uyusun." The Turkish approach to our historical relations, I think, focuses more on the joint brotherhood back in Central Asia: Both of us are the grandsons of Attila – I hear many times.

Both countries share a long-standing common history. Do you think that this shared past constitutes a common ground for cultural affinity?

Undoubtedly the common past means a cohesive force, but we must not forget our common cultural treasures that provide a similarly strong foundation for understanding. Let's think of the similar motifs in the folk songs of the two peoples that were first researched by Bela Bartok accompanied by Adnan Saygun. Or consider the impact of Turkish cuisine on Hungarian gastronomy – stuffed paprika, poğaça, and others. According to my experience, Turks and Hungarians easily understand each other; we share similar attitudes of mind.

Turkey and Hungary does not have outstanding political problems and have good bilateral relations, but relations have gained momentum in the past three years. What were the motives behind this positive trend?If you take a perspective of bilateral relations in general, the relations between Turkey and Hungary is exceptional with regard to cultural similarities as well as the friendly approach to each other. Therefore, I'm very positive. In the last two years, the relationship has been boosted tremendously, due to not only the mutual sympathy that we share, but also because our leaders realized that this special relationship offers great potential benefits for both countries. Hungary has always been a devoted supporter of Turkey's campaign to join the European Union and will continue to play a leading role in this process. For Turkey, Hungary is an important ally not only in NATO, but also when it comes to economic affairs. On the other hand, the possible energy hub position of Turkey is very important for Hungary. When it comes to bilateral trade relations though, we still have a great many fields to cooperate on and a great many results to achieve. Turkey, which has excellent relationships with Africa, the Middle East and the Far East as well, could provide enormous support for Hungary's efforts to expand its reach into third world markets. We would like to complement Turkish investments with our know-how, technologies and services.

Despite a wide-range of EU country's strong opposition toward Turkey's EU bid, Hungary has displayed a very supportive stance since the beginning of the process. What are the motivations behind this support?As I already said, Hungary fully and firmly supports Turkey's EU membership. We are convinced that it is a vital interest of the EU, the region and Hungary to welcome Turkey into the European Union. Hungary strongly believes that Turkey's influential foreign policy, its economic strength and its energy hub role could contribute to the strengthening of the EU's role as global player. If we want to be competitive on the world market, if we want to see Europe growing, I think, we need new impetus. So, blocking or stopping or slowing Turkey's EU integration process down does not really make sense to us. In every forum, we are emphasizing that we want Turkey to be a part of the EU. The 2004 and 2007 enlargements led towards the reunification of Europe, but it is not yet finished; the Western Balkans and Turkey are yet to complete the process. Culturally speaking, the EU and Turkey are similar, yet at the same time there are many differences. If we do it in an intelligent way, I think we can overcome some of the challenges we may face. Turkey also has taken great steps forward – among others – by signing the readmission agreement. I'd like to emphasize that Hungary will continue to support the accession process of Turkey. It is high time that accession negotiations regain their momentum, and I hope this year will offer real opportunities for this.

What can Turkey learn from Hungary's EU bid experience?Persistence! That is something that has to be kept in mind; if the final goal is set, we cannot necessarily afford to get offended too much or stick to every one of our original goals. It is a natural endeavor to bring national interests to the fore, but you also have to think about global interests and a more comprehensive, larger context for Turkey. I'm quite sure that it is also very important for Turkey to become a member of the EU. I'm very positive.

What are the areas of cooperation between the two countries in the framework of economic relations?During the visit of then Prime Minister Erdoğan to Hungary, Hungarian Prime Minister Viktor Orban said: "Very few leading countries in the world today can boast such resounding economic success other than Turkey." Mr Orban stressed that the Turkish example is a source of encouragement for Hungary as well, as everything can be achieved if a nation can join forces and its leaders can draw up viable economic plans. The prime ministers in 2013 agreed to double the trade volume between the two countries in 5 years, which was $2.3 billion at the time. Now, the bilateral trade volume between Turkey and Hungary soared to around $2.7 billion, but our aim is to increase this figure to $5 billion within a few years' time. Last year, we actually saw 10 percent growth, but we still have a long way to go. Hungary is strong in agricultural exports, machinery, car manufacturing and electronics. Interestingly, Turkey is exporting exactly these products, so we really complement each other. On the other hand, we still have a lot of potential in other sectors, like energy, water and waste management and information technology. Many of your readers have probably not heard about this, but Hungarians participated in the construction of Turkey's sewage system back in the early 1930s. Thus, in İzmir and other parts of Turkey, Hungarian engineers created the water management systems. We have excellent technology in water and waste management – for instance, we are using wastewater to create energy. This is something very special, so we would like to offer this in the Turkish market.

What are the possible alternatives to improving relations in the energy?Hungary could and wishes to be an important partner for Turkey in the field of energy. One aspect of this is the gas transmission issue; with the so-called Turkish Stream project, Turkey has a good chance of becoming a significant energy and gas hub in the region. We hope that we can find a way to supply Hungary with a portion of this gas, but in order to do this, we need to work on the supply route together. Another field is nuclear energy. Hungary has been using this technology for almost 40 years, and we'd like to share our experiences and know-how with our Turkish colleagues.

Does Hungary see Turkey as only an economic actor or does it have expectations from Turkey in different fields?There are so many mutual interests shared by our two countries; the bilateral relations between Turkey and Hungary are developing rapidly, not only in the political and economic field, but in the sphere of education, culture and public diplomacy as well. The fields of culture, education and science are priority areas of cooperation, which involve student exchange programs and excellent cooperation in the maintenance of historical sites, such as the Rakoczi museum in Tekirdağ or the Bartok museum in Osmaniye, as well as the mosque in Pecs. One of the current ongoing projects is the renovation of the 16th century Ottoman poet Gül Baba's octagonal shrine in Budapest, and I must mention our recently opened cultural institutes in Istanbul and in Budapest as well.

One of the critical issues that we need to work on is the number of days that Turkish tourists can spend in Hungary. There are two major destinations for Turkish tourists in Hungary: Budapest and Esztergom. Most of the Turkish tourists – I'm talking about only 60,000 tourists a year – come as part of a three city tour that covers Budapest, Vienna and Prague. They have no idea of the Ottoman relics, the cultural treasures or the healing powers Hungary can offer. Our goal, together with the Hungarian government, is to promote Hungary as an independent destination for Turkish tourists. We would like Turkish tourists to come and spend maybe five days and get healed by the thermal waters of Hungary. We would like them to come and see the mosque in Pecs and the castle of Szigetvar. We will be commemorating the 450th anniversary of the death of Sultan Süleyman the Magnificent next year and we are working on locating the turbe in which his insides were buried in Szigetvar. Thus, we are expecting a high number of visitors for this anniversary.

Another important field would be university cooperation. I myself have worked on seven sister university projects in the last four years with Marmara University, Ankara University, Namık Kemal University in Tekirdağ and Dumlupınar University in Kütahya as well as many other universities, not only in the framework of classical Erasmus programs, but rather in professorial exchange programs and scientific cooperation. We also would like to see as many Turkish university students as possible to sign up for the Stipendium Hungaricum scholarship program of the Hungarian government, which is a full scholarship program for Masters and Ph.D. students in any field of study.
Last Update: Apr 19, 2015 8:05 pm
RELATED TOPICS