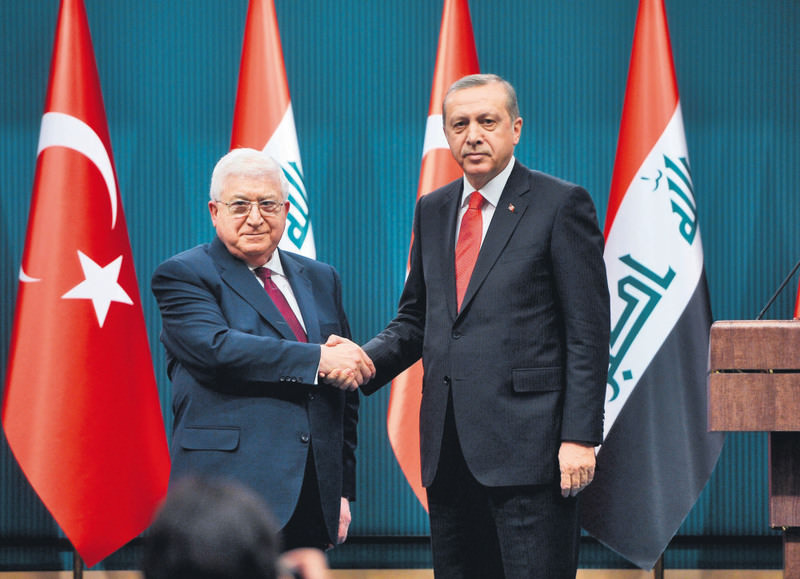 In a joint press conference with his Iraqi counterpart, President Erdoğan said the target of ISIS is Muslims and underlined that the source of ISIS's financing must be questioned. They also discussed the crises in Yemen and Syria

President Recep Tayyip Erdoğan has said that the Islamic State of Iraq and al-Sham (ISIS) is a virus that is attempting to destroy Muslim communities around the world. Erdoğan welcomed Iraqi President Fuad Masum on Wednesday and held a joint press conference following their meeting, where he harshly criticized ISIS and its activities for causing damage to Muslims as a whole and Islam as a religion. The Yemeni crisis and the ongoing civil war in neighboring Syria were also among the matters discussed.

"The target of ISIS is the Muslims in the region" Erdoğan said, and underlined that the source of ISIS's financing must be questioned. Masum agreed with Erdoğan and also used the term "virus" for ISIS, saying that ISIS is a major virus that is spreading very quickly. He said: "If the virus is not destroyed, it may spread to other countries in the region and eventually throughout the world," and called for joint cooperation to fight the terrorist organization.

Masum praised Turkey's support in fighting ISIS and said: "Turkey is an extremely important neighbor for Iraq." He added that they look at Turkey's development, economy, social reforms and politics with admiration.

Turkey has been one of the prominent supporters of the Iraqi government, providing military training and arms as well as humanitarian aid. Turkish leaders have repeatedly called on the Iraqi government to avoid taking a sectarian stance against its citizens while fighting extremist groups. The ongoing war in Syria was reportedly among the topics discussed between the two presidents.

Erdoğan harshly criticized Europe regarding the recent sinking of migrant boats in the Mediterranean Sea where hundreds of people have drowned. "I condemn Europe's attitude regarding the sinking migrant boats in the Mediterranean," Erdoğan said, and reiterated that Turkey has opened its doors to about two million people out of humanitarian motives, saying that Europe's stance is simply unacceptable.

Responding to a question about his views on recent reports claiming U.S. President Barack Obama will not refer to the 1915 events as genocide, Erdoğan said that he was not expecting Obama to refer to them as genocide.

"I would prefer not to hear such a thing from Obama, neither was I expecting him to refer to the 1915 events as genocide," Erdoğan said, adding that the U.S. stance regarding the matter is clear. He added that Turkey's stance and position are clear. "On the April 24 commemorations, Turkey will talk about peace, not Armenia," Erdoğan said, adding that Armenia will talk about Turkey and insult the country while Turkey emphasizes a conciliatory approach to the issue.

Erdoğan consistently expresses disapproval of terrorist organizations like ISIS. Most recently, he said that ISIS is the greatest enemy of Islam and added that they subject Muslims to great suffering and create a wrong and negative perception of Islam.

Masum and a high-level governmental delegation will be staying in Turkey until April 23 to discuss regional and international developments with special emphasis on the fight against ISIS. He will also hold meetings with Prime Minister Ahmet Davutoğlu and Parliamentary Speaker Cemil Çiçek.

"The Iraqi President Masum will participate in the Peace Summit as part of the centennial anniversary of the Battle of Gallipoli of 1915," a statement from the Presidency said.
Last Update: Apr 23, 2015 12:10 pm
RELATED TOPICS