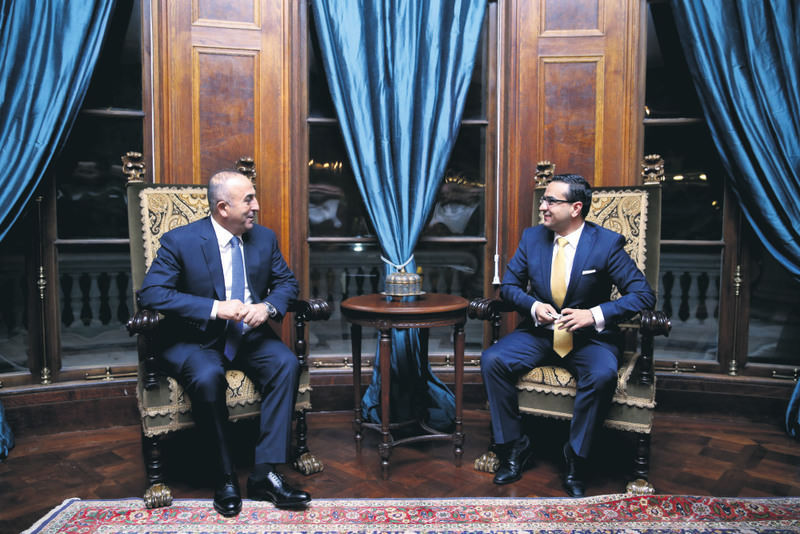 FM Çavuşoğlu, who is currently visiting the U.S., said Turkey wants to commemorate those who lost their lives in violence during the waning years of the Ottoman Empire together with Armenia

Foreign Minister Mevlüt Çavuşoğlu, who is currently visiting the U.S., said Turkey wants to commemorate those who lost their lives in violence during the waning years of the Ottoman Empire together with Armenia. In an exclusive interview with Daily Sabah, Çavuşoğlu claimed Armenian lobbies' constant efforts to coerce and threaten all to push the issue of the 1915 incidents onto the agenda every year, had created fatigue in Washington, adding that it was no surprise that the number of U.S. representatives who signed a petition supporting Armenian genocide claims was decreasing.

He said he perceived no untoward stance concerning Turkey during his talks with U.S. officials. "Pope Francis and the European Parliament's bizarre decisions created some waves, but there seems to be nothing else," he said.

Çavuşoğlu also underlined the importance of the statement released by the U.S. Council of Muslim Organizations, the largest umbrella group of mainstream Muslim-American organizations, which argued that characterizing the events of 1915 as genocide without proper investigation by independent historians will damage the efforts aimed at achieving reconciliation between Turks and Armenians. The group also said that it shared the pain suffered by Armenians during this period, but warned that all those who lost their lives during the upheavals should be commemorated without focus on ethnicity or religion.

A statement released by Prime Minister Ahmet Davutoğlu attracted significant attention, Çavuşoğlu said, adding, "Our president [Recep Tayyip Erdoğan] had released a similar statement last year. Our prime minister released a statement on the anniversary of Hrant Dink's death. When people realize that Turkey doesn't reject the pain Armenians suffered, they are surprised," and pointed out that this year will be the first time Ottoman Armenians who died will be remembered with a religious ceremony. "What we truly want is to commemorate together with Armenia. Shared pain should unite, not divide. However, Armenia is trying to take the easy way out and force through political decisions. This won't resolve the issue. Our prime minister's statement on the eve of general elections took courage and showed that Turkish society has a similar stance."Çavuşoğlu admitted that his Washington program was hectic, meeting with the leaders of American-Muslim groups, members of the local Syrian community and visiting the Global Policy Institute founded by Istanbul's Bahçeşehir University. He also met with representatives of the local Turkish community, which he praised as united as never before.

He also paid a visit to the mosque and cultural center, whose construction began in 2013 and will be opened by a ceremony with Erdoğan.

His meeting with U.S. Secretary of State John Kerry lasted two hours, an hour longer than planned. The meeting was encouraging, Çavuşoğlu said, explaining that they had an opportunity to discuss developments in Syria in detail, including who controlled which region and what can be done to help the Free Syrian Army (FSA).

Çavuşoğlu criticized the organized campaign to portray Turkey as unwilling in the fight against the Islamic State of Iraq and al-Sham (ISIS). "Those who believe these claims say that ties between the U.S. and Turkey are fraying. We have done our part against ISIS. We told everyone that any fight against ISIS should include land operations. We told the countries who criticized our determination, proving that Turkey has done much more than those countries that failed to keep their militants from going overseas. Secretary Kerry and President Barack Obama are well aware of the true state of bilateral ties. The phone conversation between our president and Obama was very positive. We may differ in technical details, but our position remains the same."

Çavuşoğlu explained the tactical differences between Turkey and the U.S. in ways to tackle ISIS were narrowing, and his meetings with U.S. officials were very encouraging. "Turkey and the U.S. will sign an agreement on sharing information on foreign fighters. Our U.S. Embassy is currently negotiating the deal," he said.

Efforts to help the FSA continued, with Kırşehir being the current center of training and equipping FSA members, he said. "The İncirlik Base is used by drones for intelligence gathering. That's nothing new. But for military operations launched from İncirlik, we need to know what part of a comprehensive plan these operations will be. Without an agreement on this matter, opening the base is not on our agenda."

The U.S. and other countries providing armed help to groups fighting ISIS need to be aware of the danger of the weapons they give falling into the hands of terrorists, Çavuşoğlu warned. "We are constantly telling them of the danger. We saw what happened in Mosul. Once ISIS took it over, the group was able to seize heavy weapons. We are telling our American counterparts about the danger posed by handing weapons to the PKK or PYD [Democratic Union Party]. They are aware."

On the issue of Cyprus peace talks, Çavuşoğlu said he believed there was a chance peace talks could resume between the two sides once the presidential elections in Turkish Cyprus come to an end.

He said the circumstances were suitable for discussions to restart.

When asked about one of the most sensitive issues, the extradition of Fethullah Gülen, the U.S.-based leader of the Gülen Movement who is accused of a range of crimes, including spying, infiltrating key state institutions and efforts to topple the government, Çavuşoğlu was succinct: "No comment."

Several reports by U.S. media outlets recently warned of a regional nuclear arms race if Iran ever developed nuclear weapons, with Turkey mentioned among countries that could develop such armaments. "We have repeatedly said that Turkey has no desire to develop nuclear weapons and is against any country in the region having them as well. Turkey has not and will never acquire nuclear weapons."

During his visit to the U.S., no official asked him about the coming June 7 parliamentary elections, Çavuşoğlu said, but added: "However, I believe the U.S. has ordered such a public survey to see how things stand in Turkish politics. My opinion is that they didn't ask me because they have a good idea about the elections' outcome."
Last Update: Apr 23, 2015 5:00 pm
RELATED TOPICS