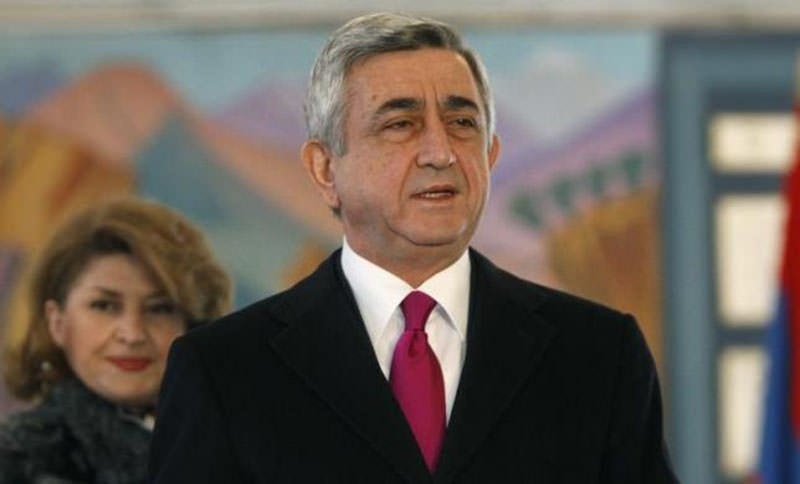 Armenian President Sargsyan (R) and his wife leave a polling station after voting during the presidential election in Yerevan, February 18, 2013 (Reuters Photo)
by Daily Sabah with Agencies Apr 23, 2015 12:00 am
Armenia's President Serzh Sargsyan said on Wednesday he was ready to normalise relations with Turkey.

Speaking ahead of Friday's commemoration of the deaths of Ottoman Armenians during World War I, Serzh Sargsyan said there should be no preconditions in restarting the peace process and that he would not insist that Turkey acknowledge the genocide.

Serzh Sargsyan also made significant remarks during his interview with CNN Türk on Wednesday, the Turkish version of International CNN. He said that he expected a "stronger message" from his Turkish counterpart Recep Tayyip Erdoğan on the centenary of the 1915 events in order to unblock frozen relations.

Sargsyan said, "I hope President Erdoğan sends a stronger message on April 24 and that relations can be normalised."

Armenia, a country of 3.2 million, signed accords with Turkey in October 2009 to establish diplomatic relations and open their land border. The accords were designed to allow the opening of borders and to set up a formal diplomatic relationship, but efforts to normalise the relations eventually faltered.

On 22 April 2010, Armenian President Sargsyan suspended the ratificiation process although he announced at the time that Armenia would not suspend the process of normalisation of relationships with Turkey as a whole.

During his interview with CNN Türk, Serzh Sargsyan said he had withdrawn the accords from parliament at the time to send a "political message" to Turkey.

"The ratification of the protocols is something that we want, but it takes two to tango and it does not only depend on us," he said.

Turkey accepts that many Ottoman Armenians died in during World War One during their forced deportation from Anatolia, but denies the Armenian assertion that up to 1.5 million were systematically killed and that it amounted to genocide.

Dozens of government delegations, including the presidents of France, Russia, Serbia and Southern Cyprus, are expected to take part in the commemorations on Friday.

U.S. President Barack Obama is not expected to use the word "genocide" in a statement to mark the anniversary.
Last Update: Apr 23, 2015 4:21 pm
RELATED TOPICS