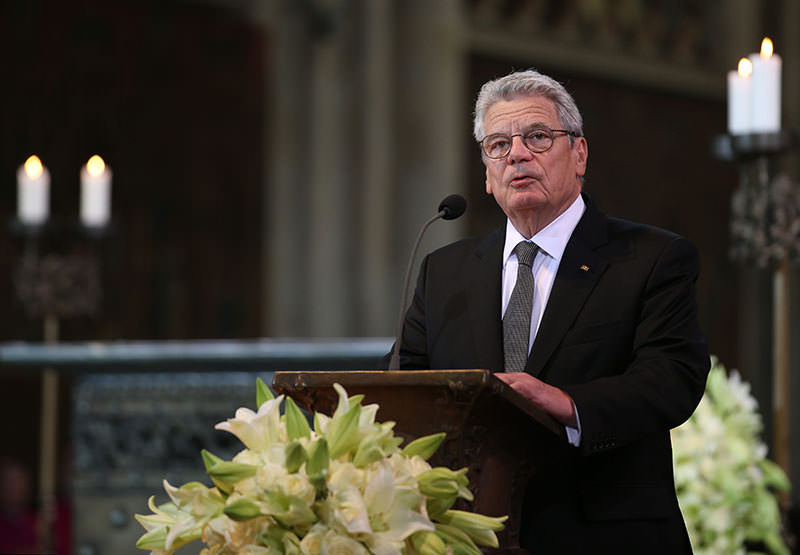 | AP Photo
by Anadolu Agency Apr 24, 2015 12:00 am
German President Joachim Gauck has labeled the forced relocation of Armenians under the Ottoman Empire as "genocide", despite calls by Turkey not to politicize the tragedy of 1915.

"The destiny of Armenians during the First World War constitutes an example for the history of mass destructions, ethnic cleansings, forced deportations and yes, genocides in the 20th century," Gauck said on Thursday, at a memorial service at the historical Berlin Cathedral, on the centenary of the tragedy.

Gauck said Germany also bore responsibility and complicity for what he referred to as "genocide against Armenians" in 1915.

His remarks marked the first time that a German president has used the word "genocide" when referring to the forced relocation of Armenians under the Ottoman Empire in 1915.

Armenians suffered great torments during the World War I, but the term of "genocide" is disputed among historians and remains a source of tension between Turkey and its neighbor Armenia.

German President Gauck argued that hundreds of thousands of Armenians had been victims of "planned" and "systematic" murders in eastern Anatolia during the World War I.

He claimed that Christian minorities of Assyrians and Pontian Greeks in Anatolia had also been victims of similar crimes during the final years of the Ottoman Empire.

Christian Democrat lawmaker and head of the Foreign Affairs Committee Norbert Roettgen said that the German parliament should clearly label the tragedy of 1915 as "genocide."

"We owe this to the victims and their relatives," he argued.

Regarding the controversial motion, Turkey's Prime Minister Ahmet Davutoğlu said it was "unacceptable."

Some of Germany's three-million-strong ethnic Turkish community have also strongly criticized the motion for being one-sided, and based on anti-Turkish sentiments.

Bekir Yilmaz, director of the Turkish Community in Berlin, or the TGB, said in a press conference on Wednesday that politicizing the 1915 events would harm reconciliation efforts between Turks and Armenians, and further alienate Turkish immigrants in German society.

Thousands of Turkish immigrants are expected to rally in Berlin on Saturday to protest against allegations claiming a "genocide" was committed against Armenians in 1915.