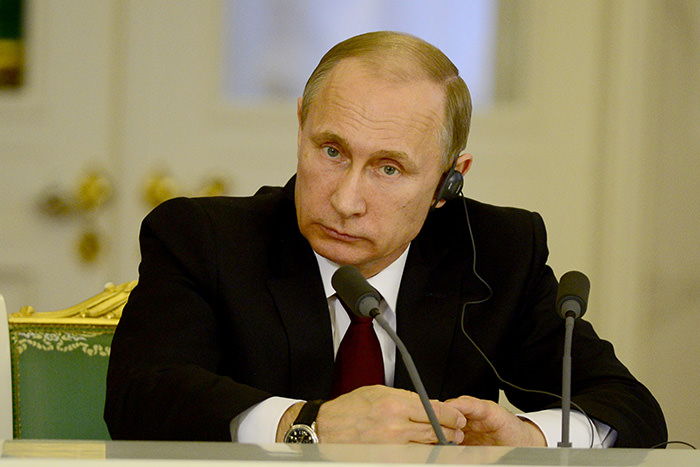 |AA Photo
by daily sabah Apr 24, 2015 12:00 am
Prime Minister Ahmet Davutoğlu has criticized remarks made by Russian President Vladimir Putin referring to the 1915 events as genocide, published in a statement posted on an official website on Friday.

Late on Thursday, Davutoğlu said that the attendance of the Russian and French presidents at a commemoration event in the Armenian capital for the 1915 events in the Ottoman Empire will cast a shadow on the Minsk Group's impartiality. Along with Putin, French President François Hollande also attended the commemoration ceremony in the Armenian capital Yerevan on Friday.

"Any attitude that incites and defames our history will abuse our trust, regardless of who and where it comes from. We are ready to discuss and face history, as long as we are on the same page," Davutoğlu said.

"April 24, 1915, is a mournful date, related to one of the most horrendous and dramatic events in human history, the genocide of the Armenian people," Putin said in a letter posted on the Kremlin's official website.

Turkey also recently recalled its ambassador to Vienna, Hasan Göğüş, to Ankara for consultations on Tuesday after the Austrian parliament issued a declaration that recognizes the Armenian killings during World War I as genocide.

Turkish Foreign Ministry also condemned remarks made by Russian President Vladimir Putin in a statement released on its official website.

"Considering the systematic killings, deportations and the ill treatment against Turkish and Muslim people that have been committed by Russia in the Caucasus, Central Asia and in eastern Europe over the past century, we believe that the Russian president should be the one that knows best what a genocide is and what its legal dimensions are," the statement read.

"In order to help resolve the issue between Turkey and Armenia, Russia should leave its bias approach regarding the 1915 events and encourage Armenia and the Armenian people to respond to Turkey's reconciliation calls."

Turkey commemorates the 100th anniversary of the Battle of Canakkale to be held from April 24 to 25, with presidents, parliamentary speakers, prime ministers, and officials from all over the world.

The 1915 events took place during World War I when a portion of the Armenian population living in the Ottoman empire sided with the invading Russians and revolted.

The relocation by the Ottomans of Armenians in eastern Anatolia following the revolts resulted in numerous casualties.Turkey does not dispute that there were casualties on both sides, but rejects the definition of "genocide."
Last Update: Apr 24, 2015 7:45 pm
RELATED TOPICS