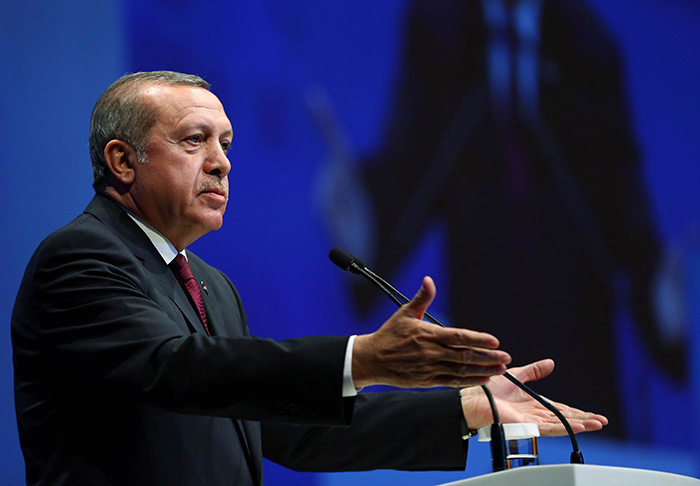 |AA Photo
by Mehmet Çelik Apr 25, 2015 12:00 am
President Recep Tayyip Erdoğan has criticized the countries which have termed the killings of the Ottoman Armenians in 1915 as 'genocide', during his speech at the Independent Industrialists' and Businessmen's Association (MÜSİAD) 23rd General Assembly on Saturday.

"I invite the countries that make genocide claims to clean up the bloody stains on their history," Erdoğan said, condemning the attendance of Russian President Vladimir Putin and French President François Hollande to the memorial service at the Tsitsernakaberd Genocide memorial complex in Yerevan, Armenia on Friday.

"While we give peace messages to the world, Russia, Germany, and France, among others, criticize us by supporting the lies told by Armenians," said Erdoğan.

Furthermore, Erdoğan questioned the West's colonial past saying, "They should first answer for the oppression throughout their history, France goes to Algeria and Rwanda, what are you doing Africa?"

Regarding German President Gauck's labelling the forced relocation of Armenians under the Ottoman Empire as 'genocide' on Friday, "Germany is the last country to speak on this issue," president added.

Turkey commemorated the 100th anniversary of the Battle of Gallipoli with presidents, parliamentary speakers, prime ministers, and officials from all over the world attending to events which started on April 24 and continued on April 25.

Turkey calls Armenia and invites the international community for an establishment of a joint commission of historians to investigate the 1915 incidents, including offering to open its official archives for the investigation.