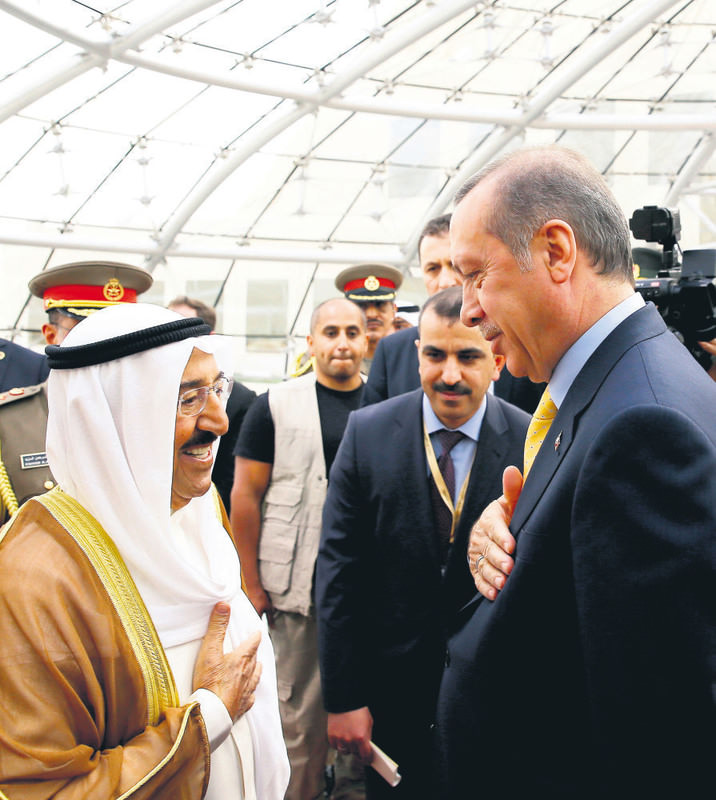 President Recep Tayyip Erdoğan signed an agreement to improve bilateral political and commercial ties and further develop consultations on regional developments during yesterday's visit to Kuwait. During the visit, the president also invited local investors to Turkey and explained the government initiatives implemented to make the country a more attractive investment destination. Another purpose of the visit was to turn a new leaf in ties with Gulf countries. Kuwaiti officials also voiced their intention to facilitate improved relations between Turkey and other Gulf countries. All aspects of developments in Yemen, Iraq and Syria were discussed along with bilateral relations. It was noted that Erdoğan's visit to Kuwait was not only crucial for regional issues, but also for mutual relations and commercial cooperation.

It was noted that Erdoğan's visit to Kuwait was not only crucial for regional issues, but also for mutual relations and commercial cooperation. According to information obtained from authorities at the President's Office, the visit was important for increasing investments from Kuwait. Erdoğan also attended a dinner with one of the leading businessmen in Kuwait, Mohammed Alshaya and various other important businessmen.

All aspects of economic cooperation were discussed as well Turkey's leap into the defense industry. The need to cooperate in this field was one of the main topics on Erdoğan's agenda and it was decided that discussions about cooperation in the defense industry will continue. Both countries confirmed that they are willing to increase their trade volume to $1 billion in 2016, which is currently around $569 million.

Both parties underlined the success of the Kuveyt Türk Participation Bank in investment banking and declared that they are willing for Kuwait to increase its investments in Turkey. Turkish contractors will strive to increase their business volume in Kuwait and pleasure was expressed regarding a Turkish company's win of the tender for the construction of the new terminal at Kuwait International Airport. The increased number of Kuwaitis purchasing real estate was also discussed, along with the increase in tourists from Kuwait, which reached 133,000 last year. Erdoğan returned to Turkey following the dinner that was organized in his honor.

New Era in the Gulf

Erdoğan was welcomed in Kuwait with a special program. He was greeted by Kuwaiti Emir Sabah al-Ahmed al-Jaber al-Sabah at the airport and was welcomed to the Bayan Palace, the emir's main palace. Contrary to general protocol, not only Erdoğan and his family, but his entire retinue was also hosted at the palace. Abundant space was reserved for news on the visit in all local Kuwait newspapers. While Kuwaiti authorities said Erdoğan's visit indicated a new era in relations between Turkey and Gulf countries, they all underlined Erdoğan's latest visit to Saudi Arabia and the support he has provided for the Saudi-led operation in Yemen.

Erdoğan received a similarly warm welcome and hospitality in Kuwait as he did from Saudi King Salman bin Abdulaziz Al Saud. The warm welcome, hospitality and importance Kuwait placed on Erdoğan's visit was also evident in the meetings. Erdoğan held separate meetings with Deputy Prime Minister and Minister of Foreign Affairs of Kuwait Sabah al-Khalid al-Sabah, President of Parliament Marzouq al-Ghanim and Prime Minister Jaber al-Mubarak al-Hamad al-Sabah along with the emir. The emphasis throughout the visit was on the new era that is flourishing in relations between Turkey and Gulf countries.

According to data from the Ministry of Economy, Kuwait's economy heavily depends on crude oil, with the majority of income and gross national product obtained from crude oil. Due to the fluctuations in crude oil prices and the decrease in Kuwait's income in recent years, along with political tensions, Kuwait's public spending has been limited. On the other hand, the economy depends on the hydrocarbon sector and since the country has vast amounts of reserves, the negative effect of the decrease in crude oil prices is expected to be at a minimum in Kuwait.

Kuwait is one of the world's major countries in terms of capital exports. According to the corporate investment strategy of the Kuwait Investment Authority, funds are being evaluated in long-term investments in various countries and long-term stability is preferred in this respect rather than high risks that promise high profits.

Bilateral trade between Turkey and Kuwait

When the progress of commercial relations between Turkey and Kuwait is examined, it becomes evident that the balance of foreign trade is usually for the benefit of Turkey. The tensions in the region led to a 9 percent decrease in last year's trade volume between the two countries. The negative developments in Iraq prevent Turkey from taking full advantage of the potential of close proximity to the Kuwaiti market. The trade volume between the two countries last year was around $569 million. While $372.5 million of this amount made up the exports from Turkey to Kuwait, Turkey's imports from Kuwait were around $196.2. Kuwait's share in Turkey's total exports is approximately 0.2 percent.