PM Davutoğlu calls on PKK to leave arms before elections 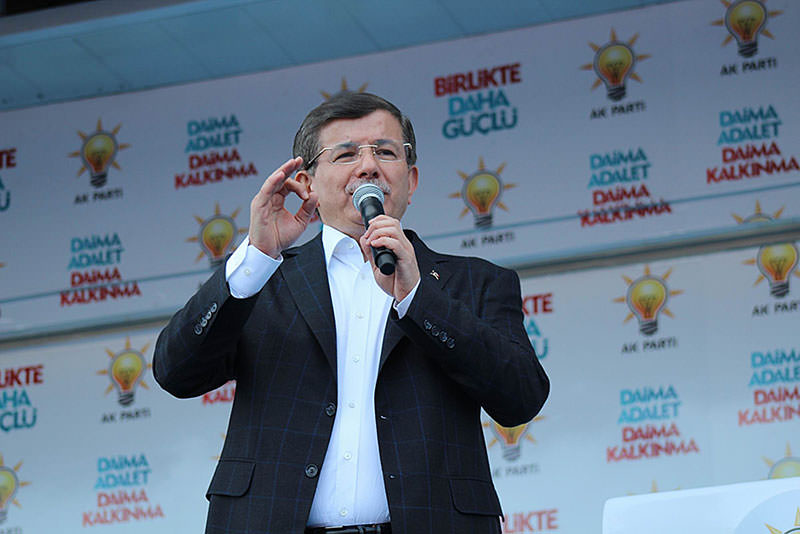 | IHA Photo
by Ayşe Şahin May 03, 2015 12:00 am
Turkish Prime Minister Ahmet Davutoğlu said the outlawed PKK should abandon arms before the June elections, branding their resistance to laying down arms a means of blackmail.

Speaking to journalists during his visit to Düsseldorf in Germany, Davutoğlu assured them that the reconciliation process which the government is pursuing in a bid to end the Kurdish question is still on track.

The PKK's imprisoned leader Abdullah Öcalan called on the PKK to lay down their arms in his Nevruz message, which was read out during the festivities in March, in a landmark step, indicating that the decades-long insurgency will morph into a democratic movement and will seek Kurds' rights via democratic means. The HDP, Öcalan and senior PKK officials had been on the same wavelength over their will to abandon arms before the Ağrı incident took place. The assault by the terrorists in Ağrı raised doubts over the sincerity of the PKK to leave arms.

"It is not right to say the process has ceased," Davutoğlu told reporters adding, "It is blackmail to refrain from abandoning arms ahead of the elections. They have to make a choice. We demand they leave arms before the elections."

A vivid election campaign is underway in Turkey as the general elections draw near, with the leaders of political parties holding rallies across the country full of promises that aim to attract voters. The June elections are closely monitored in Germany too, where a considerable number of Turkish citizens living in the country are expected to go to the polls. The voting in Germany plays a critical role in shaping Turkey's political future and the votes will have a major impact on the results of the elections.

Roughly 1.4 million potential Turkish voters in Germany have rendered it a critical region that could determine the fate of the country, and has thus prompted party leaders to convey their election campaigns abroad to muster support.

Turkey has effectively entered the general election period and will go to the polls on June 7. Turkish voters in Germany will begin voting as of May 8, so election haste has already gripped the Turks residing in the country. Seeking their votes, Turkish leaders, one after the other, are heading to Germany to hold rallies and carry out their election campaigns abroad. Turks in Germany, who could vote for the presidential elections in August, will be able to vote in the general elections for the first time. German officials reportedly also keep tabs on the campaigns of the Turkish parties abroad.

The voting in Germany is thought to have a key role in determining the political future of Turkey. It is deemed critical as it has the potential to change the Constitution – an aspiration of the ruling party to switch to a presidential system – or assist the Peoples' Democratic Party's (HDP) ability to surpass the election threshold and pave the path for their entrance into Parliament.

The leader of the Republican People's Party (CHP) went to Düsseldorf on April 25 to hold his first rally. The leader of the Nationalist Movement Party (MHP), Devlet Bahçeli also headed to Oberhausen in Germany on April 26. Prime Minister Ahmet Davutoğlu visited Düsseldorf on Sunday, where he attended the inauguration ceremony of the consulate. HDP leader Selahattin Demirtaş kicked off his election campaign in Berlin on March 29 where he called on the Turkish-Kurdish electorate to vote for his party to pass the threshold. He said their votes could have a determining effect on the elections. The leaders in common seek to garner votes from the Turkish citizens abroad by offering them a chance to choose their representatives.

A recently conducted survey by the Germany-based Turkish-German Foundation showed, of the Turks living in Germany, a little over half of those surveyed support the Justice and Development Party (AK Party) in the upcoming elections. The survey, which was conducted with 1,410 participants from eight different cities in Germany, found 53 percent of those surveyed would vote for the AK Party in the June 7 general elections.

Females made up 48 percent and males 52 percent of the participants in the survey, which was conducted in the cities of Cologne, Berlin, Düsseldorf, Stuttgart, Frankfurt, Hannover, Munich and Dortmund. While 53 percent of participants indicated support for the AK Party, the CHP had 17 percent, the HDP 14 percent and the MHP 13 percent support out of 1,410 participants. The remaining 3 percent, according to the survey, indicated that they would vote for other parties.

With the HDP devoting every effort to pass the 10 percent election threshold, and the latest election poll by GENAR showing 10.9 percent support from the voting public, Şen said nearly 850,000 people of Kurdish origin live in Germany, and that there are almost 450,000 Kurdish voters who will increase the HDP's votes in the upcoming election. In this regard, votes from abroad are expected to aid the HDP in its efforts to pass the 10 percent election threshold.