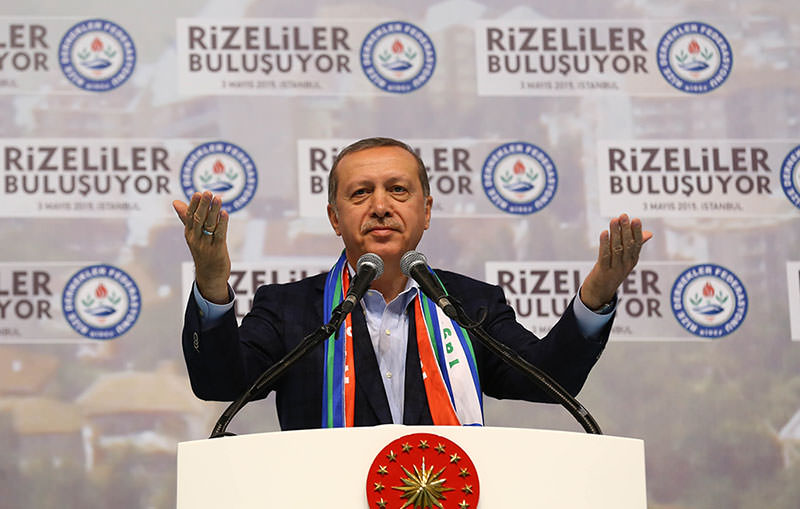 | AA Photo
by Sena Alkan May 03, 2015 12:00 am
President Recep Tayyip Erdoğan on Sunday addressed his fellow citizens in the northern province of Rize as part of an event in Istanbul's Sinan Erdem Convention Center and underscored that conditions are now ready for a switch to a presidential system.

Welcoming the demonstration of love from his fellow citizens, Erdoğan said that Turkey couldn't continue with a parliamentary system any more.

The current constitution was drafted in 1982 after the 1980 military coup. Despite numerous revisions over the last 30 years, it still bears the stamp of military tutelage according to constitutional experts.

Slamming pro-Kurdish People's Democratic Party (HDP) co-chair Selahattin Demirtaş's comparison of Istanbul's iconic Taksim Square to Islam's most sacred monument, the Kaaba in Mecca, for the May 1 Labor Day demonstrations, Erdoğan said that the nation will give the necessary answer to those who portray Taksim as the Kaaba in the June 7 general election.

Targeting some Turkish media outlets, Erdoğan said that even though some media outlets claim that they are objective, they fiercely attack him, despite getting elected with 52 percent of the vote, and the ruling Justice and Development Party (AK Party), which garnered half of the votes.

"For the last 40 years, they have tried to mute us. But, the nation spoke loudly on behalf of our ideologies. Our voice is the nation, not the media," Erdoğan added.

Erdoğan continued his speech by saying, "The nation has seen no period that it is represented so widely."

He further criticized the main opposition Republican People's Party (CHP) election promise that allegedly implied it would close down a considerable percentage of religious vocational schools, Imam Hatip schools, if the party comes into power.

"They have issues with our nation's culture and values," added the president.

The CHP's election manifesto said that education in religious vocational schools would be revised in accordance with the needs of religious officials.

According to figures, the opening in the Presidency of Religious Affairs in 2015 is around 22,000 and the personnel necessity for the Directorate is around 13,000. Religious schools produce 300 graduates per year. Considering the party's election promise, a large number of religious vocational schools will be closed down.

The event in Istanbul witnessed a few colorful moments as the people of Rize showed their affection to the president with amusing banners and slogans in a Rize accent, such as, "Uncle Tayyip I chased her for a long time, I am getting married now. Will you be my marriage witness?" "They say, Erdoğan the Master called you, we left the tea garden [where many Rize citizens work to earn money] and came."