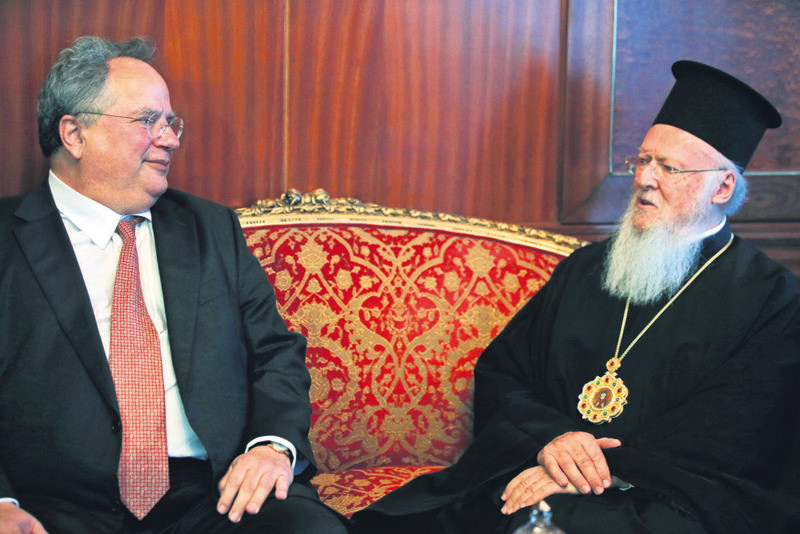 Nikos Kotzias, the new Greek Minister of Foreign Affairs, visited Istanbul on Monday, meeting Prime Minister Ahmet Davutoğlu. He later paid a visit to the Fener Greek Orthodox Patriarchate. During the closed-door meeting, the Aegean issue and ways to empower bilateral ties were discussed. Kotzias is scheduled to meet Foreign Minister Mevlüt Çavuşoğlu today. Prior to his visit with Çavuşoğlu, Kotzias spoke to Daily Sabah about his trip to Turkey and his agenda for Ankara. Coming up with a series of suggestions for Turkey, including measures to increase safety between the two countries and cooperation between Greece and Mediterranean countries, Kotzias said he would try to end conflicts regarding the Aegean region during his term in office. Kotzias also spoke on the resolution of the Cyprus issue, saying that he reacted positively to the election of Turkish Cyprus's new president, Mustafa Akıncı. He emphasized that he keeps hopes alive for finding a solution to the issue. Explaining that the U.S. has come up with alternative suggestions for Turkey-Russia energy relations, Kotzias remarked that the election results in the U.K. may pose a threat to the integrity of the EU.

Explaining that the U.S. has come up with alternative suggestions for Turkey-Russia energy relations, Kotzias remarked that the election results in the U.K. may pose a threat to the integrity of the EU. He also criticized the harsh attitude of the EU towards Greece.

Daily Sabah: This is going to be your first visit to Ankara as a minister. What will you negotiate with your Turkish counterpart Mevlüt Çavuşoğlu?

N.K.: Yes, I was in a delegation that paid an official visit to Ankara after a 50-year interval when George Papandreou was the foreign minister in 1999. We negotiated with the-then Turkish Foreign Minister, İsmail Cem. Those negotiations aimed at opening Turkey's path to the EU. I am now heading there as foreign minister of a left-wing government that was elected for the first time and focuses on negotiating, production of ideas and finding methods of resolution.

D.S.: What will you negotiate with Çavuşoğlu?

N.K.: We will discuss getting to know each other more closely, approving our intents and wishes about measures to increase security again. I was heading the delegation consisting of a group of young scientists who organized the first package of increased safety measures, and they then turned out to be assigned to high-ranking political positions or became professors. Secondly, we aim to analyze to what level the ongoing exploratory negotiations between the two countries have reached and review and accelerate our targets.

Also, we would like to develop economic relations between the two countries even further. Our relations are progressing remarkably well at the moment. It is estimated that the number of Turkish tourists to Greece this year will even exceed the number of Russian tourists, which corresponds to more than one million. The trading volume between Turkey and Greece has quadrupled and investments have increased. We will also touch on culture and education and revise the stability and security issues in our region. We agree with Turkey on some points, while we have differing opinions on some other points regarding these topics. Our interests generally coincide. We will search for a resolution on the points where our interests do not coincide.

The most crucial aspect of this meeting to get aquainted, in my opinion, is to create an environment of mutual trust.

D.S.: There is one more subject, that of the mosque construction in Athens that was approved by the Greek parliament. What are the latest developments?

D.S.: The issue of minorities in Thrace is also occasionally brought to the agenda. Minorities face some problems such as the Mufti Office issue. Do you consider negotiating with minority representatives on those issues?

The doors of the Ministry of Foreign Affairs are always open to the legal representatives of the population in Thrace, including the minority groups identifying themselves as Turkish-descent, Pomak or Roma.

D.S.: Will the Greek Prime Minister Alexis Tsipras pay a visit to Ankara? I guess it is his turn.

N.K.: During my visit to Ankara we will touch upon the reciprocal visits by the Greek and Turkish prime ministers and cooperation between the two governments. I think we will clarify those subjects at the negotiations we are to hold in Istanbul and Ankara.

D.S.: The assignment of Tsipras to the prime ministry as a young politician was widely discussed in the Turkish as well as the European press. What is special about Tsipras in your opinion? Also, some groups among your EU partners oppose the Tsipras government.

N.K.: There is great sympathy toward Tsipras among the European youth, especially the Spanish and Portuguese youth. This is because Tsipras has become the symbol of a brand new and positive perspective for European youth, including the youth of Turkey. For this very reason, some forces wish for the failure of our government. We are in harsh negotiations with these forces that do not favor our success. Despite the weak points and obstacles this new and young government faces, we are trying for success by remaining stable and strong on our path.

D.S.: What do you think about Akıncı, the new Turkish Cypriot president? Have you ever had a chance to meet him? Is a new hope rising for the resolution of the Cyprus issue?

N.K.: I once came across him in the past. He gave an impression to me that he felt himself to be a Cypriot. He also has the responsibility and obligation to serve the interests of Turkish Cypriots. He is probably familiar with the structure and cultural codes of Greek Cypriots since he knows Greek very well.

Hope should always be kept alive. Our philosophy should be the historic philosophy of optimism. This requires efforts from all of us to find a real resolution to the Cyprus issue. We are obliged to work to enable the integrity, sovereignty and independence of the island and to preserve all the rights of both Greek and Turkish Cypriots. Also, we should not forget the rights of three other minority groups on Cyprus, the Maronites, the Roma and the Armenians.

D.S.: Do you have a message for the Turkish public before your Ankara visit?

N.K.: We are required to come up with politics that will favor both the Turkish and Greek public. Another thing we must settle on is the contribution of Turkey and Greece to the stability of our region, which has become complicated lately. There is a triangle of instability in our region. This triangle comprises Ukraine, Libya and Syria and creates various problems for Turkey, Greece and the future of the EU. Consequently, our countries, which have a long-standing political history in the region, can make positive contributions to the stability and safety of our region.

D.S.: As we come to the issue of stability and safety do you think the relations Greece is to develop with Egypt, Cyprus and Israel without taking Turkey into account would disturb Turkey?

N.K.: I don't think so. Turkey is a great country that has the capacity to negotiate with other countries. I believe that Turkey favors any kind of cooperation to provide stability and safety in the region. The efforts Greece exerts in this framework are not against Turkey in any case. We side with cooperation based on mutual agreements. I am about to convey a positive and tangible suggestion to Ankara on this matter.

Between 1967 and 1974 during the military junta in Greece he was arrested multiple times for being a member of the banned Communist Party. Until 1989 he was active in the central committee of the Greek Communist Party.

He specialized in the foreign policy and political systems of Brazil, India and Russia and worked as the head of the political planning department of the Greek Ministry of Foreign Affairs. He also headed the delegation at the Turkish-Greek relations negotiations that issued the package of measures to increase safety as part of the earthquake diplomacy of 1999. Also in 1999, he took part in work on the EU constitution and the reports prepared for Turkey's EU membership. He published 24 scientific works, including "The Paradox of Turkish-European Relations," about Turkey-EU relations. Kotzias was appointed minister of foreign affairs for the left-wing Syriza government that came to power after the elections held on January 26, 2015. He speaks German and English.
Last Update: May 12, 2015 12:56 pm
RELATED TOPICS