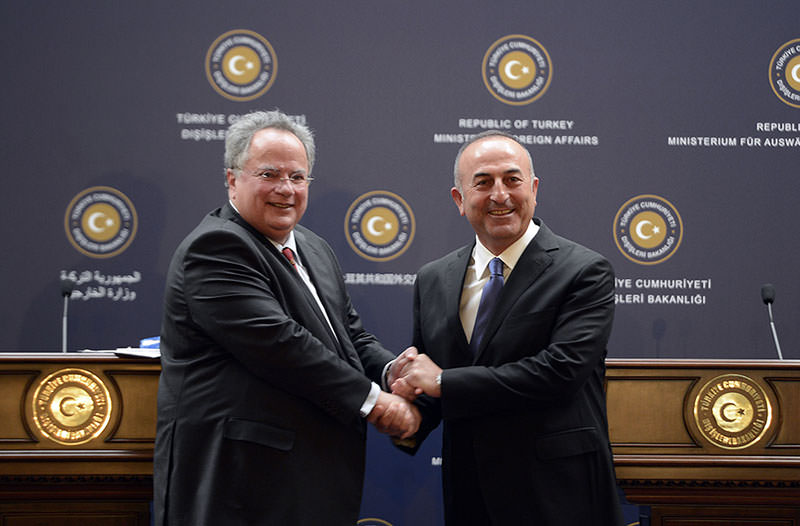 | AA Photo
by Merve Aydoğan May 12, 2015 12:00 am
The newly appointed Greek Minister of Foreign Affairs Nikos Kotzias and Foreign Minister Mevlüt Çavuşoğlu held a joint press conference on Tuesday in Ankara emphasizing the significance of a resolution on Cyprus. Çavuşoğlu underlined that Turkey's main aim is to build stronger relations between the two nations. In this regard, Kotzias also said that cooperation between Greece and Mediterranean countries is at the top of his agenda during his term.

Kotzias paid an official visit to Turkey as part of the NATO Foreign Ministers Meeting that will take place on May 13-14 in Antalya. In addition to the NATO meeting, a series of other sessions will also take place with ministers of foreign affairs from member countries. Emphasizing enhancing bilateral ties between Turkey and Greece, both Kotzias and Çavuşoğlu underlined the necessity of resolving the Cyprus issue. Çavuşoğlu said that Turkey and Greece have a common will to resolve the ongoing dispute on the island.

"We [Turkey] are greatly pleased with the re-launching of the stalled peace talks on Cyprus. As Turkey and Greece, we are determined to encourage peace on the island of Cyprus and between the two leaders," he said, adding: "Within the basis of the joint declaration, Turkey is as committed as ever to the continuation of negotiations and achieving a permanent resolution on Cyprus."

"Permanent peace and resolution will be achieved this year if Greece and Greek Cypriots also display the same determination toward resolution. Turkey and Greece will continue to take confidence-building steps," he said.

Commenting on the Cyprus issue and conflicts regarding the Aegean region, Kotzias said that Greece aims to "eliminate the hesitations toward the region," and reiterated that the resumption of the U.N.-brokered peace talks present a "window of opportunity" to reunify the divided island of Cyprus. Underlining the importance of securing and providing the rights of all residents of the island, Kotzias said that Cyprus must become an independent country without the need of any guarantor country.

Regarding the conflicts in the Aegean region, Kotzias said, "We are aiming to resolve the conflicts and aim to lower the tensions in the region." He further commented on Turkey's accession to the EU, saying that Greece strongly supports Turkey's membership and added: "We'd like to see an EU that supports and adopts Turkey's political stance."