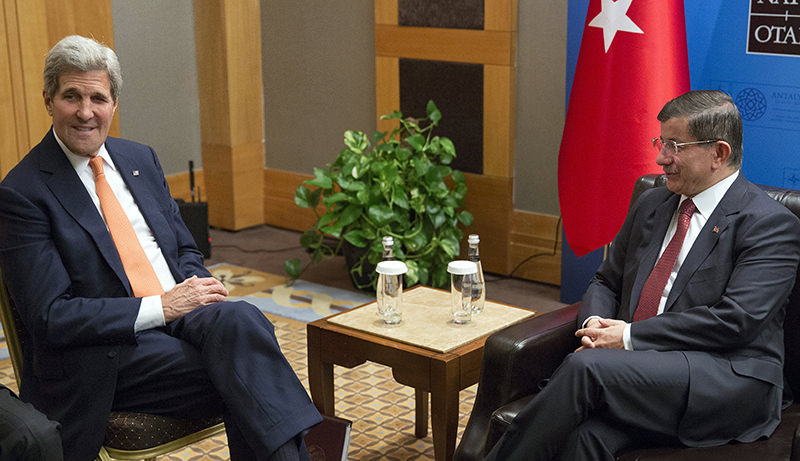 Being the only NATO country that shares a land border with ISIS-controlled areas, the terrorist organization is a direct threat to Turkey’s national security PM Davutoğlu stressed during the NATO Foreign Minsters Meeting in Antalya

As the civil war in neighboring Syria enters its fifth year, Prime Minister Ahmet Davutoğlu stressed that the conflict has not only led almost 2 million Syrians to become refugees in Turkey, but it also created a threat to national security as the militant Islamic State of Iraq and al-Sham (ISIS) is right on the other side of the border.

Speaking at the NATO Foreign Ministers Meeting held in the Mediterranean province of Antalya on Wednesday, Davutoğlu said: "We see an increasing violence of terrorism at our doorstep," as the ISIS threat grows. "Being the only NATO country that shares a land border with ISIS-controlled areas, the terrorist organization is a direct threat to our national security."

At the start of the meeting, NATO Secretary-General Jens Stoltenberg told reporters that one of the important issues at the meeting, in different formats, will be how NATO can do even more in fighting terrorism and ISIS.

Commenting on combatting ISIS, Davutoğlu stressed: "In order to eliminate ISIS in Syria and Iraq, which should be seen as a single theater of operation, the international community needs to better cooperate and coordinate its response. We should also deal with the root causes of ISIS terror. And that requires a comprehensive strategy including military, political, economic and humanitarian dimensions. As terror has no religion, we should strongly resist those who attempt to associate Islam with terrorism. Such correlation is not only utterly wrong, but it also undermines our efforts toward the de-legitimization of ISIS."

U.S. Deputy Secretary of State Antony Blinken recently said Turkey is a critical partner in the fight against ISIS and that the U.S. has very close cooperation with Turkey. Speaking at a press briefing with European journalists via teleconference last Friday, Blinken said the U.S. has more than 70 partners in the global coalition to counter ISIS. Underlining Turkey's role in the effort, Blinken said the two countries have strong collaboration: "Collaboration is already strong and we are in very close contact, virtually every day, to look at how we can continue to deepen it."

In efforts to combat the flow of foreign fighters who pass through Turkey to join ISIS in Syria, Turkish officials have requested more support from the West at every opportunity and are counting on more solid steps to stem the flow. As part of Turkey's efforts, the police force has tightened security at transfer points such as airports, terminals, bus stations and rental car companies with a special risk analysis system and a team tasked with tracking suspicious foreigners who travel to Turkey for the first time and those who are minors and who do not have a hotel reservation. According to statistics from the Interior Ministry, almost 13,000 people have been barred from entering the country and 1,300 people have been deported.

Davutoğlu pointed out to NATO foreign ministers that more than 220,000 people have lost their lives so far in Syria and 12 million have become refugees and internally displaced people: "There are more than 1.7 million Syrians in Turkey. While hosting them, we have spent around $5.6 billion so far while the total amount of aid from the whole international community has remained only at around $356 million."

He said that Turkey has been supporting a political solution to end the crisis that can only be achieved through a genuine political transition on the basis of the legitimate demands and aspirations of the Syrian people: "Without the Syrian National Coalition [SNC], any political process in Syria will face a lack of legitimacy both in the international community and on the ground."

He also stressed the importance of strong partnership between NATO members and that NATO's partnership mechanisms pave the way for a comprehensive approach to tackle emerging risks and threats. "Therefore, we see NATO's partnership mechanisms as an important part of the alliance's cooperative security task. We also expect all partners to act in line with the basic parameters of the partnerships," he said, adding that Turkey is ready to host a NATO summit after the one scheduled for 2016 in Warsaw.


Turkey to support Afghanistan both bilaterally and through NATO

Davutoğlu said NATO member countries need to consolidate their achievements and continue to help the Afghan authorities to implement the needed reforms during the country's decade of transformation.

"Achievements of the past 13 years in Afghanistan are still fragile. That is why we see the continuation of NATO and the wider international community's presence in Afghanistan necessary beyond 2016," he said, adding that that there is still a long way to attain the capacity to cope with the evolving security challenges in Afghanistan.

"With this understanding, we have assumed the responsibility of Kabul International Airport, in addition to and in line with our Resolute Support Mission framework nation responsibility in the Kabul area. We will also contribute $60 million for the financial sustainment of the Afghan National Security and Defense Forces from 2015- 2017," he said.

At the start of the year, Parliament authorized the government to continue posting Turkish troops in Afghanistan for two more years under a new NATO mission. According to the new legislation, the government will be able to send troops to Afghanistan to support the new NATO-led mission, Resolute Support, which was launched on Jan. 1, 2015.

As the NATO-led International Security Assistance Force ended its 13-year combat mission in Afghanistan at the end of 2014, the mission has evolved into training and advising the developing Afghan security forces. The legislation also grants the government authority to permit foreign army personnel to be transported to and from Afghanistan through Turkey.We need to consolidate our achievements and continue to help the Afghan authorities implement reforms, Turkey's prime minister has said.

Ahmet Davutoğlu was speaking at a session of the NATO foreign ministers' meeting being held in Turkey's southern province of Antalya on Wednesday.

The session, attended by NATO Secretary General Jens Stoltenberg, was organized to discuss the alliance's Resolute Support Mission in Afghanistan.

Davutoğlu said: "In Afghanistan, we all know that there is still a long way to go in order to attain the capacity to cope with the evolving security challenges there."

"Achievements of the past 13 years in Afghanistan are still fragile. That is why we see the continuation of NATO's and the wider international community's presence in Afghanistan and, if necessary, beyond 2016."

Stoltenberg said: "Let us not be under any illusions. Afghanistan remains a dangerous place. We will continue to stand with Afghanistan and the people of Afghanistan in the future."

Davutoğlu said that Turkey will support Afghanistan, both bilaterally and through NATO, as long as it is necessary and so long as the Afghan people require.

"With this understanding we have assumed responsibility for Kabul International Airport in addition to and in line with our Resolute Support Mission framework responsibility in the Kabul area," said Davutoğlu.

Resolute Support is a NATO-led, non-combat mission. It was launched on January 1, following the conclusion of the previous NATO-led ISAF mission.

Davutoğlu added that Turkey will also contribute $60 million to the Afghan army over the 2015-2017 periods.

"As the self-proclaimed Islamic State of Iraq and al-Sham (ISIS) threat grows, we see increasing violence and terrorism at our doorstep. Being the only NATO country that shares a land border with ISIS-controlled areas, this terrorist organization is a direct threat to our national security," said Davutoğlu.

The premier said to eliminate ISIS in Syria and Iraq, which should be seen as a single theatre of operation, the international community should better coordinate its response.

"We should also deal with the root causes of the ISIS terror. And that requires a comprehensive strategy including military, political, economic and humanitarian dimensions," said Davutoğlu.

He also said: "As terror has no religion, we should strongly resist those who attempt to associate Islam with terrorism. Such correlation is not only utterly wrong but it also undermines our efforts toward the de-legitimization of ISIS."

Saying the conflict in Syria has entered its fifth year, Davutoğlu said more than 220,000 people have lost their lives so far.

"While hosting them, we have spent around $5.6 billion so far, while the total amount of aid from the whole international community has remained only at around $356 million," he said.

"While extending our hand to Ukraine, we should not forget particularly the sufferings of the Crimean people," Davutoğlu said, reiterating that the illegal annexation of the peninsula could not be accepted.

"Maintaining our contacts with the Crimean Tatars and preventing their isolation is crucial in this regard," he said.

Turkey sent a delegation to Crimea on April 29 to evaluate the situation of Crimean Tatars since the 2014 annexation by Russia.

According to the Foreign Ministry, there are 280,000 Crimean Tatars in Crimea, making up about 13 percent of the total population.


"Today, we are facing multiple challenges in and around our region. Intra-state conflicts, ethnic and sectarian divisions, domestic power struggles with cross-border effects are all evolving around NATO territories," said Davutoğlu.

He added that these challenges left negative effects not only on collective security, but also on public order, economies, cultures and societies.

"Preparedness and responsiveness have become two indispensable elements when shaping our security and defense policies. It is with this understanding that Turkey has offered to assume the responsibility of framework nation in the Very High Readiness Joint Task Force for 2021," said Davutoğlu.

"Turkey feels the direct impact of every development that emerges from areas of instability surrounding [our] southern and eastern flanks. We are poised to act with our allies in order to make a vital and constructive contribution in facing the full spectrum of challenges," he added.

Stoltenberg said: "We are going to discuss how NATO is addressing the challenges and the changing security environment."

He added: "It is about keeping NATO strong, investing in our collective defense, increasing the readiness and preparedness of our forces."

"I am very grateful that Turkey is hosting this meeting. Turkey is a cornerstone in our alliance, situated as it is, close to both the south and east," he said.
Last Update: May 14, 2015 6:55 pm
RELATED TOPICS