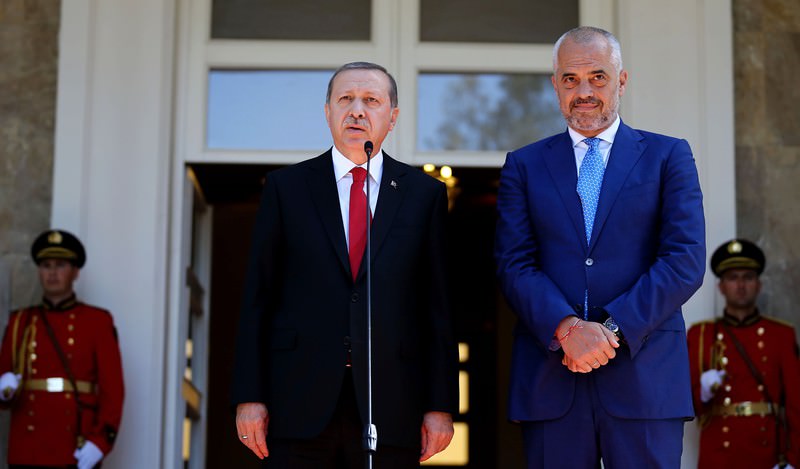 by Daily Sabah with Wires May 13, 2015 12:00 am
Turkey's President Recep Tayyip Erdogan called on Europe on Wednesday to take in more migrants and refugees from Syria and Iraq, saying Turkey has borne the brunt of the refugee crisis and has been sheltering about 2 million Syrians.

Turkey has spent $5.6 billion to care for 1.7 million Syrians and 300,000 Iraqis living in refugee camps or in Turkish cities, Erdogan said during his visit to Albania.

Speaking after meeting with his Albanian counterpart Bujar Nishani, Erdogan said developed countries should do their "duty" and offer solutions for the migration crisis.

We all witness "how the immigrants are dying in the Mediterranean and elsewhere," Erdogan said. Hundreds of migrants have died so far this year in sea crossings trying to reach Europe. Most have perished when their overcrowded boats overturned or sank as they sailed from Libya to Italy.

"Can we be insensitive to these homeless, unsheltered poor people?" Erdogan asked. "Shouldn't the developed countries offer a solution to these people? They have their obligations too. Everybody should do their own duty."

Erdogan's one-day visit to Albania was aimed at focusing on economic ties, and the president was accompanied by a delegation of about 100 businessmen. Both Erdogan and Nishani urged their governments and businesses to increase trade.

Turkey is one of Albania's main trading partners and investors.

Erdogan said Turkey wanted to more than double the $430 million annual trade exchange, adding that some 300 Turkish companies have invested $2.7 billion in Albania in infrastructure, the steel industry, banking, energy and telecommunication.

During his visit, Erdogan was to inaugurate the start of construction on a 20,000-square-meter mosque in the capital Tirana that will host approximately 4,500 people.

Albania has close ties with Turkey as it was part of the Ottoman Empire between 1479 and 1912. Since the two countries share a common culture and history, and thanks to strong ties, Turkey has always supported Albania, being a strong promoter of Albania's NATO membership in 2009 and continuing to train Albanian army officers.