Turkish President Erdoğan in Albania: There is no winner in terrorism, all sides lose 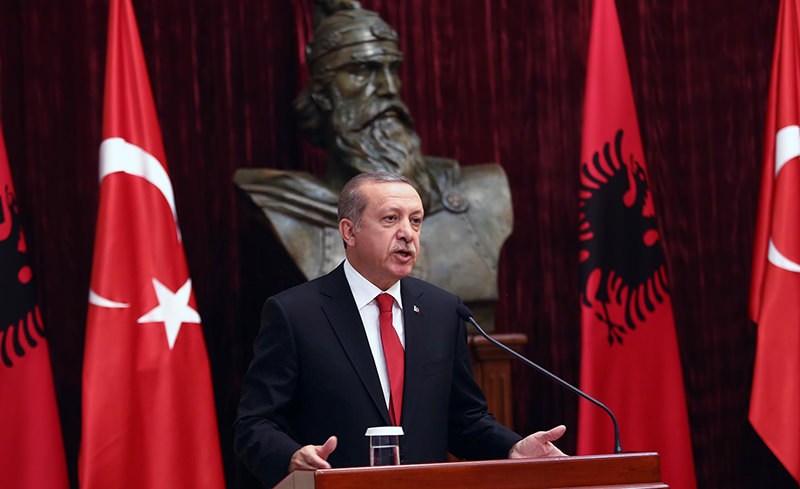 | DHA Photo
by Nurbanu Kızıl May 13, 2015 12:00 am
President Recep Tayyip Erdoğan has said that there is no single winner or loser in terrorism as all sides lose.

The Turkish President was welcomed in an official ceremony in the Albanian capital Tirana on Wednesday while he was visiting Albania to hold a series of bilateral meetings and attend the opening and groundbreaking ceremonies of mosques.

"Turkey is a country which has suffered a great deal because of terrorism" the president said, highlighting the fact that terrorism only results in losses.

Erdoğan stated that there are some who want to damage the atmosphere of peace in the Balkans through terrorist activities while noting that Turkey attaches great importance to peace, stability and prosperity in the Balkans. He said that Turkey is well aware of what it is like to struggle with terrorism and added: "Whether it is in the Balkans or other places throughout the world, we do not want anyone from any religion or ethnicity to pay a high price because of terrorism."

The Turkish president also criticized the European Union's lack of care for illegal immigrants, who he claimed were left to die. He stated that Turkey cannot remain inactive while poor, homeless and destitute people are seeking refuge and that developed countries should take on the responsibility to find solutions to their problems.

It was reported that Turkey's Presidency of Religious Affairs is financing the building of the Balkan's largest mosque, Namazgah Mosque in the Albanian capital Tirana, which will be able to host 4,500 people.

Albania has been a NATO member since 2009 and is a candidate to become a member of the European Union.