Foreign ministers call for peace at NATO summit in Antalya 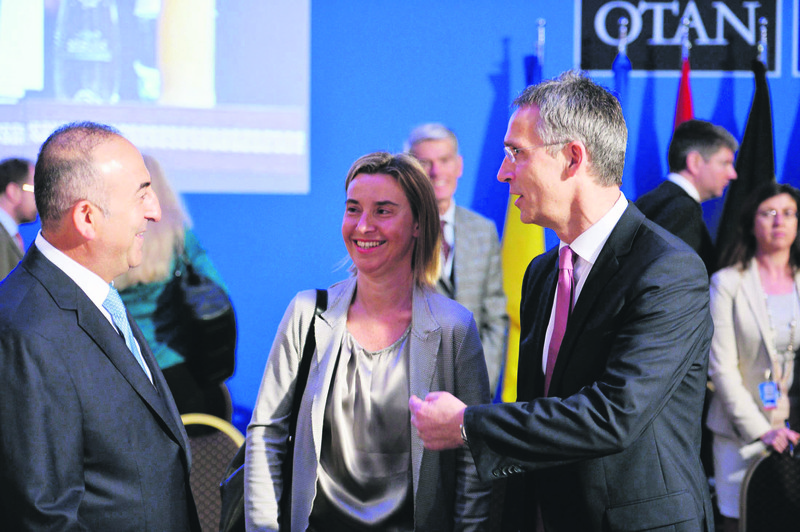 by Merve Aydoğan May 14, 2015 12:00 am
On the second day of the NATO Foreign Ministers Meeting, held in Turkey's Mediterranean province of Antalya yesterday, a session focused on the NATO Resolute Support Mission based in Afghanistan. In addition, Secretary-General Jens Stoltenberg underlined to members of the media that one of the most important issues at the meeting will be how NATO can do even more in fighting terrorism and the militant Islamic State of Iraq and al-Sham (ISIS). The summit continued with a meeting of the North Atlantic Council followed by Stoltenberg's press conference, where he commented on the growing migrant crisis in European Union countries.

On its second day, the meeting saw Foreign Minister Mevlüt Çavuşoğlu, Greek Foreign Minister Nikos Kotzias, NATO chief Stoltenberg and High Representative of the EU for Foreign Affairs and Security Policy Federica Mogherini singing "We Are the World." During a dinner and social night program in Antalya on Wednesday, Turkish pop music orchestra, Enbe Orchestra, together with Çavuşoğlu attempting to thank the attendees, resulted in the orchestra's vocalist requesting to sing with the minister.

Commenting on a comprehensive response towards migrants by the EU, Stoltenberg said on Thursday he welcomes the efforts of the EU, and the issue was also discussed at the summit meetings. In regards to cooperation with Russia against ISIS or any other relevant terrorist organizations, Stoltenberg said that NATO's stance against Russia remains as practical cooperation is suspended.

Also on Thursday, Çavuşoğlu met with Danish Foreign Minister Martin Lidegaard. They reportedly discussed bilateral relations between the two countries. Following his meetings, Çavuşoğlu held a press conference to discuss the assessments, and said that the Antalya summit has been an unforgettable NATO summit.

Regarding the train-and-equip program that has been topping Turkey's political agenda, NATO's top commander in Europe and U.S. General Philip Breedlove spoke to the media in Antalya and said that all preparations have been made for the program, but that there are some details remaining that need to be addressed. He said: "We are in consensus with Turkey in regard to choosing who from the Syrian opposition forces will be trained. Turkey is an important ally and is located at a tough geographical location."

During the two-day summit, foreign ministers from NATO countries decided that the alliance will maintain a presence in Afghanistan after the end of its current mission "Resolute Support." In addition, Stoltenberg urged allies to build closer cooperation with partners and organizations to better address the security challenges to the east and the south. Regarding the crisis in the Ukraine, the foreign ministers have reconfirmed their full support for Ukraine's sovereignty and territorial integrity, and called on Russia to cease its destabilization of eastern Ukraine with Stoltenberg calling for the full implementation of the Minsk Agreements.
Last Update: May 15, 2015 10:46 am
RELATED TOPICS