‘Pakistan and Turkey are two leading countries in the Islamic world' 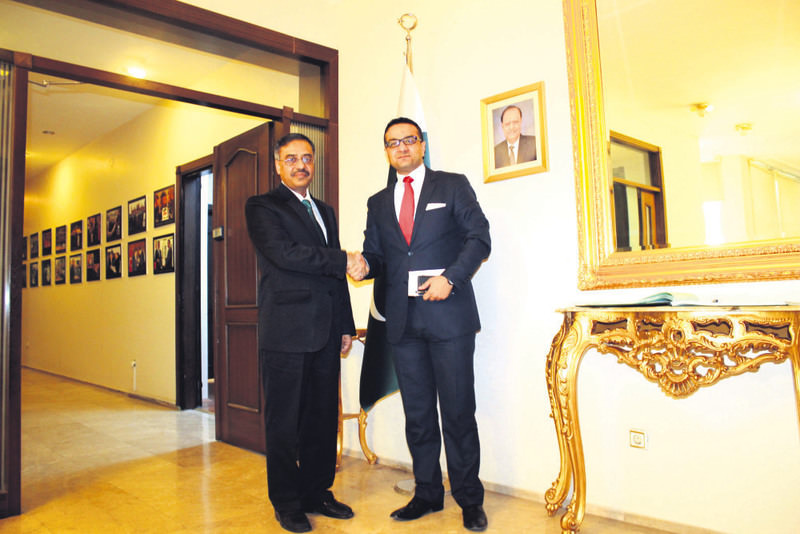 Pakistan and Turkey have a strong political relationship established through their common faith, shared history and cultural bond. However, this political relationship of an exceptional nature could not ensure full-fledged cooperation due to existing constraints. In February, prime ministers of the two countries, Ahmet Davutoğlu and Nawaz Sharif, agreed to prioritize bilateral relations to overcome the said constraints. Daily Sabah spoke with Sohail Mahmood, ambassador of Pakistan to Turkey, about a spectrum of topics, including relations between Turkey and Pakistan, regional developments such as Iran's nuclear program and Yemeni crisis and Pakistan-India relations.

- Pakistan and Turkey enjoy good relations and both countries define each other as sister countries. Hence, how do you believe that relations can be enhanced further?

Pakistan and Turkey enjoy a unique relationship in inter-state relations; it is unique in terms of mutual trust, understanding and close cooperation. This relationship has a solid foundation based as it is on common faith, shared history and cultural affinities. Our long-standing relations span diverse areas – from political to economic, to defense and security, to education and culture. Pakistan and Turkey work closely in the United Nations and other international and regional organizations. Both countries support each other on issues like Kashmir and Cyprus and have similar perspectives on regional and international issues. It is possible, and indeed highly desirable, to further deepen this already close relationship by realizing the untapped potential in various areas. And this is the concerted effort on both sides.

Both countries seek to further relations by increasing bilateral trade and deepening economic cooperation. In this regard, a number of steps have been initiated. Prime Minister Davutoğlu, for example, was in Pakistan for co-chairing with Prime Minister Nawaz Sharif the fourth meeting of the High Level Strategic Cooperation Council (HLSCC) in February 2015. Both prime ministers placed the highest priority on increasing bilateral trade and commercial ties. A consequential decision was taken to initiate negotiations on a free trade agreement (FTA). It was also agreed to promote mutual investments and strengthen collaboration in the areas of energy, infrastructure, transportation, agriculture and so on. The overall effort is to intensify mutual cooperation in all fields and impart a strong economic content to the relationship. The vision is to transform this long-standing, cordial relationship into a comprehensive and robust economic partnership.

- Total trade volume between the two countries is currently about $1 billion and does not reflect the strong political relations. What are the limitations for further improvement?

There are a number of factors relevant in this context. Firstly, the private sectors in both countries have traditionally focused more on other markets, rather than each other's. Secondly, the absence of direct transportation links has been a serious constraint. Thirdly, despite efforts, there is still a lack of better understanding about the vast opportunities existing in the two countries. Then, there are safeguard duties on textiles acting as a constraint in the way of enhanced trade. The issue of low trade volume was a subject of discussion between the two prime ministers in February, and a series of steps were considered, including enhancement of transportation and communications links. As I have mentioned, creating a new legal framework for freer trade in the shape of a free trade agreement was also agreed. All of these are very important steps towards addressing the constraints and building a deeper economic partnership between the two countries.

- Negotiations on a preferential trade agreement (PTA) between the two countries have been continuing for several years but the agreement has not been inked yet. What is the latest on the PTA talks?

We had several rounds of negotiations on a preferential trade agreement; however, what the two prime ministers decided in February 2015 was to transform this process into an entirely new and more substantial one. Now, as I have noted, the two countries are focused on having a free trade agreement, which would be much wider in scope, befitting the close relationship between Pakistan and Turkey. It is envisaged that the FTA would cover trade in goods, services and investments. We believe the leadership in both countries is committed to completing the FTA process on a fast-track basis and forging an enhanced economic partnership.

- You have mentioned previously that Turkey and Pakistan work closely in the United Nations. As you know, Turkey is in favor of reforming the U.N. Security Council. What are Pakistan's views on this issue?

Pakistan and Turkey have similar views on reforming the U.N. Security Council. Both countries are members of Uniting for Consensus (UfC), which is for comprehensive U.N. reform and for making the Security Council more representative, democratic, effective, legitimate and accountable to the general membership. We believe there should be expansion only in the number of elected (non-permanent) members. This would not only prevent the expansion of a privileged group of countries, but would also enable other important countries of the world to serve on this most important forum with the primary responsibility for maintenance of international peace and security.

- Turkey and Pakistan are backing efforts to restore order in Yemen. Do you think these efforts will be successful? What can be done to further the regional stability?

Turkey and Pakistan have been in consultations at the highest level regarding the situation in Yemen. Prime Minister Nawaz Sharif visited Ankara in this regard on April 3, and the leadership in the two countries has since been in regular contact. The deteriorating situation and the sectarian dimension has been a matter of concern for both Pakistan and Turkey. The effort has been to promote dialogue for a political solution. The international community acted in concert and the U.N. Security Council adopted an important resolution that has been welcomed by both Pakistan and Turkey. The recent ceasefire announcement is also a very encouraging development. Pakistan and Turkey are two leading countries of the Islamic world. Their close cooperation and coordination not only contribute to a peaceful resolution of this issue but also reinforces efforts for regional peace and stability.

- Although Iran and the P5+1 have signed a nuclear agreement, criticisms from both sides are on going. How do you believe that the deal is promising for the future of the region?

Pakistan welcomed the preliminary understanding reached between Iran and the P5+1. It is our earnest hope that the parties concerned would be able to achieve a comprehensive agreement. Pakistan has consistently supported peaceful resolution of the Iranian nuclear issue through dialogue. Faithful implementation of any such agreement would contribute to peace and stability in the region.

- What is the current stage of the peace talks with the TTP (Pakistani Taliban), which started last year? How do you evaluate the future of the process?

Pakistan has suffered grievously from extremism and terrorism over the past decades. Tens of thousands of Pakistani citizens and security personnel have been martyred in the fight against this scourge. You would recall the horrendous attack on a school in Peshawar last December, which shocked the entire world. As for your question, the government had initially tried to reach out and hold peace talks; unfortunately, this gesture was not reciprocated in any good measure. While the effort was made for talks, the terrorist attacks continued. Eventually, the government reached a point where an operation was deemed necessary. In June 2014, Operation Zarb-e-Azb was launched, and it continues to date. The primary objective has been to clear areas in North Waziristan. Also, across the country, intelligence-led operations have been conducted and impressive results achieved. The nation's resolve for eliminating this scourge continues to be firm and unshakable.

- What is the current situation in relations between Pakistan and India? From your perspective, how can Pakistan resolve the disputes?

Prime Minister Nawaz Sharif, since he assumed office in June 2013, has pursued his vision of a "peaceful neighborhood." In this context, he reached out to Pakistan's immediate neighbors, including Afghanistan and India. The effort of the prime minister was to pick up the thread from where it left off in 1999 in terms of dialogue with India and peaceful resolution of all outstanding issues, including Kashmir. The prime minister promptly congratulated Mr. Modi upon his electoral victory and later made the gesture of going to New Delhi to attend his swearing-in ceremony in May 2014 as well. The two prime ministers agreed to resume dialogue at the level of foreign secretaries. Unfortunately, we saw that this commitment was not fulfilled, and the FS-level talks were abruptly cancelled on the pretext that our high commissioner had met with the Kashmiri leadership, although this was not something new. Nonetheless, it remains our endeavor to see the resumption of composite dialogue process. Pakistan remains ready for peaceful, negotiated resolution of all outstanding issues with India, including the issue of Jammu and Kashmir, in accordance with the U.N. Security Council resolutions and the aspirations of the Kashmiri people. We believe a fair and lasting solution for Kashmir is essential for durable peace and stability in South Asia.

- Both countries share a tremendous accumulation of Islamic culture from the past. How do you think these two countries can cooperate more in the context of cultural issues?

Culturally speaking, Pakistan and Turkey are very close to each other. The cultural connection between our two peoples spans centuries. The Mughal Empire in the subcontinent was established by Babur Shah, who came from Ferghana. Since then, connections between the Muslims of South Asia and the Turkic people of Central Asia have been very strong. These are reflected in our language, in our literature, in our architecture and in our way of life. Similarly, there is a strong spiritual connection between our national poet Iqbal and Mevlana Rumi. Generations of people, men of letters, have been inspired by the literary works on both sides. I would say that both countries and both governments are conscious of this precious shared cultural tradition and are making concerted efforts to increase cultural collaboration. The High Level Strategic Cooperation Council, which is co-chaired by the two prime ministers, has cultural cooperation as one of its key agenda items. The two countries have a joint working group on culture. In its meeting last February, this working group took a number of decisions that were reflected in the joint declaration signed by the two prime ministers. It inter alia envisages the establishment of cultural centers in both countries, seminars on Iqbal and Rumi, preservation and restoration of historical buildings and so on. I wish to underline that cultural collaboration is a very important part of our efforts to intensify bilateral cooperation and our endeavors in this direction will continue with all possible vigor.

- There have been increased numbers of Pakistani students studying in Turkish universities in recent years. How do you evaluate it and do you think that Turkey is becoming a brand of education in the region?