US, Turkey agree on need to topple Assad and eradicate ISIS, says Obama's envoy on Syria 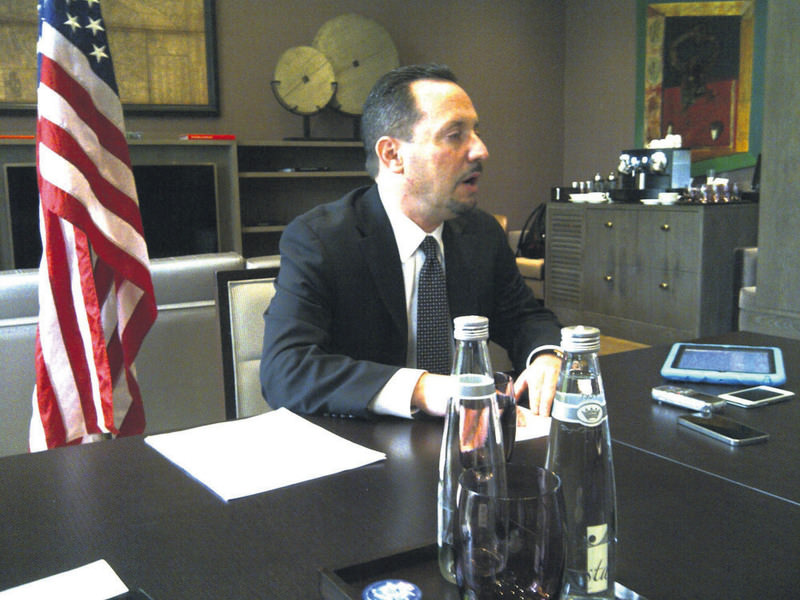 by Emre Gönen May 20, 2015 12:00 am
As part of ongoing efforts to bring about a political solution to the Syrian conflict, U.S. Special Envoy to Syria Daniel Rubinstein traveled to Turkey to participate in U.N.-led consultations on Syria. In his visit, he gave his positive views on the cooperation with Turkey on Syria and stated that Turkey should not be blamed for passage of foreign fighters joining ISIS – many of whom are Western citizens – and the issue is a significant problem for the entire global community.

Rubinstein's trip has been interpreted by experts as a reaffirmation of the U.S.' strong commitment to working with the international community and the moderate Syrian opposition to create conditions for a negotiated political transition as the only means to end the ongoing conflict and to help Syrians lay the foundation for a free, democratic and pluralistic future. The U.S. remains firmly of the belief that Syrian President Bashar Assad has no role in Syria's political future.

During a meeting in Istanbul on Wednesday, Rubinstein appeared extremely concerned about the urgent situation, underlining that no one was pleased with the turn of events and the huge impact it is having on Syria and its neighboring countries. He stressed the huge impact of refugees on Turkey and other countries.

Rubinstein was very clear on the three points that first, Assad has lost all legitimacy in view of the brutal and violent response he has given to the very legitimate aspirations of his people; second, that terror organizations such as the Islamic State of Iraq and al-Sham (ISIS) are to be fought against as well as the Assad regime and there is no future for them in a peaceful and united Syria, and third, that there is no military solution in Syria to the existing turmoil.

He heavily insisted upon forging a political solution. To the questions of how a political solution can be obtained in the situation of terrible warfare, he replied that there were many different tools of pressure upon one's regime – political pressures, economic pressures or underground pressures.

Rubinstein made it very clear that the stance of the U.S. administration on two important issues – that no one country was able by itself to solve the situation, therefore any solution would need robust collaboration between allies first, then also the responsibility of non-allied countries vis-a-vis the humanitarian disaster, and second, that the U.S. administration would consider any partner within Syria as reliable so long as they are not related to a terror organization, of which al-Nusra Front is included, and they respect the diversity and the unity of Syria.

He put emphasis on the fact that it would be ultimately up to the Syrian people to decide whether a political movement was dependable or not when time the comes to enjoy a modicum of peace. It is obvious that today's Syrian opposition that oppresses other Syrians in occupied territories will not be seen by the Syrians themselves as moderate.

He praised the collaboration between the U.S. and Turkey at the political, diplomatic and military levels and said that contacts were held at every level, in a very dense and very collaborative way.

Concerning the difference of attitude between Turkey and the U.S., Rubinstein preferred to say that huge efforts were spent together and there was very important cooperation, a "tremendous collaboration" was in place. He also said that Turkey and the U.S. have a "common vision" of the developments in Syria. He said that armed groups who ultimately have a democratic vision of a diverse, unified Syria could also be seen as moderate opposition.

He cautiously avoided to incriminate the Turkish government regarding the passage of foreign fighters through Turkey, saying that most of the foreign fighters originated from Western countries, with some of them being successful to crossing through Turkey whereas a large number have been apprehended. He then said that there should be no single country in charge of such a situation, but that it is rather a common, global challenge for all countries wishing to see peace established in Syria.