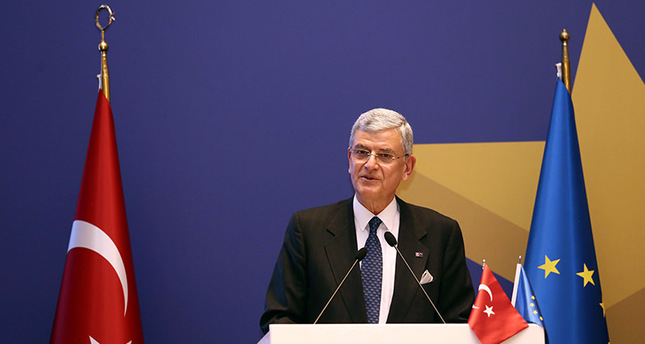 While Turkish government officials continuously emphasize that the EU must remove the double standard on Turkish citizens, Bozkır on Friday said: "They say 'if we lift the visas, the first day 10 million, later 5 million, and after that another 25 million Turks will migrate to Europe and European markets will be invaded.' There is such fear there. What would we do there, Europe is lacking in jobs." He further added that the EU needs to diversify its cultural mosaic rather than being a union of Christian countries, which would help to find solutions to the radicalization and terrorism it faces and sees as a threat, and "Turkey is the only country that can establish this in Europe," he said.

Visa liberalization for Turkish citizens has become an ongoing topic of discussion and a highly significant matter in Turkey's EU accession process. In this regard, the European Commission launched a visa liberalization dialogue with Turkey on Dec. 16, 2013, setting out a list divided into five chapters of what Turkey must achieve to enable Turkish citizens to travel to the EU without having to obtain a visa. The dialogue was initiated in parallel with a Readmission Agreement that would result in illegal migrants who enter Europe via Turkey returning to Turkey. The agreement is expected to come into effect on Dec. 16, 2016. Foreign Minister Mevlüt Çavuşoğlu had also announced in early March that Turkish citizens will be able to travel without a visa in EU Schengen countries within three years.

Commenting on the reunification talks for the decades-long dispute on Cyprus, Bozkır said the issue will be resolved by the end of this year and that as a result of this resolution 14 chapters have been opened while 17 others are expected to be opened soon. Turkey applied for EU membership in 1987, but the Cyprus issue remains a major obstacle to Turkey's bid to join the 28-country bloc. To gain membership, Turkey must successfully conclude negotiations with the EU in 35 policy areas, or chapters, which include reforms and the adoption of European standards.