‘Right time to take MIKTA to the next level,’ says Korean FM 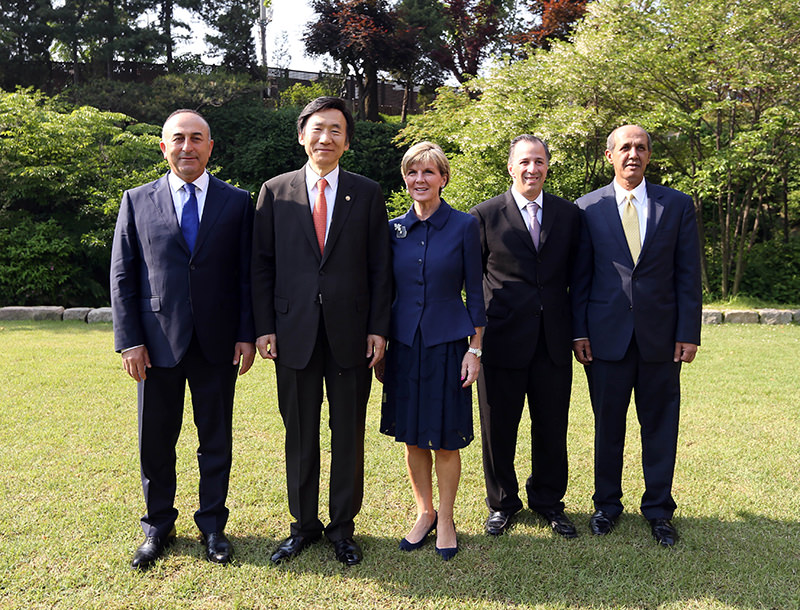 | AA Photo
by Ali Ünal May 22, 2015 12:00 am
The fifth MIKTA Foreign Ministers' Meeting, an informal cooperative body created by Mexico, Indonesia, the Republic of Korea, Turkey and Australia in September 2013 to enhance coordination on global issues of common interest, took place in Seoul on May 22.

Speaking at the beginning of the meeting, Korean Foreign Minister Yun Byung-se said that the evolving process of MIKTA is "significant," and that the group has come a long way in conceptualizing and institutionalizing MIKTA, even informally, since the first meeting in 2013.

"MIKTA is still an evolving process, and has already become a unique, cross-regional group, with an exquisite balance of diversity and commonalities. Indeed, MIKTA's rise has been nothing less than meteoric," host of the event, Minister Yun Byung-se said on Friday. Underlining that there has already been favorable comparisons made between the potential of MITKA and BRICS, Yun Byung-se said that the international community has high expectations for MIKTA.

Byung-se claimed that the adoption of the MIKTA Vision Statement was a significant milestone that will help boost MIKTA's visibility. "The vision statement will crystallize MIKTA's identity as a constructive agenda-setter in reforming global governance, as well as a bridge-builder between developed and developing countries," he said. Describing the enhancement of MIKTA's utilities, solidarity and connectivity as their main objectives, the Korean foreign minister added that MIKTA has a singular competitive edge over a broad range of global issues owing to the distinct perspectives and experiences of the members. "As a matter of fact, in the course of our ministerial meetings, we have been dealing with issues such as U.N. Security Council reform, peace-keeping, counter-terrorism, migration in Syria and Myanmar, development cooperation, climate change, cyber threats and the Ebola outbreak." he said.

"MIKTA is truly going from strength to strength at an amazing pace. Now, I believe that it is the right time for us to take MIKTA to the next level. In this regard, I would suggest that we need to think about how to upgrade MIKTA's discussions. For instance, we could use occasions such as the upcoming U.N. General Assembly or the G20 as well," he added.